A labor of love over many years Explaining It to Someone: Learning From the Arts has been published and is available from Amazon in paperback at $18.95.  For those more digitally inclined, there is also a $3.99 Kindle edition. 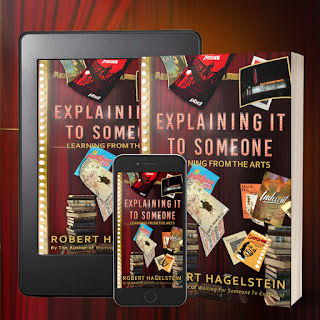 The book’s very detailed Table of Contents serves as an index to the hundreds of writers, playwrights, songwriters, musicians, and performances that are described or reviewed.

The book began with the writing of this blog itself.  As a publisher, I have always been interested in good writing and meaningful reading but never imagined that I would have the creative juices to write myself, in particular the freedom from self censorship.  A writer’s life is not private, even if writing only fiction.  This blog was a liberating factor as it offered a platform for the discipline needed to write.

I was particularly influenced by a book I read long before, Brenda Ueland’s, If You Want to Write; A Book about Art, Independence and Spirit, first published in 1938.  She threw down the gauntlet for me: “At last I understood that writing was about this: an impulse to share with other people a feeling of truth that I myself had. Not to preach to them, but to give it to them if they cared to hear it. If they did not – fine. They did not need to listen. That was all right too…. You should work from now on until you die, with real love and imagination and intelligence, at your writing or whatever work it is that you care about. If you do that, out of the mountains that you write some mole hills will be published…. But if nothing is ever published at all and you never make a cent, just the same it will be good that you have worked.”

I emphasize the last few words as they encapsulate my life.  To me it was not good enough to be the passive recipient of the cultural advantages I had in my life.  I felt compelled to share them, analyze them, say what they meant to me, and convey my unabashed exhilaration.

What I cover in Explaining It to Someone is eclectic to be sure.  It’s easier in many ways to deal with the works of a single writer.  Most of the work is related by the tether of my life experiences.  And, this is what distinguishes it from other works of criticism; I often relate it to personal experiences and the times.  These are times we all share.

When I read James Salter’s All That Is several years ago, the seeds of my (now) two published books were planted.  I ruminated over Salter’s epigram from this, his final novel, written thirty years after his last published work:

This made such an impression on me that I adopted his epigram for Explaining It to Someone as well. Yes, I said to myself, it is all well and good that I write this blog, but as a publisher, with deep roots in print editions, the digital world seems ephemeral.  Not that I have illusions that by appearing in print my writings magically become long-lived.  But they were NOT a dream, they ARE real and it is GOOD that I have worked.  It seemed inevitable that this volume, in particular, find its way to print (although editing concessions were made, and a Kindle edition exists as well). 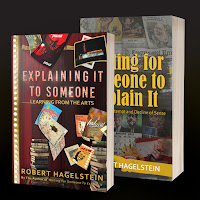 Although it is a companion work to my previously published Waiting for Someone to Explain It: The Rise of Contempt and Decline of Sense, it stands on its own.   Waiting for Someone is all things political and economics, borne out of frustration and disillusion, while Explaining It to Someone was written with passion about the arts.

It is ironic that I have chosen the non-traditional publishing route.  I did not see the commercial prospects of successfully landing this with a trade publisher or even a small press.  And I did not want constraints as to length, organization and content.  The irony about using the Amazon publishing platform is at one time during my publishing days, I dealt with Jeff Bezos, the founder of Amazon when he was on his way up in the mid 1990’s (or perhaps I should say, up, up, and away!).

Little did I know that 25 years later they would become my publishing platform and Bezos the richest man in the world; unthinkable, and just over the last third of my life.

Using their platform and making your book professional requires either learning publishing software or hiring an intermediary to generate the two files that are necessary, one for on demand physical books and the other for the Kindle.  (Again, another irony not lost on me is a 1984 issue of Publishers’ Weekly carried an article on my vision for printing on demand).  I could learn the software, many people do, and if I was younger and wanted to spend precious time, that would have been my preferred route.  Instead I hired a company that specializes in the conversion process, BooknookBiz.  They have been very professional and I have a nice relationship with the owner, “Hitch.”  I enjoy our banter back and forth, her up to date digital knowledge vs. my circa 1960 -1970 production knowledge, the days when I was a “production guy.”

They initially estimated the present book would set out to 714 7 x 10” pages, way, way too large for me.  That’s when my antiquated production knowledge was brought to bear on the problem, resulting in an acceptable compromise, still a large book, 516 pages 6 x 9” and densely set, but readable. This relationship was reminiscent of the time when I handled printing and binding vendors, mostly in Ann Arbor, Michigan.  Gone, gone are those days, but the memory lingers on.

The manuscript for this book went through three different editing passes before it was even submitted for conversion, and a major organizational effort (many thanks to my wife, Ann for her enduring help and insight).  In some respects it has the characteristics of a reference book because of the detailed table of contents. The more challenging post conversion issues were with the Kindle edition’s content page hyperlinks “landing” on the right spot in the 245,000 word text.

This might be the last book I write or the penultimate one, as I am thinking more about fiction and memoir perhaps in a couple of years if time and health are good to me, problematic given age and the pandemic, the latter being the stuff of dystopian science fiction only a few months ago.

What I have to say in this book will be the formative foundation of any I might tackle in the future.  Indeed, most of the writers and musical artists I cover in Explaining It to Someone; Learning From the Arts are my teachers and I am their grateful and humble student.