I left the Aegean Adventure post in the middle of our trip, with a promise to cover our remaining days in the Greek Islands, Dubrovnik, and, finally, Athens. Today, southern Florida is in its 10th day of temperatures near freezing at night, a record, and, so, what better time to recall the warmth of the Aegean Sea?

The Greek Islands in particular were stunning in their beauty, the timelessness of its towns meeting the sea, the ubiquity of its churches juxtaposed to medieval walls, evidence of conflicts of previous civilizations. In Croatia, the walled city of Dubrovnik shows not only the mark of ancient wars, but the recent flack scars of the Serbian siege of 1991 as well. And Athens, understandably mobbed with tourists such as us, majestically marks the foundation of Greek civilization. Searching for a leitmotif in this experience, I cannot help think of the scores of generations that have come and gone on these ancient lands, the lives, and the births and deaths of an endless parade of now anonymous individuals as well as the notables marked by stone monuments.

I mentioned that while we were touring, I was reading John Updike’s Self Consciousness, the closest he ever came to writing an autobiography. There are so many passages that I underscored in the book, ones I will want to return to, I ended up noting as much as I failed to note. But some of his writings on religion and mortality as well as the craft of writing, struck a particularly sensitive cord with me while visiting these places, the evidence of civilizations we saw, so I am going to defer to Updike and allow his words to resonate at the end of this post, while some of my photographs offer their own viewpoint.

One of the Seven Wonders of the Ancient World, the Colossus of Rhodes, once bestrode the harbor of Rhodes. We visited the old town that is contained within its medieval walls. 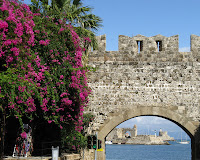 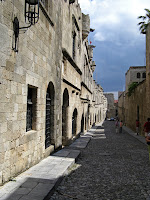 Rhodes Street of the Knights


Delos, a small rocky island, but to the Greeks a sacred place as Apollo and Artermis were said to be born there.

Mykonos is one of those picture post card islands whose Cycladic architecture and narrow streets makes every turn a photo-op. A young woman even wanted to show off how she filled out her bathing suit in a doorway, and was eager to pose. 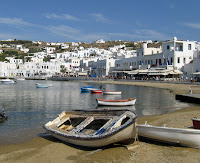 Mykonos Church of the Panagia

Santorini is another such island, built on the ring of a volcanic crater, the main town of Oia rising dramatically from the sea 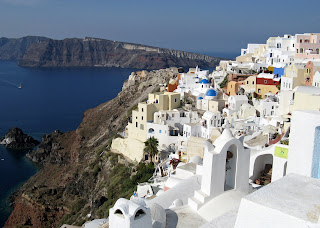 Santorini on the Edge of the Caldera 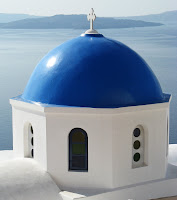 Olympia, the site of the ancient Greek Games, is a sanctuary associated with the games and the worship of the Greek Gods. To stand on the remaining site of the stadium where the events were held, is awe-inspiring.

We loved Dubrovnik, Croatia. Our wine steward aboard the ship was Croatian so we had already felt a deep affection for the long suffering of the Croatian people and their city, which has been a focal point of conflict and conquering forces. 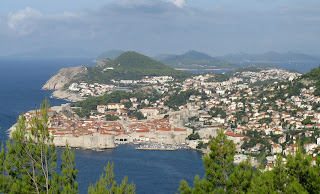 
In Crete we bused to the Lassithi Plateau and toured its ancient windmills, returning to the city of Aghios Nikolaos on the islands eastern side.

Walking up the steps to the Acropolis with thousands of other tourists, the city of Athens below, made me think of the march of civilization and the inconsequentiality of our own steps in this procession. 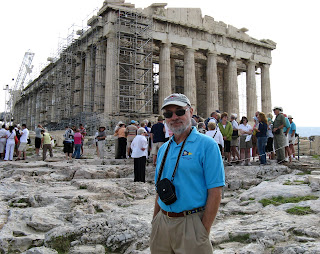 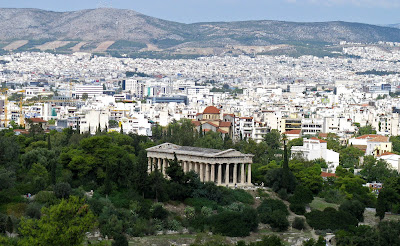 From John Updike’s Self Consciousness; A Memoir (Knopf; 1989)

On Religion and Mortality…

“…The idea that we sleep for centuries and centuries without a flicker of dream, while our bodies rot and turn to dust and the very stone marking our graves crumbles to nothing, is virtually as terrifying as annihilation. Every attempt to be specific about the afterlife, to conceive of it in even the most general detail, appalls us.”

“Not only are selves conditional but they die. Each day, we wake slightly altered, and the person we were yesterday is dead. So why, one could say, be afraid of death, when death comes all the time? It is even possible to dislike our old selves, those disposable ancestors of ours. For instance, my high-school self – skinny, scabby, giggly, gabby, frantic to be noticed, tormented enough to be a tormentor, relentlessly pushing his cartoons and posters and noisy jokes and pseudo-sophisticated poems upon the helpless high school – strikes me now as considerably obnoxious, though I owe him a lot: without his frantic ambition and insecurity I would not be sitting on (as my present home was named by others) Haven Hill.”

“For many men, work is the effective religion, a ritual occupation and inflexible orientation which permits them to imagine that the problem of their personal death has been solved. Unamuno: ‘Work is the only practical consolation for having been born.’ My own chosen career – its dispersal and multiplication of the self through publication, its daily excretion of yet more words, the eventual reifying of those words into books – certainly is a practical consolation, a kind of bicycle which, if I were ever to stop pedaling, would dump me flat on my side. Religion enables us to ignore nothingness and get on with the jobs of life.”

“Karl Barth…responding in an interview late in his life to the question about the afterlife, said he imagined it as somehow this life in review, viewed in a new light. I had not been as comforted as I wanted to be. For is it not the singularity of life that terrifies us? Is not the decisive difference between comedy and tragedy that tragedy denies us another chance? Shakespeare over and over demonstrates life’s singularity – the irrevocability of our decisions, hasty and even mad though they be. How solemn and huge and deeply pathetic our life does loom in its once-and doneness, how inexorably linear, even though our rotating, revolving planet offers us the cycles of the day and of the year to suggest that existence is intrinsically cyclical, a playful spin, and that there will always be, tomorrow morning or the next, another chance.”

“My success was based, I felt, on a certain calculated modesty, on my cultivated fondness for exploring corners – the space beneath the Shillington dining table, where the nap of the rug 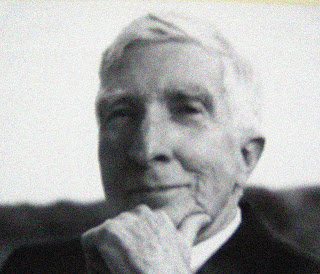 was still thick; the back stairs, where the vacuum cleaner and rubber galoshes lived; the cave the wicker armchairs made when turned upside down against the rain on the porch. I had left heavily trafficked literary turfs to others and stayed in my corner of New England to give its domestic news.”

“Celebrity, even the modest sort that comes to writers, is an unhelpful exercise in self-consciousness. Celebrity is a mask that eats into the face. As soon as one is aware of being ‘somebody’ to be watched and listened to with extra interest, input ceases, and the performer goes blind and deaf in his overanimation. One can either see or be seen. Most of the best fiction is written out of early impressions, taken in before the writer became conscious of himself as a writer. “

“I envision my paternal grandfather as having been, like me, bookish and keen to stay out of harm’s way; we aspired to the clerisy, and the price that we pay, we Americans who shyly wish to live by our eyes and wits, at our desks, away from the frightening tussle of human strength and appetite and intimidation and persuasiveness, is marginality: we live chancily, on society’s crumbs in a sense, as an exchange for our exemption from the broad brawl of, to give it a name, salesmanship.”

“So writing is my sole remaining vice. It is an addiction, an illusory release, a presumptuous taming of reality, a way of expressing lightly the unbearable. That we age and leave behind this litter of dead, unrecoverable selves is both unbearable and the commonest thing in the world – it happens to everybody. In the morning light one can write breezily, without the slight acceleration of one’s pulse, about what one cannot contemplate in the dark without turning in panic to God. In the dark one truly feels that immense sliding, that turning of the vast earth into darkness and eternal cold, taking with it all the furniture and scenery, and the bright distractions and warm touches, of our lives. Even the barest earthly facts are unbearably heavy, weighted as they are with our personal death. Writing, in making the world light – in codifying, distorting, prettifying, verbalizing it – approaches blasphemy.”
.
Posted by Bob at 11:57 AM