I have been retrospectively adding "labels" to my posts, a tedious process, and to use blog-speak, a "gadget" that is not as exacting as a proper index. As a former publisher, the inconsistencies of the labeling process bother me. This is partly my own fault as the labeling was done over several months. Consequently, as an example, President Barack Obama is merely labeled "Obama" while most luminaries are labeled by first and last names, an unintentional gaffe and no disrespect intended. I suppose I assumed we all know who he is. And unfortunately, labels are alphabetized as they appear so first names prevail, an affront to any indexer. But one can scroll over the list fairly quickly although there are more than three hundred labels at this point -- they appear on the left side of the page below "Blog Archive" and "About Me."

Reviewing my four plus years of postings in doing this project I see so much of what I wrote is where the winds blew me and some views have changed. But I intended "Lacunae Musing" as an "everyman's" view of the world going by, so the windblown nature is understandable and the mere passage of time explains some changed views. More painful was to see some repetition, not remembering that a year earlier I had made the same point, perhaps in a different way. Nonetheless, I have not edited or deleted any entries. Let some future generation unwrap this as a buried digital time box. It is what it is.

I expected the blog would mostly cover my diverse interests, but I was somewhat surprised by the number of entries that relate to the economy and politics. Sturm und Drang have characterized those topics during the past few years, so that is no wonder as well. Then there was the incredible open heart surgery I went through last year, a difficult procedure complicated by traumatic intubation so one could say I write this blog on borrowed time, although I feel fine now. Amazing having gone from this:

to this "self portrait" taken during our recent cruise: 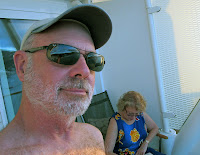 As an eclectic blog, "Lacunae Musing" does not have the level of page load activity associated by niche oriented blogs with a dedicated readership. But that's OK by me as I write this mostly as a personal journal and as a creative outlet. Sometimes I wonder if I never did this, and concentrated that same energy in other pursuits, such as the piano or even writing a novel or a play, something I've been tempted to do, perhaps that might be a better use of my time. Or maybe this blog is my excuse for not doing something even more challenging. One will never know unless I find the path to an alternative universe.

However, while writing this blog, I did manage to dramatize four Raymond Carver short stories which I entitled When We Talk About Carver. This consists of dramatic readings of "Want to See Something?" and "Gazebo," each preceding a play adaptation, the former with "Put Yourself in My Shoes" and the latter with "What We Talk About When We Talk About Love" -- perhaps Carver's best known story. As the production requires only two male and two female actors, I thought it would be ideal for smaller theater companies. This required getting permission from the author's estate and the approval (with revisions) of the author's widow, Tess Gallagher, which was finally successful. But my quest to place the play, even for a reading, has come to naught, and it is a lesson learned about how the system "works" (publishing in my days also had its "system" equally difficult to crack). I had naively believed that Carver, as one of the 20th century's greatest short story writers, and my painstaking attempt to use his exact words in the adaptation, would ensure, at least, a placement with a knowledgeable but small non-profit theatre. That is not how it works, and so I can imagine what the outcome might be if I was the author of a play rather than merely the adapter of a writer of Carver's prominence. It is disheartening, but a learning experience. But learning even with disappointing results is better than standing still.

Also, I've managed to keep up with my musical interests, working on several musical programs as I am a volunteer pianist at a local rehab center as well as at a retirement home. The latter gig is particularly fulfilling as I prepare specific programs, my first being the music made famous by Frank Sinatra, followed by one focused on the works of George Gershwin. The Gershwin program was challenging as it required a solid hour of playing his wonderful melodies, including those from Porgy and Bess which are among my Gershwin favorites. I'm now preparing programs by Rogers and Hammerstein (my next), to be followed by an all Steven Sondheim program, and finally a "British / French Invasion of Broadway" program, works by Andrew Lloyd Webber and Claude-Michel Schönberg.

So, "Lacunae Musing" continues to be one of many pursuits, and managing its time requirements is a constant battle. Consequently ,when I started this, I consciously turned off the comments feature of most blogs. However, an email address is included in the "about me" section, so there is a way for people to contact me and I've received many emails over the years and responded to all.

I integrated a "statcounter" about a year so I have a rough estimate that there have been almost 20,000 "hits" since the beginning, most of those from Google phrase searches but almost an equal number from searches of Google Images as I have hundreds of photos in the blog. Unfortunately, BlogSpot is not very user friendly for photographs. I would have carried more otherwise. And there are mysterious inconsistencies with photographs in the blog. Some can be easily enlarged by clicking onto it, and others cannot, even though I treat all work on photographs the same way.

It's been an interesting journey and now with the label "index" I can see the breadth and the focus (or lack of) more clearly. Whether you are a return visitor, or happened to just land here, I hope you find it useful or interesting. I doubt whether I will be able to keep up the pace of writing as I don't want to repeat much of the family history and I might take a little more time to smell the roses, but with the political season heating up, there will be unavoidable fodder for writing. Then, too, there will be more theater, the books I'll be reading, and future travel, whatever suits my fancy. Truly an eclectic journey, one person's views and experiences. Hopefully, it has some relevancy in the real world. 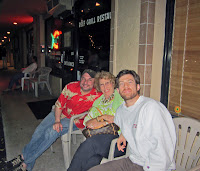 While writing this entry we had a rare concurrent visit of both our sons, our oldest, Chris, celebrating a birthday and so we went to one of our favorite local restaurants, Captain Charlie's Reef Grill. This is a down to earth, funky, lively restaurant with some of the best and most imaginative fish dishes anywhere. One can make a meal of the appetizers, each a unique creation. Part of the fun is even waiting for a table outside in the balmy Florida night. They don't take reservations. They don't have to. People will eagerly wait. We went on a Saturday night, happily passing the one hour wait time sitting on the outside chairs, while others were waiting in a separate bar they maintain a few doors down in the unassuming Juno Beach strip mall where the restaurant is located. The waiters and waitresses have been there forever and they've become old friends. It is a place to see and be seen and the desserts are fabulous such as their chocolate mousse b-day cake! 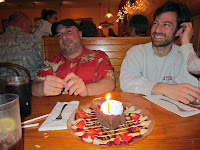