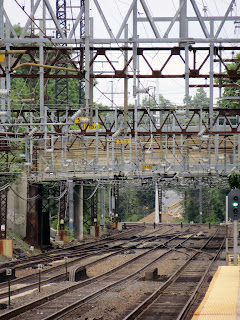 It is challenging writing while on the boat.  There is limited broadband connection, and it is frequently lost, so frustration is a prevailing theme.  And while we’re here for such a short summer, other activities compete for time.

Nonetheless, I don’t want to find an impossible chore when we return in the fall, so, as a placeholder, this is a relatively brief entry on the last week, for which I have about 150 photographs and I can only offer up a few, covering the huge canvas of, first, our day with our friends, Harry and Susan, at NYC’s Museum of Modern Art, and then, two days later, our trip to Boston, to see our son Chris, and our friends Bruce and Bonnie in Sudbury MA.

Several years ago I edited a collection, New York to Boston: Travels in the 1840's, which incorporated parts of Charles Dickens' American Notes (1842) and D. Appleton & Co.'s The American Guide Book (1846).  I’ve been fascinated by the history of the two cities (and the rivalry when it comes to baseball).  Visiting Boston again, but this time as a tourist, really brought home the differences, the influences of the English, vs. the Dutch on NYC. 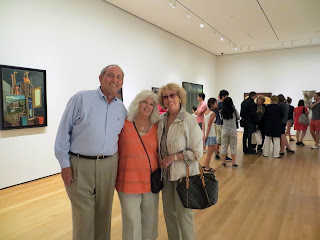 We ventured into New York for a day with Harry and Susan, lunch and dinner and in between, an exhausting tour of MOMA, not having been there for years and years.  Although it was a weekday, the throngs of people were overwhelming, not to mention the size of the museum as well.  It gave us a new appreciation of our local Norton Museum in West Palm Beach, much more negotiable.  But of course, nothing can compare with MOMA if you have the time and stamina.

After the New Haven railroad delivered us about ½ hour late, we finally made it to the Fireside Restaurant at The Berkshire Place on E 52 Street (where we had the pleasure of staying when I was in NYC for overnight business meetings).  It was “restaurant week” in NYC so we had a wonderful fixed price three course luncheon.  From there, it was a short walk over to the MOMA.  The photos below are just a few of the highlights (for me).  I hope to have more complete coverage later in the year. 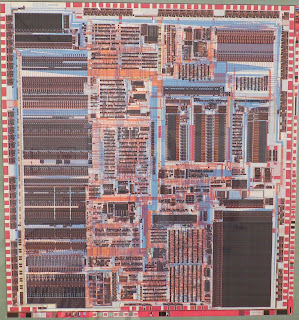 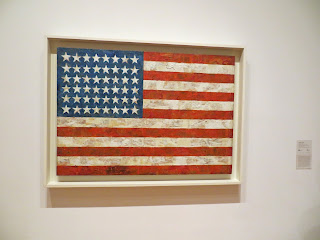 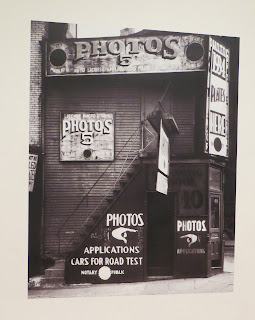 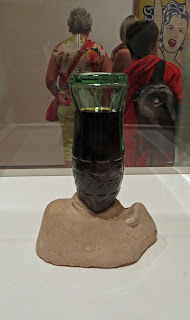 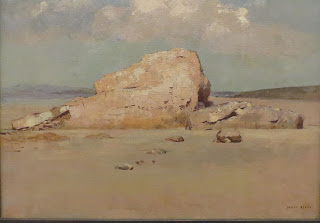 On the way back to Grand Central, we stopped at a fast food Hamburger Heaven for a light dinner.  NYC Hamburgers are the best and the ambiance of an old coffee shop allowed us all to linger and talk until it was time for us to catch our train and our friends to find their ferry back to Ft. Lee. 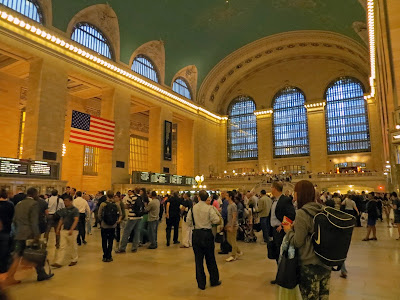 Two days later we drove to Boston, letting the GPS take us through the labyrinth roads of downtown, so evocative of London, to the venerable Parker House Hotel, which is an historical site onto itself.  Dickens stayed there and John F. Kennedy proposed to Jackie in a corner booth in the historic restaurant.  We saw the marble table on which none other than Hô Chí Minh rolled dough in the hotel’s bakery from 1911 – 1913. (Oh, the supreme ironies of life, that JFK had to deal with him some 50 years later as the North Vietnamese nationalist leader.) 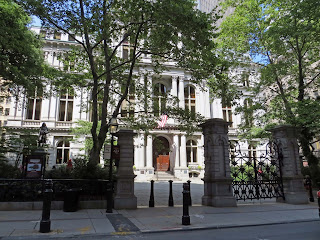 One of the main reasons for our visit was to see our son, Chris, who had recently moved to Cambridge and showed us his office in the historic Old City Hall, built in 1865, just one year before his great-great grandfather established his photography business in New York City.  We had two dinners with him and as a fish fanatic, I requested only seafood restaurants.  We had outstanding meals, the first at Dolphin Seafood in Cambridge and the next night at Scollay Square Restaurant which was right near our hotel, both reasonably priced and serving great fish. 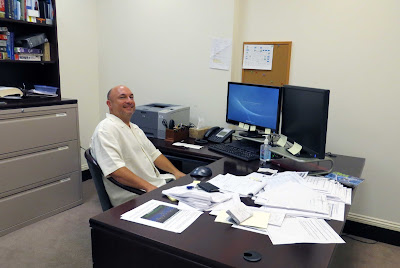 Boston is immersed in history, and in such a concentrated area within a short walking distance of our Hotel.  We tried to hit the highlights of the Freedom Trail, such as the Old South Meeting House, the Old State House, Paul Revere’s home, and, Faneuil Hall.  We were lucky to have ventured out early on Sunday morning, before the mobs descended, to Quincy Market and then to Faneuil Hall, a public meeting place which is still used to this day, where we had a private tour given by one of the Park Rangers.  (In the men’s room there was a sign which read “As the first President of Boston’s Board of Health, Paul Revere supervised the city’s privy (outhouse) inspectors, who made sure residents properly emptied out their privies and didn’t let them overflow.”) 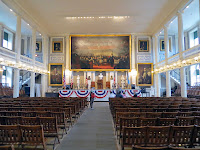 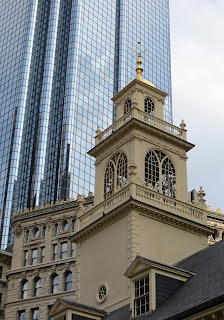 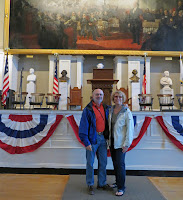 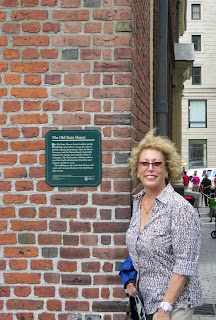 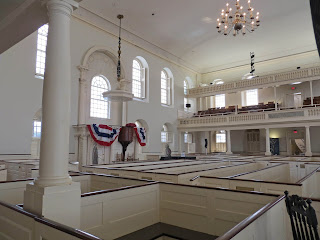 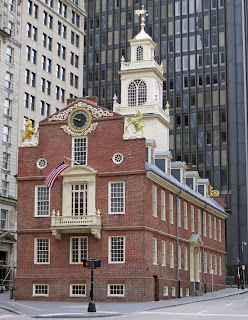 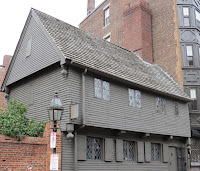 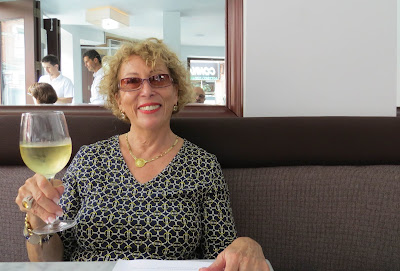 By Sunday afternoon the Hall became so crowded that we strolled down to the waterfront and sat with Chris, taking in the sights and sounds of Boston before our last dinner together.

Monday morning we drove to Sudbury to see my college friend, Bruce, and his wife, Bonnie.  I had last visited Bruce in his home half my lifetime ago, and was able to dig up a photo of that visit to juxtapose it to the present day.  I had remembered where the photo was taken, but not where we stood, and why that should matter, I have no idea – perhaps it was merely an exercise of Absurdism.  But here we are...
Then… 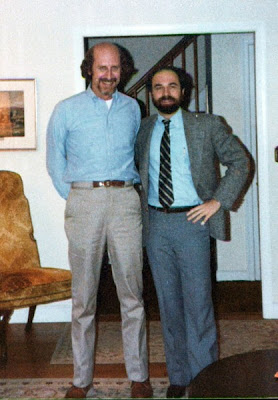 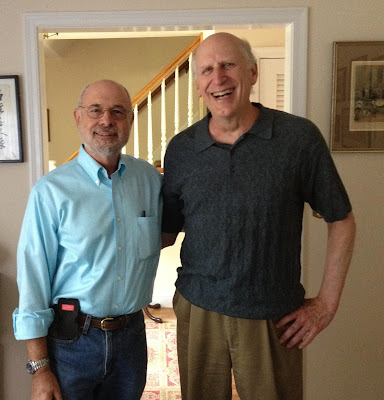 While we’ve changed physically (merely a little less hair), the years have not changed our outlook on life and the need to laugh at some of the same silly things we did as college students.  We four had a lovely lunch at, where else, Legal Sea Food in Framingham.

From there, it was back to the boat which we took out a couple of days later for a brief cruise on the Long Island Sound.