Ever since I first dealt with Amazon.com as a Publisher, sometime in the mid 1990’s, I also became their customer. Back then we were receiving regular faxed orders, usually for a few copies (with a photocopy of Jeff Bezos’ personal credit card!). I might have spoken to Bezos at the time, or one of his colleagues. Customer service, they explained, is their credo and they will build their business on that. We began to ship on open credit. The rest is history.

I buy most of my books from Amazon, frequently from their partners which costs nearly nothing, except shipping. It is sort of ironic as this can undermine prices on their Kindle, but given my interest in the physical book itself, the Kindle is not for me. I’m not a Luddite, but there is nothing like handling a printed book.

When we were recently in Asheville, we made our regular visit to Malaprop’s, one of the great remaining independent bookstores. They usually have a good selection of autographed copies and a couple of years ago I bought Russo’s Bridge of Sighs there. I was looking for Russo’s new novel That Old Cape Magic. Disappointed they didn’t have one this time, I sought out the next on my list, E.L Doctorow’s Homer & Langley. It is the best Doctorow novel I’ve read since Ragtime and the World’s Fair. 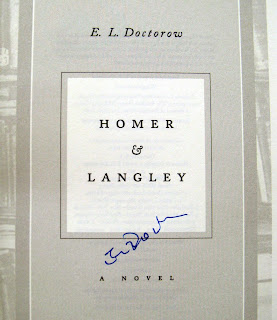 Reading an autographed copy has its drawbacks. No turning back corners to be able to find favorite passages. No reading on the beach. Handle with care. After reading, it belongs under glass like a museum piece.

The book itself is beautiful, printed on antique eggshell paper with a deckle edge, set in the Caslon type face, an old style face in the same family as Garamond, the classic crispness of which almost cries out to the reader to savor every word. And Doctorow’s writing is of museum quality too in its stark clarity and beauty. There are four main characters in the book, the brothers Homer and Langley Collyer, New York City, and Time (or the passage of the same).

Homer is blind but he is the one who can see truths as the book’s narrator and in various parts of the book is the one who leads the sighted. “People my age are supposed to remember times long past though they can’t recall what happened yesterday. My memories of our long-dead parents are considerably dimmed, as if having fallen further and further back in time has made them smaller, with less visible detail as if time has become space, become distance, and figures from the past, even your father and mother, are too far away to be recognized. They are fixed in their own time, which has rolled down behind the planetary horizon. They and their times and all its concerns have gone down together.”

A “Theory of Replacements” obsesses Langley, his older brother. “Everything in life gets replaced. We are our parents’ replacements just as they were replacements of the previous generation. All these herds of bison they are slaughtering out west, you would think that was the end of them, but they won’t all be slaughtered and the herds will fill back in with replacements that will be indistinguishable from the ones slaughtered.” Consequently, Langley lives his life collecting newspapers, categorizing stories, preparing what would be a “perpetual newspaper.” “He wanted to fix American life finally in one edition, what he called Collyer’s eternally current dateless newspaper, the only newspaper anyone would ever need. For five cents, Langley said, the reader will have a portrait in newsprint of our life on earth. The stories will not have overly particular details as you find in ordinary daily rags, because the real news here is of the Universal Forms of which any particular detail would only be an example. The reader will always be up to date, and au courant with what is going on. He will be assured that he reads of indisputable truths of the day including that of his own impending death, which will be dutifully recorded as a number in the blank box of the last page under the heading Obituaries.” Langley devolves into an antisocial eccentric, hoarding everything he finds, including his newspapers.

Doctorow’s story is somewhat based on the real life of the Collyer brothers who lived in New York City but it only serves as a loose sketch for the canvas of this tour de force. An odyssey of people, representative of time’s passing, drift in and out of their home, inherited from their parents, people from the depression, to WW II, to the Vietnam era, and the flower generation. While the brothers wage war with New York, the utility companies, and their neighbors, their home slowly degrades as time has its way and they withdraw from life itself.

Homer is a gifted pianist, the artist in the work, clearly Doctorow’s voice and sensibility. Homer has had one true love in his life, Mary Elizabeth Riordan, who, like everyone else in the novel, transits through the Collyer home never to return. She was his “prompter” in a silent movie theatre, whispering the changing scenes on the screen in his ear so he could play the appropriate music, his only job when he was younger. Then, she becomes his piano student and finally she leaves, becoming a Sister and a missionary in far away places, Homer occasionally receiving a letter. She is apparently murdered in Central America. Homer laments, “I am not a religious person. I prayed to be forgiven for having been jealous of her calling, for having longed for her, for having despoiled her in my dreams. But in truth I have to admit that I was numbed enough by this awful fate of the sister to be not quite able to connect it with my piano student Mary Elizabeth Riorden. Even now, I have the clean scent of her as we sit together on the piano bench. I can summon that up at will. She speaks softly in my ear as, night after night, the moving pictures roll by: Here it’s a funny chase with people hanging out of cars…here the hero is riding a horse at a gallop…here firemen are sliding down a pole…and here (I feel her hand on my shoulder) the lovers embrace, they’re looking into each other’s eyes, and now the card says…’I love you.’ ”

And as at the end of a silent movie the lens slowly closes and Homer cannot “see to see.”
.
Posted by Bob at 1:03 PM