Are we doomed to repeat history?

Entitlement: this is what passes as a “Constitutional Right” even as we, as a nation, confront potential existential threats to our “pursuit of life, liberty and the pursuit of happiness.”  The threats seem to be ubiquitous. Ones such as environmental degradation, political divisiveness, income inequality and racial injustice are long term, systemic, and need to be dealt with through legislation, the courts, and at the voting booth.  But another is immediate and it is a behavioral issue: COVID-19.  Changing behavior is not something that can be merely legislated or policed. It is more of a matter of acting with an esprit de corps.

During the Spanish Flu of 1918 there were no antibiotics, steroids, ventilators, and no “Hail Mary” prospects of an effective vaccine or even a therapeutic.  Some 675,000 people died yet that number would have been much higher had not certain measures been widely adopted.  Which ones?  You guessed it, wearing a mask, social distancing, use of disinfectants and cancelling schools and large public gatherings. It was proven then that social distancing works.

Even with the advantage of modern medicine, we have more than 125,000 deaths in the United States from CV-19.  This tally is already approaching 20% of the total of the Spanish Flu 100 years before, but we’re only four months or so into this pandemic.  And, the United States seriously trails other developed nations in controlling this, proving our utter ineffectual leadership.  One only has to compare our curve (which is really not a curve, but a flattening out and now another peak) to those of Europe, South Korea, Japan, and China.  No wonder we are now on the EU list of countries whose citizens are not welcome.

There are those who claim their right to not wear masks and to congregate in large crowds as being their “constitutional” right to do so (even our Vice President implied the latter last weekend).  In an embarrassing video of a recent Palm Beach County Commissioner’s meeting where they voted for mandatory face masks (as if there was any question), impassioned opposition comments included one woman saying it was equivalent to her being denied her individual freedom not to wear underpants.

No, lady, that is a false equivalency as not wearing underwear does not endanger anyone else. Perhaps she’s never heard of the “promoting the general welfare” clause which IS enshrined in the Preamble to the Constitution. (Indeed, there is nothing about wearing face masks or panties for that matter.)

We the people of the United States, in order to form a more perfect union, establish justice, insure domestic tranquility, provide for the common defense, promote the general welfare, and secure the blessings of liberty to ourselves and our posterity, do ordain and establish this Constitution for the United States of America.

The point is, in order to secure the common good in this pandemic, we all need to work together.   How in the world did we conflate not wearing face masks with an “individual liberty?” Perhaps it can be traced to our President’s statements and his behavior which his sycophants (such as our Florida Governor) mimic.  Our President even implied that some Americans might wear face masks not as a way to prevent the spread of CV-19 but as a way to “signal disapproval of him.” It’s always about him, not about our welfare.

During WW II Americans had to sacrifice for the common good.  Ration cards were given out for virtually every commodity.  Imagine if this generation was asked to sacrifice their “right” to fuel and sugar?  We would have lost that war and we are going to have more and more needless deaths in this CV-19 war because our lack of national leadership and thus our failure to pull together as a nation. Those who refuse to follow or deny scientific advice on attacking this critical threat are not patriots, but traitors.

Christmas Time is Here -- in Florida


Last year I posted my piano rendition of one of my favorite Christmas pieces, It’s Love –It’s Christmas, written by the great jazz pianist, Bill Evans.  You rarely hear it performed in the tsunami of holiday music that overwhelms airwaves at this time.  Another favorite is Vince Guaraldi’s Christmas Time Is Here, much more frequently performed.  No wonder, it was written for A Charlie Brown Christmas special in 1965.  Although Guaraldi’s music will always be associated with the Peanuts Christmas specials, he was a fabulous jazz pianist and composer in his own right, tragically and suddenly dying at the age of only 47 of a heart attack or aortic aneurysm.

So, in the spirit of a Florida Christmas, I offer my own piano rendition, nothing like the master Guaraldi’s, but just mine.  The lyrics are by Lee Mendelson, the producer of the Charlie Brown specials, who just happened to hear Guaraldi’s "Cast Your Fate to the Wind" on the radio and sought him out to compose the music for the 1965 special, and the rest is history.

Christmas time is here
Families drawing near
Oh, that we could always see
Such spirit through the year

And what would Christmas time be in Florida without the recent Boat Parade.  We had a view from the starting point at the North Palm Beach Marina, the parade preceded by fireworks.  Having had our most memorable Christmases in Connecticut, the contrast is, well, striking. 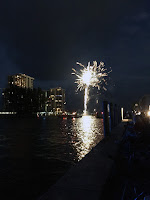 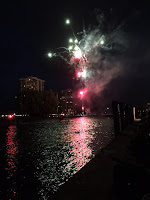 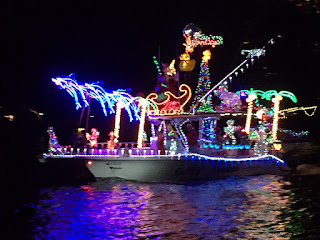 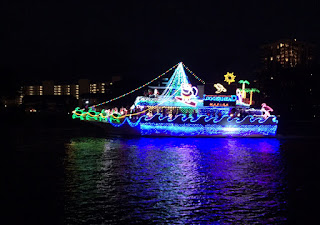 From Christmases past, this 1977 photo, Jonathan, Ann, me, our beloved Uncle Phil, and Chris… 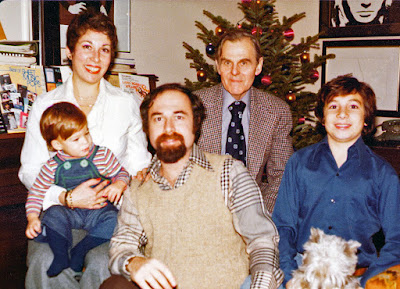 A Happy and Healthy Holiday to All!


While the winter has worn on and on "up there" (where we used to live), it is no wonder the visitors and the traffic in Palm Beach County has grown this year.  I still miss aspects of our former Connecticut winters.  Being younger helped and I found much of it to be a pleasant challenge, splitting wood for our wood burning stove, even shoveling the snow, and getting to work on the ice-slicked roads.  The one thing I do not miss is getting up on a ladder to pour boiling water into our gutters and downspouts to keep them clear of ice as snow was melting on the roof during the day and refreezing at night. I remember one very bad winter storm in the 1970's when Connecticut closed all roads and threatened to arrest any driver other than essential health and official personnel.  The only problem is I heard the announcement while I was sitting at my desk listening to a portable radio; I had already decided to close the office but I had to find my way home without getting arrested!  (I wasn't.) 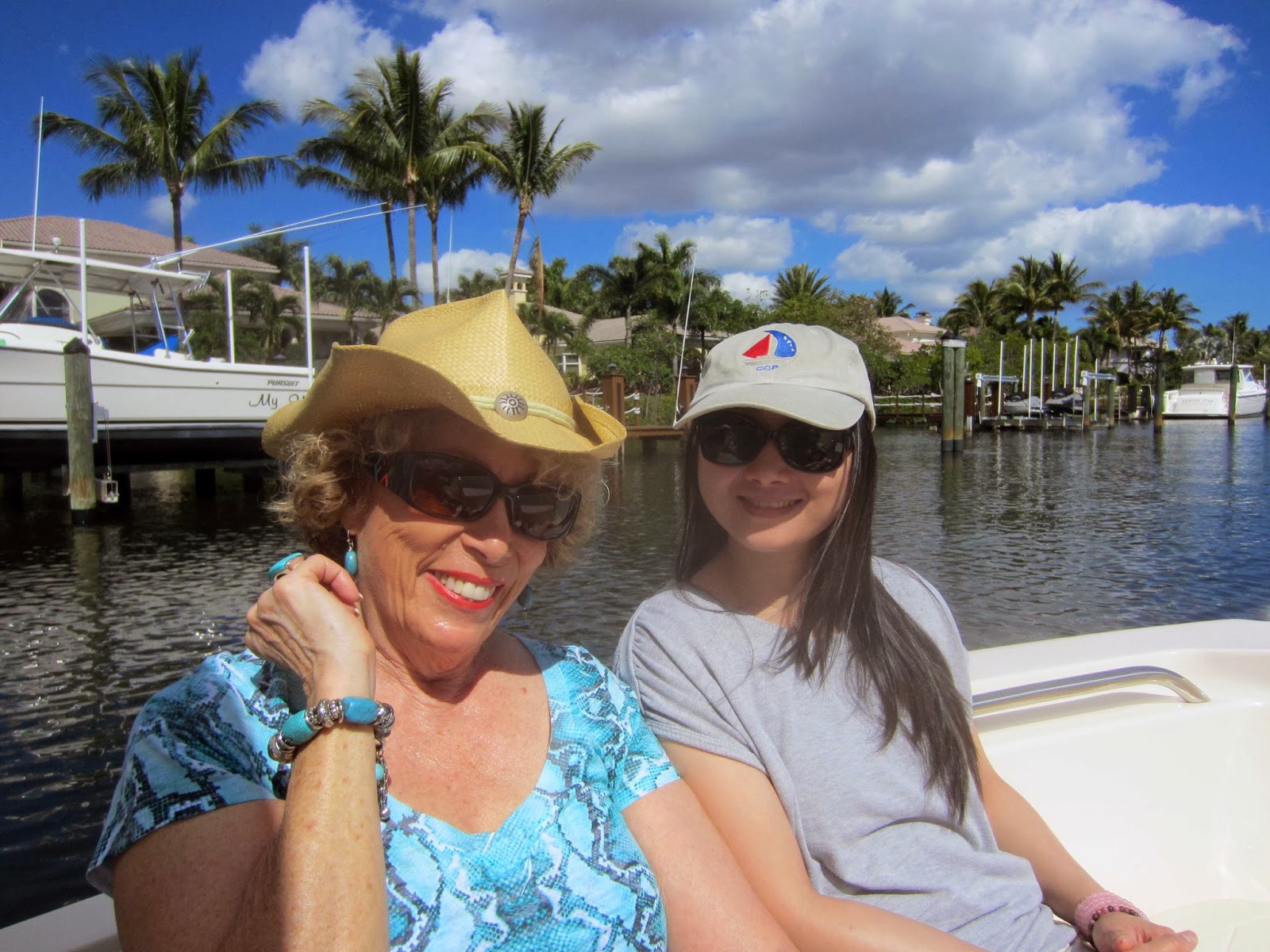 But that seems like another lifetime ago.  Now, instead, friends and family come here to visit.  No wonder.  And when they do, our boat and the waters of Lake Worth and Peanut Island at the Palm Beach inlet are inviting.  A couple of days ago Jon and Anna were visiting.  Here's a photo of Ann (wearing my cowboy hat) and Anna as we departed for the Tiki Waterfront Sea Grille at The Riviera Beach Marina. While we having lunch there, a fishing boat was tossing unused chum into the water attracting some powerful, predatory fish known as "jacks" and pelicans as well.  I thought this very brief video of a pelican balancing itself on the power cord of the fishing boat, the jacks menacingly swimming beneath, to be worthy of a YouTube posting.  Pelicans are among my favorite birds, funny to look at, but graceful when they glide only inches above the water.  They don't have an easy time coexisting with commercial fisherman (competition) or with recreational fisherman as pelicans sometimes get snagged by their hooks.  But this pelican doesn't look like it has a care in the world.

It was nice to have Jon run the boat as it freed me to film a little of the trip home, running north in the ICW part of Lake Worth with Singer Island and some of Munyon Island on our starboard side.  Having spent most of my life in the northeast gives me a special appreciation of these moments. Here's hoping for some warmer weather for our friends and family back where we used to call home! 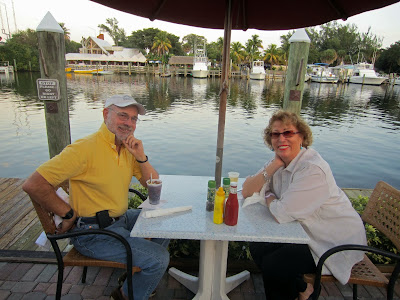 Normally this is a pretty busy time for us, sons Jon and/or Chris visiting, but not this year, they having other commitments.  So recently Ann and I took our boat up the Intracoastal, first to the Waterway Cafe where we tied up for dinner as the sun was setting and, then, after dark, further up the Intracoastal to view the Christmas lights such as the "modest" display below. 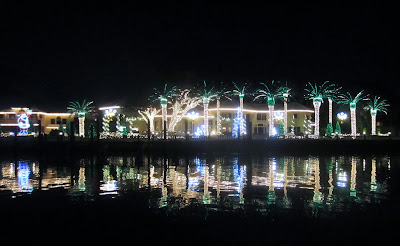 Earlier in the month we went to a party to view the Palm Beach Boat parade, this very brief video showing those Florida Christmas festivities.

Or how about an Osprey sitting high up a nearby tree positioned like an angel on a Christmas tree? 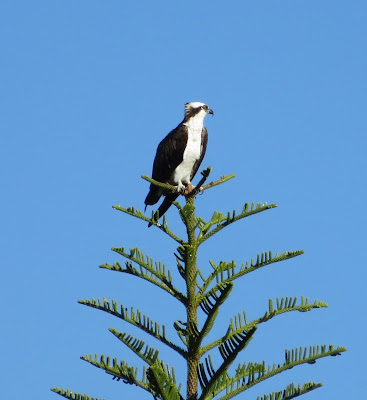 Amazing, this is our 14th Christmas in Florida -- our first one pictured here.  Seems like yesterday. 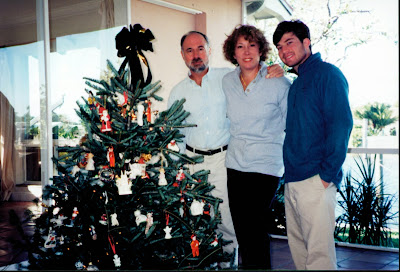 As much as Christmases here have their own kind of high spirits, those we've left behind in Connecticut were special.  We were younger, our sons were growing, eagerly anticipating Christmas morning.  Those holidays were particularly unforgettable when it snowed, and we had the wood burning stove going, the crackling of the wood filling our family room with the definitive word that winter had arrived.  Shoveling the snow and walking the road when it was a winter wonderland are moments of the past which spring to mind, even while it is 80 degrees here. 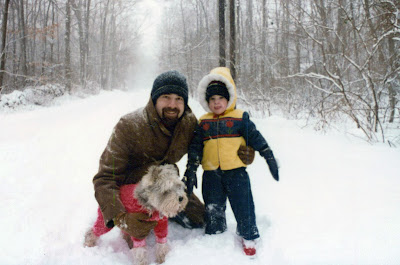 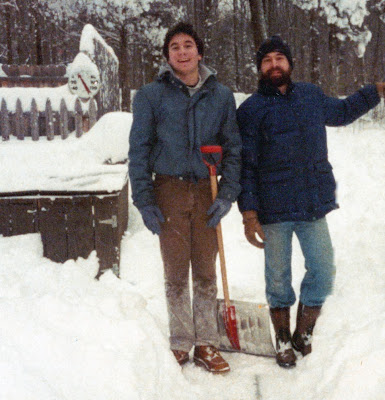 One of my favorite Christmas songs is I'll Be Home for Christmas which was first released as a V-disk for our servicemen during WW II.  Here is my brief rendition in memory of my Dad who was serving when this was released, and those special years in Connecticut.

And to all, a Happy and Healthy Holiday! 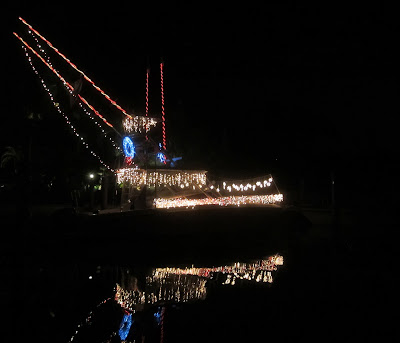