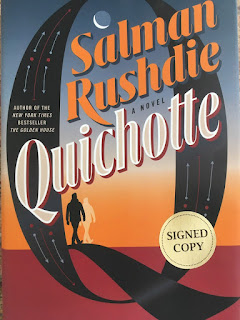 While we were at the Malaprop's Bookstore/Café in Asheville I spied a signed edition of Salman Rushdie’s recently published novel, Quichotte (pronounced “key-shot”).  I vaguely remembered reviews that recommended the work.  I looked it over and the jacket copy hooked me:  “Just as Cervantes wrote Don Quixote to satirize the culture of his time, Rushdie takes the reader on a wild ride through a country on the verge of moral and spiritual collapse.”  Having never read Rushdie, I snapped up that next to last copy, although reading a signed edition has its downsides:  no marginal note taking allowed, no turned down corners of pages to mark important passages.  Plus, I knew I wouldn’t get to it for a while.

“A while” stretched well into the fall and, finally, I began it, clearly a modern day take off on Don Quixote (from which our main character derives his name), but the character Quichotte is a creation of another character, a crime fiction writer, “Brother” with a pen name of Sam Duchamp.  If you are looking for a logically organized, cohesive novel, this is not the one, but if you value a writer’s ability to capture the soul of society in a “moment” in time, then you simply must admire Rushdie’s work.

There are so many characters contributing to the overall sense of a world gone terrifyingly out of control, a sprawling novel in its allusions and conceits, a brilliant work of postmodern fiction, with metafictitious elements so you are constantly caught off guard.  There are stories within stories oftentimes with the identity of the author unclear.  There are pastiches of popular culture the sum of which point the way to the vapid disintegration of values and truth, making it a hallmark work of dystopian literature.

Perhaps it is Rushdie’s age.  He, as with Quichotte (and Brother), as well as myself, are only too aware that time is running out.  Is there enough left to put our personal lives in “order” while the societies we inhabit (in this novel, America, England, and India) are teetering on the precipice of chaos?  There are constant veiled allusions to absurdists such as Ionesco and Beckett.  The elderly Quichotte has by pure will conjured up a son, “Sancho” to accompany him on his “quest” to find his true love, Salma R., a reality TV star (magical realism and phantasmagoria abound throughout the entire novel).  “Father and son” had been sleeping under the stars but they’ve had a quarrel.  Quichotte has gone back to sleep, but Sancho, half ghost at this point, half real person, has climbed to the roof of their Chevy, listening to the crickets and looking up at the humbling wheel of the galaxy.  There was a sign if you wanted one, he thought, a gigantic starlight finger flipping the bird at the Earth, pointing out that all human aspiration was meaningless and all human achievement absurd when measured against the everything of everything.  Up there was the immensity of the immensity, the endless distance of the distance, the impossible scale, the thunderous silence of all that light, the million million million blazing suns out there where nobody could hear you scream.  And down here the human race, dirty ants crawling across a small rock circling a minor star in the outlying provinces of a lesser galaxy in the inconsequential boondocks of the universe, narcissistic ants mad with egotism, insisting in the fact of the fiery night-sky evidence to the contrary that their puny anthills stood at the heart of it all.  (Do I hear the echo of Samuel Beckett’s Happy Days? )

As a picaresque novel it savagely satires the entire America of now, a society gone wild with the self indulgent consumption of popular culture, conspiracy theories, xenophobia, opioid addition, and political polarization.  Rushdie skillfully moves his characters from one story to another, sometimes intersecting, part of his metafictional technique, with such alacrity that the novel is best read not in little sips before bedtime as I did, but in a few large gulps.  Still, you’ll wonder about it all.  It is not easy to follow, but it is compelling to follow.  I found that I had to read the prior few pages before I picked it up again.

In addition to Quichotte, who used to be a pharmaceutical salesman for his relative, “Dr. Smile,” there is the good doctor’s wife, “Happy” who pushes her husband to become successful which leads to Smile’s highly addictive sub-lingual Fentanyl spray called “InSmile.”  This ultimately connects Quichotte to Salma R., the reality TV star (and InSmile addict) whose mother and grandmother were also TV stars in her place of birth, India, which not coincidently is where Quichotte was born (and, of course, Rushdie as well).

Quichotte has problems with his sister, as does “Brother” in a parallel story and as the novel progresses; these tend to run less side by side but converge.  As I said, it’s an unreal novel, hard to follow, but necessary to read.  Why necessary?

Well, for me, it so eloquently suggests answers to some questions I raised in Waiting for Someone to Explain It; The Rise of Contempt and Decline of Sense.

When I complied that book from my political musings in this blog, its tongue in cheek title expressed the increasing questions that seem to rise as I age and with these times seemingly spinning apart.  I think Rushdie is similarly expressing a feeling of hopelessness for the human race, and in particular, our nation. I realize that this belief is nihilistic and cynical, but in fiction he presents abounding evidence.

Dues ex machina!  In the end Quichotte and Salma R. take an “impossible journey” across an America that has devolved into a dystopian landscape to get to California to find one of Salma R’s TV guests, the Elon Muskian (mad? evil?) scientist “Evel Sent”, who claims he has invented a portal to an alternative Earth.  Seriously, he’s sent a dog though there and brought him back, although, as the dog can’t speak, we really can’t quite be sure (yes, the novel is also very funny at times).  If only Quichotte and Salma R can get to the portal, and they do!  But what happens then?  Not wanting to float a spoiler, I’ll end this paragraph here.

This will probably be my last novel for this year, this decade, but it was such an appropriate one as it will be the last entry as well in a chapter in the book I am now slowly compiling which is the antipole of Waiting for Someone to Explain It.  Our writers and playwrights, although their works are considered “fiction” now tilt the fiction / non-fiction scale the other way.  In this era of “fake” news, what is really fake?  Nowadays, I rely on real news from some of our airway’s best comics, Stephen Colbert, Bill Maher, and John Oliver in particular.  Interviews with elected officials can’t seem to measure up to the bar of truth that our comics transcend.

Quichotte in answering a question posed by his “son” Sancho, sums up the importance of what our novelists contribute to the enigma of our times: “I think it’s legitimate for a work of art made in the present time to say, we are being crippled by the culture we have made, by its most popular elements above all…and by stupidity and ignorance and bigotry.”

And then there is the ultimate absurdist question, does it matter at all?  This is where the process of aging and the very nature of existence converge: What vanishes when everything vanishes: not only everything, but the memory of everything. Not only can everything no longer remember itself, no longer remember how it was when it still was everything, before it became nothing, but there is nobody else to remember either, and so everything not only ceases to exist but becomes a thing that never was; it is as if everything that was, was not, and moreover there is nobody left to tell the story, not the whole grand story of everything, not even the last sad story of how everything became nothing, because there is no storyteller, no hand to write or eye to read, so that the book of how everything became nothing cannot be written, just as we cannot write the stories of our own deaths, which is our tragedy, to be stories whose endings can never be known, not even to ourselves, because we are no longer there to know them.

And, so, the second decade of the 21st century draws to its end.