Our summertime boat is frequently home base for some NYC theatre, this time only two shows but what a change of pace from many of those we’ve seen in summers past.  One would think Moulin Rouge! and Oklahoma! would be “traditional” musicals but they felt as “revolutionary” as Hamilton was when we saw that when it originally opened.  Hearing so much about these two shows, some negativity from a critic we highly respect, we were determined to experience these with a tabula rasa mentality.

We’re glad we did.  Had we approached these with our built in biases, ones that are due to our age and previous theatre experiences, there would be a lot that we could seize upon for criticism.  First and foremost as traditionalists, if we had to see Oklahoma! over and over again, we would choose the movie version with Gordon MacRae and Shirley Jones which comes much closer to the previous stage versions we’ve seen.  And as far as Moulin Rouge! is concerned, the pastiche of seventy or so songs is not of our generation for the most part, except for “Diamonds are Girl’s Best Friend” and “Nature Boy.”  The songs of younger generations predominate, but the swatches of them are seamlessly woven into the production, picking out the right lyrics and musical riff for the moment, so that they move the production right along. 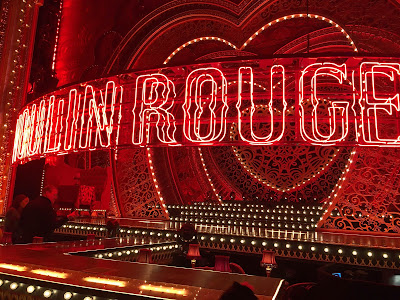 We found ourselves enjoying them in spite of our ingrained aversion to ultra contemporary music.  Our son and daughter-in-law sat in the row in front of us, their heads bobbing along to the music with which they’re totally familiar, which enhanced our enjoyment as well. 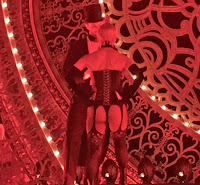 Moulin Rouge! is intended as an over the top extravaganza, another criticism which could be leveled at it from the vantage of the highbrow.  It is that, especially sitting in the third row as we were fortunate enough to be.  It is a love story as anyone familiar with the movie or La Boheme knows, but the dazzling staging and sensuality trump the love story.  Or, one could consider it the strength of this production, one that shares some aspects of Cirque du Soleil, replete with the female lead, Satine, gloriously played by Karen Olivo, descending from the ceiling of the Al Hirschfield Theatre.  It is the type of gimmickry we would normally decry but in the context of this musical, it works, as do the songs and the erotic nature of the presentation, the costumes and the movement on the stage.  Only a great Broadway company could pull this off. 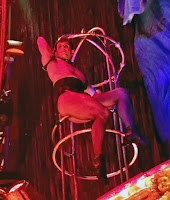 Satine’s love interest, Christian, played by Aaron Tveit, is yet another star in the diamond of a cast as is Tam Mutu playing Christian’s adversary, The Duke of Monroth.  Danny Burstein plays the MC Harold Zidler, reminiscent of the demonic MC of Cabaret.  The ensemble is sexy and vibrant.  The chorography of moving all these players around ramps, and platforms stage left and right is breathtaking.  When we saw Hamilton, now years ago, we knew we were seeing something for the ages.  In its own way Moulin Rouge! will be that memorable.

This brings me to the show we saw the following day, Oklahoma!  Last April we saw Ted Chapin, chief creative officer of the Rodgers & Hammerstein Organization, interviewed at Dramaworks’ “Dramalogue – Talking Theatre!”  Much of the discussion was about the decision making process that went into his giving the green light to this ‘dark-side-of-the-moon’ version of this fabled musical.  Clearly, had there been no Hamilton, perhaps this adaptation would never have been approved.  It is indeed reimagined, taking such an innocent story ( albeit with a sinister side) and turns it topsy-turvey; utterly stripped down to its essentials. 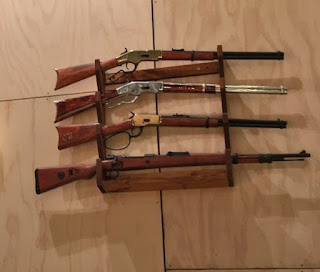 You know the second you enter the Circle in the Square Theatre, Winchester Rifles decorating the walls, a brightly lit stage made up of picnic benches and plywood floors, a small area for an equally small on stage orchestra, multicolored metallic fringe hanging from the ceiling, crock pots lining bench tables on stage left and right at which some audience members are sitting that the goal is to involve the audience members in a very contemporary rendering.  This isn’t why the farmer and the cowmen can’t be friends.  The essence of this production is Laurey having to choose between Curley and Jud Fry.  Yes, having to choose!  In all versions we have ever seen, this choice was made for us right at the burst of “Oh, What a Beautiful Morning.”  It’s Curley, hands down.

While Jud is clearly a loner in those early days when Oklahoma was emerging from a small territory to statehood, today our Jud would be one of the 21st century misfits who ‘merely’ needs understanding to bring him into “society.”  So, in this adaptation Laurey, heavenly played by Rebecca Naomi Jones, is attracted to the brooding quiet Jud.  She actually waivers in her choice!

When we sat down and opened our Playbill, we were disappointed to learn that Curley, the male lead, usually played by Damon Daunno, was to be played by his understudy Denver Milord.  He more than rose to the occasion as not only did he exude that sexy American as apple pie good looks but he could belt out his songs with his guitar, finally winning over Laurey.  But Laurey’s infatuation with Jud is a hurdle for him, constantly perplexing and the end of the play is something unexpected.  It is a road we have seen walked so many times in contemporary society, quick to judgment to exonerate the “good guy,” which, as the last moving refrains of “O-K-L-A-H-O-M-A” ring out, leaves one bewildered. 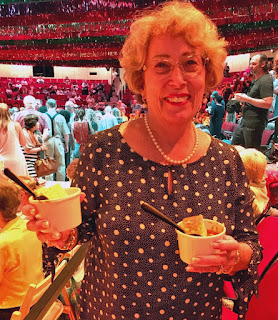 Everything in the production is atypical, including the audience being served some delicious chili and cornbread during the intermission.  The cast is small but the essential story lines are there, Will Parker played with wide-eyed innocence and gullibility by James Davis, declaring his love for Ado Annie, played by the exceptionally talented Ali Stroker with such hilarity and an ethereal voice that one hardly notices she is wheel chair bound, another hat tip to contemporary society.  ‘Ole Aunt Eller played by Mary Testa is the peacekeeper and Will Brill plays the flirtatious Ali Hakim, the peddler who will take what he can from Ado Annie as long as it doesn’t involve marriage.  Jud Fry is quietly, but achingly played by Patrick Vail.  He originated the role of Jud while a student at Bard College.

Most emblematic of the departure of this Oklahoma! from the original is the dream ballet.  The original, choreographed by Agnes DeMille is ethereal.  Now it is one of boldness, parts of it performed in darkness, music dissonant and other parts filmed in real time as cinema verite and projected on the rear wall.  Its vivid content was brilliantly translated by anther understudy in this particular production, Coral Dolphin, whose physicality, including cartwheels, took precedence over ballet.  It is a modern dance of the 21st century.


In fact, that is what we came away with after these two groundbreaking musicals.  These are our times, brutish and violent, frequently unfair, sometimes steeped in narcissism and eroticism, a kind of dystopian landscape captured by the remake of one of our most innocent musicals, and a movie brought to stage.  But bravo to both as art marks the way and records our moment in time.