It is rare to read literature outside of my "comfort zone" of Contemporary American, and rarer still to read novels approaching 1,000 pages, so it was with some trepidation that I picked up Shantaram, recommended to me by my son, Jonathan, but within a few pages I was hooked. Really, a remarkable first novel, given its author, 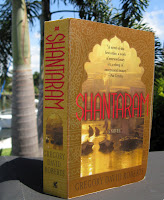 Gregory David Roberts, an Australian, was a convicted bank robber and heroin addict who spent ten years in an Australian prison before escaping and then fleeing to India. The novel is largely autobiographical. As he says in the Acknowledgements, it took him 13 years to write the novel and the first two drafts, "six years' work and six hundred pages were destroyed in prison."

He has a unique perspective on India, in particular Bombay which was to become Mumbai, but most people in India still call it Bombay, one of the most populous urban regions in the world. Dickens' London was such a city in the 19th century and in many ways Roberts' focus on the underbelly of the city reminds me of Dickens' concern with poverty, crime and imprisonment, and slum life. In fact, that is where real life can be found, in Oliver Twist, Bleak House and in Shantaram. They are also similar because of the multiplicity of characters. If you read Shantaram, develop a character list.

During many of my publishing years I worked through an agent for sales in India. Our business was not substantial enough to go there, but each year I met with our agent, Vinod, at the Frankfurt Bookfair, and we developed a good relationship. He was a tough negotiator, but he had a winning smile and in spite of other publishers' complaints about getting paid for sales to India, we shipped on open account and Vinod's word was always good. In reading this novel, Vinod kept coming to mind. Like Vinod, the first Indian, Prabaker, to befriend the novel's main character was a man with a winning smile. As another character in the novel says: "This is India, man. This is India. This is the land of the heart. This is where the heart is king, man. The fuckin' heart!

And at the heart of this novel, is India and its power of redemption for our main character, Lindsay Ford, who escapes from an Australian prison and stops in Bombay on his way to another destination. But Bombay becomes his home and he plunges into the nadir of society, becoming a resident in its slums through his friendship with Prabaker. It is Prabaker's mother, Rukhmabai Kharre, who gives him the name, Shantaram: "Man of Peace, or man of God's peace" "I don't know if they found that name in the heart of the man they believed me to be, or if they planted it there, like a wishing tree, to bloom and grow. Whatever the case, whether they discovered that peace or created it, the truth is that the man I was born in those moments, as I stood near the flood sticks with my face lifted to the chrismal rain. Shantaram. The better man that, slowly, and much too late I began to be." But for much of the novel Shantaram is an ironic name as "Lin" or "Linbaba" as Prabaker names him, descends into familiar ways of violence and crime as the novel unfolds.

But there is a difference between his crimes in Australia and those in Bombay. He becomes a member of a mafia "family" and indeed, friendship, loyalty, and search for a spiritual father are also prevailing themes in the novel. There is honor among these thieves. As Abdel Khader Khan, his mafia boss and surrogate father says: "We concentrate our laws, investigations, prosecutions, and punishments on how much crime is in the sin, rather than how much sin is in the crime....It is for this reason that I will not sell children, or women, or pornography, or drugs....In all of these things, the sin in the crime is so great that a man must give up his soul for the profit he makes."

He adopts a "brother," Abdullah. "I learned that only one man in hundreds will stand with you, to the end, in friendship's name...Prison also taught me how to recognise those rare men when I met them. I knew that Abdullah was such a man. In my hunted exile, biting back the fear, ready to fight and die every haunted day, the strength and wildness and will that I found in him were more, and better than all the truth and goodness in the world."

And the novel is about love, unrequited and requited, particularly his undying love for Karla, a Swiss-American woman who lives in the shadows. "One of the reasons why we crave love, and seek it so desperately, is that love is the only cure for loneliness, and shame, and sorrow. But some feelings sink so deep into the heart that only loneliness can help you find them again. Some truths about yourself are so painful that only shame can help you live with them. And some things are just so sad that only your soul can do the crying for you."

Also central to this novel is the exile in society and literature. "When I'd climbed the wall of the prison all those years before, it was as if I'd climbed a wall on the rim of the world. When I slid down to freedom I lost the whole world that I knew, and all the love it held. In Bombay I'd tried, without realizing it, to make a new world of loving that could resemble the lost one, and even replace it."

And in that "new world" he meets others like himself and those became his family. "They were all, we were all, strangers to the city. None of us was born there. All of us were refugees, survivors, pitched up on the shores of the island city. If there was a bond between us, it was the bond exiles, the kinship of the lost, the lonely, and the dispossessed."

There is a dancing bear in the novel, Kano, which Abdullah arranges to hug Linbaba and some 800 pages later Linbaba finds himself helping the bear to leave the same prison in Bombay where he also has spent some tortuous time. Then he helps the giant bear to escape the city disguised as a Genesha, on a trolley, at the end of a an annual festival. "The elephant-headed god was known as the Lord of Obstacles and the Great Solver of Problems. People in trouble appealed to him with prayers....He was also the divine ministrant of writers." Throughout the novel people turn to Linbaba. He served as ministrant to all, from learning to treat illness in the slums to helping friends, to serving his mafia family. Redemption and loyalty. That is the essence of the novel.

As a literary work, it labors at times and I thought it really was two novels, the main one in Bombay and the one in Afghanistan. Apparently, there is a sequel in the works which takes Linbaba to Sri Lanka. Also, not surprisingly, the movie rights to this epic novel were sold because of Johnny Depp's interest in the book and in starring in the movie. Ideal casting methinks, but the novel is sprawling and wrestling it into a manageable screenplay and Depp's schedule has delayed filming. One hopes it will see the light of day, even if the movie has to be truncated to include only the Bombay experience. By the way, part of the novel covers the Bollywood scene, as it does nearly everything else!
Posted by Bob at 9:07 AM