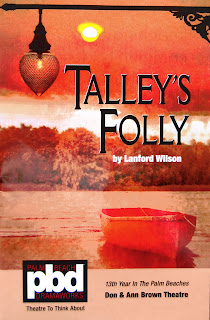 Before last night's preview performance we attended Dramaworks' traditional "Knowledge and Nibbles" session, lunch followed with an opportunity to hear from the actors and the director and to have an exchange with them concerning the performance.  In attendance, too, was the set designer, Michael Amico, as in a sense, the set itself is the 3rd "character" in the play, always being referred to in the script, as a place in time, a place in family history, and a symbol of the emotional disarray of the play's two unlikely lovers.

The Victorian boat house in which the action takes place, the folly of the play's title, where Sally Talley first met Matt Friedman a year earlier, has been worn down by time, neglected, almost an outcast like the characters themselves. Here Dramaworks take full advantage of its new expansive stage, and the experienced Michael Amico, with the help of a book which had actual plans for building a boathouse in 1870, strives to capture Lanford Wilson's intent. Wilson's description states said that the boat house set should not look "bombed out" but, instead, should look "run down."  Bombed out would imply little hope, but hope gathers momentum as the play progresses.  And so as we first see it, the boat house has an almost ghoulish presence but becomes an enchanted place as the play unfolds.

It is July 4th in 1944, at Sally's home near Lebanon, Missouri (incidentally, where the playwright was born) and the play begins with an extraordinary monologue, Matt breaking the fourth wall, directly addressing the audience, in fact, in this production, even strolling in the first row before the stage, humorously and engagingly setting the time, place, and circumstances of the play.  He says the play "is a waltz - a no-holds-barred romantic story that could be done here with a couple of folding chairs, which, hopefully, will end in love, and that it will be performed without an intermission."  When Sally, the object of Matt's love, enters the dialog abruptly shifts in a 90 minute plus performance, Matt now in full character.  It is an interesting dramatic device, demanding your attention, and I thought one that endears the audience to Matt's quest.

This is a prequel to Wilson's first play in the Talley series of three, Fifth of July, which takes place in 1977.  In this, really the first play chronologically, Wilson establishes how Sally and Matt meet only a month after D Day, the implications of the war hanging heavily.

They first had a romance a year before, in this same boat house which has been in Sally's family since her "Uncle Whistler" built it.  Everett Talley (known as the "whistler" as he always whistled; everyone in the town thinking him crazy) wanted to build a gazebo, but it became  more of a boat house. It has always been Sally's favorite place and she thinks of her Uncle as one of the healthiest family members in spite of his eccentricities.

Her family is one of the two wealthiest families in town.  They are also Protestant and along with that distinction comes some southern bigotry and Matt being a Jewish immigrant and much older, is rendered unwelcome by them. (While Sally says she’s a mid-westerner, Matt contends that "anyplace outside of New York City and some suburbs of Boston, is the south!") Her family even threatens to shoot him, calling Matt the ‘‘communist traitor infidel’’

Thus the clandestine meeting of Sally and Matt on this July night in the boat house. Even though she at first rejects Matt's advances, in fact telling him to go back to St. Louis, her very presence, and in a new dress no less, sort of belies her protestations.  (Matt, by the way, is wearing a new tie instead of the same one he has worn for years in his office.)  Matt has sent Sally letters for the past year, all unanswered (she complains that they were mostly details about his work as an accountant).

So during that night they exchange stories about their past.  In spite of being from a well-established family, Sally feels she is an outsider, carrying a secret with her which she finally reveals to Matt (no spoiler here, see the play!).  Once she unburdens herself of that, the walls of Matt's unrequited love are torn down.

Sally questions Matt about his origins and Matt too has his tale to tell, piecing together his Eastern European / German heritage, and revealing a tragic family history of escaping persecution and the pain of his family being killed by the Nazis.

It is a beautiful play of how two emotionally wounded people, ones who feel out of step with the times and society, find a path to happiness. "You and me are so alike, although we are so different" Sally finally says. (And a political awakening has already stirred in Sally, her being fired for teaching Thorstein Veblen's Theory of the Leisure Class, in nursery school!)

So much of the play depends on the staging and the acting. As a "two handed" play, only two people to keep the action moving forward, it is such a delicate balance that at any time one fears their relationship might spin out of control and end badly.  And in this respect, Director J. Barry Lewis perfectly choreographs the actors on the multi-tiered stage in harmony with the overall feeling of the play as a waltz, the dialogue shifting back and forth between confrontation and tenderness in 3/4 time!  He also finds the right symmetry between the play's humorous and soulful moments.

But when it comes right down to it, the acting makes or breaks Talley's Folly and here Dramaworks' casting excels.  My wife, Ann, saw Judd Hirsch's performance as Matt in the 1980 award-winning Broadway production, but thought Brian Wallace's performance last night was every bit as credible.  Brian has to carry some heavy lifting particularly with the opening monologue, and even though this was a preview performance, the first time the actors have played the role in front of a live audience, Mr. Wallace, making his first Dramaworks appearance (although an experienced actor in NY and in repertory productions), carried the role as if he's been performing it for months.  He had the audience rooting for him right from the beginning and his ease in handling the diverse emotions of humor, anger, and disappointment, while practically pleading for Sally's hand, were moving.

Erin Joy Schmidt who plays Sally has appeared in two other productions we've seen, Goldie, Max and Milk at the Florida Stage and Dinner With Friends at Dramaworks.  She can turn an emotion on a dime, her eyes often welling up with tears while Matt is speaking and even though she might be on another part of the stage, the audience knew precisely when to follow her reaction.  How does one play the part of a spinster, one who by her own admission regarding her family "are as anxious to get rid of me as I am to leave," but finds her opportunity to be a Jewish accountant of foreign ancestry, and an older man of whom her family disapproves?  She's afraid of intimacy and commitment on the one hand and abandonment on the other, and Ms. Schmidt's performance covers the whole range.

Mr. Wallace and Ms. Schmidt are the perfect duo playing the roles of Matt and Sally, interacting with each other with ease.

A special note about the lighting, designed by Ron Burns as at one point Matt remarks that there is "no color in the moonlight."  It drew my attention to the dappled lighting as if streaking through the trees across the actor's faces, just the perfect ambiance for the play and the setting. Costume design is by Brian O’Keefe, with unerring detail right down to Sally's seamed stockings.  (Ann remarked how stunningly coifed Erin was for the part, revealing earlier in the day that it took her over an hour and half to perfect the period hairstyle!)

Perhaps some changes will be made between the preview and the opening tomorrow, but to me, the play seems ready for prime time and a fitting production for the first of Dramaworks' new season. 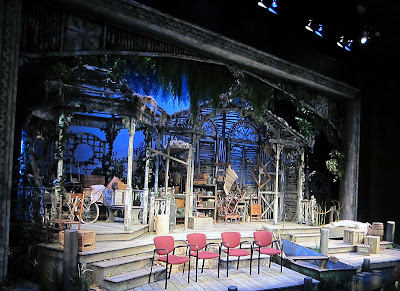