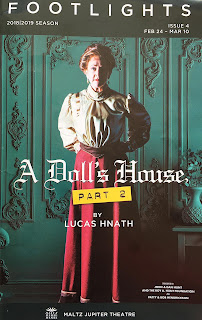 Knock. Knock.  No answer.  Bang. Bang!  Hello, is anybody there?

The family you left behind 15 years ago, Nora, slamming the door heard around the world.  They have it in for you.  And you in turn have to deal with some of the same issues, being an independent woman living in a man’s world and now new ones of your own making.  You didn’t think you could come back to ask for a favor without consequences, did you?

Nominated for eight Tony Awards, Lucas Hnath’s A Doll’s House, Part II is the most produced play throughout the country this season.  Maltz Theatre’s production is a welcome addition to the bandwagon, and for South Florida Theatre goers in particular.

The play’s Director J. Barry Lewis commented, “While A Doll’s House was written nearly 140 years ago, it has a contemporary flair that speaks to today’s audiences. It is at its heart a very modern story that deals with selfishness, selflessness, growth and compromise. A Doll’s House, Part II is not a sequel to the original work, but more of a thought experiment of ‘what if.’ It presents a very sophisticated argument about what we owe to ourselves and to each other.”

J. Barry Lewis has taken this highly-charged intellectual tour de force and framed it in period dress but with a contemporary off kilter set.  The stage itself reflects that theme, the soaring white stucco walls, the minimalism of furniture, the stage floor sloping downwards into the audience’s lap and scene changes electrified by cringing amplification and visual identification.  The audience has entered Nora’s nightmare world.

Carol Halstead as Nora returns “home” on a self-serving mission.  She boasts to her former maid/confidant, Anne Marie, about becoming a highly successful author, with all the connections and money anyone could desire.  Nora writes books about women, their bondage in and the superfluous nature of marriage.

Halstead stalks about the stage, highly satisfied with herself as Nora, while explaining (or bragging about) the last 15 years to the maid who not only raised her as a child, but has raised Nora’s three children as well.

Anne Marie is hilariously played by Mary Stout, who welcomes Nora on the one hand, but has her own reservoir of anger for everything she’s sacrificed for Nora and Torvald (including giving up her own child to keep that job), and Stout begins to wear that on her sleeve.  It is she who explosively uses the F word, quite a few times in fact, indicating that although this sequel is supposedly taking place in late 19th century Norway, the dialogue is strictly contemporary.  It is in perfect harmony with the surrealistic staging and the plays’ theme.

Nora has returned to her marital home for a simple request: to ask Torvald to properly file their divorce papers.  She had naturally assumed that had been done when she left as she went about her life as a single woman, signing contracts, having lovers (which Nora proudly enumerates), until one of her anti-marriage books led to a Judge’s wife leaving him. Once the Judge discovered her true identity, that in essence she was still a married woman and as such could be incarcerated for signing contracts, not to mention having affairs, he made demands that she refute her work or be exposed.  In essence, blackmail.  Thus, Nora has to become once more a supplicant to her husband.

Not so simple Anne Marie explains, “A lot of people thought you were dead.”  In effect, it’s awfully hard to get a divorce from a dead person and for Torvald to do that would expose him to the fact that the assumption which he never publicly denied, could even threaten his high level banking position.

Indeed, a complication. What would a drama be without one or in this case several which keeps the audience guessing?

Suddenly Torvald unexpectedly returns home for some papers.  Nora wasn’t prepared to make the request at that very moment, but after his stunned realization that the person standing before him is really Nora, he forces her to explain why she’s returned.  Torvald is played by Paul Carlin, with the confidence befitting his position as a highly respected member of society, as well as the very perplexed disheartened husband of a wife who inexplicably walked out on him 15 years ago, and with no explanation, no discussion.  Now she has some ‘splainin’ to do.

So the fencing match begins.  He refuses to grant her request for the reason Anne Marie has explained.

What is Nora to do?  The thought of agreeing to the Judge’s demands is an anathema to her.  In another tete-a-tete with Anne Marie, who is scheming for her own benefit, perhaps to retire or at least not lose her job, she suggests that Nora approach her daughter, Emmy, to intercede on her behalf in asking her father to grant the divorce.  Apparently Emmy has clout with Torvald.

No, Nora, says, I didn’t come to meet or involve Emmy but then her seemingly lack of alternatives make her relent.

Suddenly, there is a one-on-one scene with Emmy who we soon learn is a chip off the old block.  She could be Nora in her youth.  She’s in love and wants to marry! -- a young man from Torvald’s bank.  Emmy is deliciously played by Mikayla Bartholomew, who radiates that confident bloom of youth with the smarts of the mother she never really knew.  She is standoffish but civil, genuinely trying to help her mother as she has her OWN agenda.  This is yet another ingredient in the bubbling broth.  She knows that if Torvald is taken down at the bank, her impending marriage might be in jeopardy.

First, though, mother and daughter have to debate the merits of marriage (or demerits according to Nora).  Nora is confident that marriage is not only not needed in society but that in 20 or 30 years from now (the late 19th century being the “now”) all these issues of marriage and women’s inequality will have been settled.  Sure, Nora.  Emmy on the other hand, to her mother’s horror, “wants to be possessed.”

So, there you have it, another stalemate, although Emmy gives Nora yet a third alternative.  Forge the death records at city hall (Emmy conveniently knows someone there, one of the many stretches of plot Lucas Hnath uses to move the story and the complications forward).  After you are “dead” disappear for a while as you did 15 years ago, going to your own fortress of solitude.  Nora had confessed that when she first left she lived alone “up north” until the “voices in her head” dissipated.

Eureka!  Saved by the bell, Torvald stumbles home, bloodied, holding a piece of paper which he reveals is the divorce.  He’s a good guy after all!  Why he is bloodied and the choice Nora now has to make I’ll leave for when you see this audacious play.  The author has us all guessing until the very end.

Suffice it to say, this production has it all, comedy, suspense, empathy, and some of the finest acting you’ll see this season.  In fact, what may make this play especially distinctive, besides the pedigree it attempts to follow, is how all four characters come across as likeable.  There is no one who you can call a hero or a villain.  They are all believable and engaging.

Of course the acting accolades have to go to Carol Halstead as Nora.  She’s on stage full time in this intermission-less fast paced production and Halstead IS the Nora we have imagined, beautiful and brash.  Mary Stout as the maid, Anne Marie, is the perfect comic foil, mesmerizing to watch on stage. Paul Carlin as Torvald personifies the man we’d expect for this part, knowing the hurt he harbors, while Carlin mightily tries to keep his dignity. His anguish in learning that one of Nora’s novels is about their very own marriage and how he doesn’t come out too well is affecting (although laughingly Nora had to “kill off” the heroine to make it acceptable – a bit of foreshadowing for one of her own alternatives).  Mikayla Bartholomew is self-assured as Emmy, passionate in her own beliefs, but always under careful control of her emotions, the perfect foil for the very arguments that Nora has lived and written, not hesitating to say to Nora “I’m better at life because you were gone.” Ouch.

J. Barry Lewis directs this parlor drama for the comedy and the messaging.  He moves his characters into interesting positions among the sparsely decorated stage to bring out both their character and the “debate.”  The play moves steadily, like the second hand of a clock, striking a strident note as scenes change, the characters we’re about to see in that scene briefly stenciled in lights on the back wall across the door.  And when I say “strident” I mean electrifying, like the dialogue.  Yet Lewis knows when his characters must pause to give the audience time to take in a look or a pained response of a character.

His technical crew, particularly lighting designer Kirk Bookman and sound designer Marty Mets play a significant role in those scene changes.  Scenic designer Anne Mundell has created the perfect space and feeling for this contemporary play based in the 19th century.  Costume designer Tracy Dorman and wig designer Gerard Kelly provide that touch of verisimilitude against the backdrop of the surrealistic set

A Doll’s House Part II is a must see at the Maltz Theatre.  It is also a reminder why live theatre is so, so, much better than the ubiquitous streamed entertainment to which we are now subjected.  This play and production is intellectually engrossing and comedic as well. 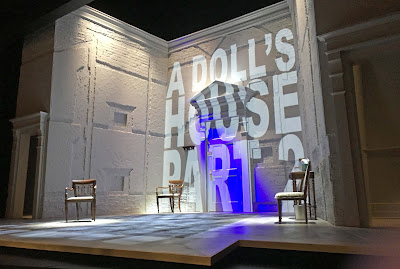