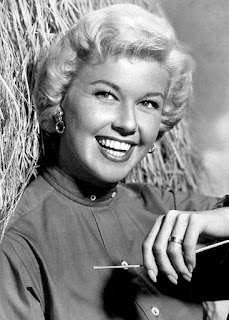 Doris Day is dead.  Ann and I have been dreading this moment and no sense repeating all the accolades that will be posted and written, all deserved.

But to me, a piece of me has died. The only way I can put it is I loved her public persona.  I felt the same way when John Updike passed away, one who occupied my reading life and made sense of the changes in America, decade by decade. Can it be he has been gone ten years now?

Doris Day occupied my idealized fantasies of the girl next door during the same period, fresh, wholesome, shorn of pretense.  This is something that cannot be faked.  She was radiant, buoyant, and whenever I needed a pick me up, all I needed was to watch, yet again, one of her films as her inherent goodness was infectious.

Her talent was peerless.  I don’t think anyone in film could match her for her ability to act, sing, and dance, especially in the comic realm.  She was the whole package, and projected a special kind of lovable personality.

One theatre/film critic, who will remain nameless, has criticized her as being merely an average singer.  Perhaps her voice was not exceptional.  Nor was Sinatra’s.  But there was that something else that made their singing extraordinary.  Sinatra’s phrasing and ability to capture his audience as if he was singing to you might be the best way to describe his gift.  Doris’ was to project her golden personality in song.  Just listening to one of her recordings, I see her radiant smile in my mind.

We’ve usually heard her with big bands but she would have made it as a cabaret singer if movie land did not appropriate her for their own in some 40 films.  One of those was a biopic where she played cabaret singer, Ruth Etting, with Jimmy Cagney, demonstrating both her acting ability and cabaret style in “Love Me or Leave Me” (1955).  Or one can hear her with pianist André Previn on the 1962 album “Duet” and appreciate her gift for singing without the silver screen prop, that sparkling personality still shining through.

In a world sorely in need of rectitude and hope another “companion” of ours has passed, but at least we have her films and recordings to remind us of what can be.  RIP Doris Day.