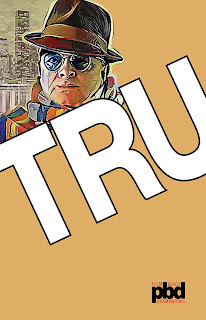 While he dishes the dirt with the audience, ‘Tru’ as Truman Capote was nicknamed as a youth, is inherently alone on stage.  Alone.  That’s the essential message from Jay Presson Allen's play, which takes place during one holiday season (circa 1975), a time when his expectation of joy is displaced by a sense of estrangement from many of his closest friends.  The play examines the place of the artist in society, drawn from the very words and works of Truman Capote.  Dramaworks’ lapidary craftsmanship and Ron Donohoe’s bravura performance make this a compelling production.

Capote is a flamboyant and proud homosexual, a person of acerbic wit with that lisp and unmistakable southern drawl, and that is part of the charm of this play.  But Tru is also an author’s author, as a sensitive boy drawn to writing, later launching a career predominately as a writer of short stories.  However, his two best remembered works are his novella of a writer coming of age in Breakfast at Tiffany’s (unlike the focus of the movie), and In Cold Blood, where he skillfully demonstrated his striking ability as a non-fiction journalist, written with the eye of a novelist.

Rob Donohoe’s outstanding performance as an openly gay man is not an impersonation but a tribute.  Donohoe is a Dramaworks veteran, having played a wide range of parts.  Before Dramaworks’ Producing Artistic Director Bill Hayes finalized arrangements for producing Tru this season, he wanted a commitment from Donohoe to play the part.  That was a year ago and Donohoe has since immersed himself in Capote’s work and life story, going to a voice coach to capture the high, nasal, southern accent of Capote and then modulating it for the stage. 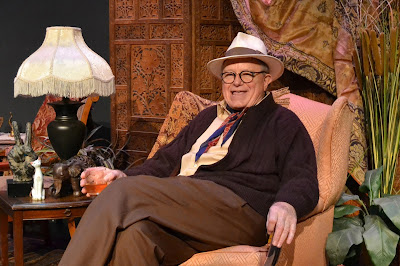 Capote’s angst becomes palpable as we first see him unraveling the day before Christmas Eve.  Thanks to a recent publication in Esquire of a part of his unfinished novel Answered Prayers, in which he unflinchingly reveals unflattering portraits of his “friends”, the super wealthy, idle rich, he has now been summarily abandoned by them, and most depressingly by his high society women friends with whom he shares a gossipy codependence.  This is a very harsh blow.  But here Tru responds to his critics, ”Answered Prayers is the book I’ve been in training for my whole life…...I’ve written a lot of books, but basically I’ve always had this one book to justify..…everything.  What’s it about?  Answered Prayers is about them.  The Super Rich.  As seen through the eyes of an outsider who for various reasons has privileged access.  Hehehe.  It’s about sexual license and ethical squalor.”

The artist’s relationship to the wealthy is frequently a symbiotic one, the artist needing financial support while the uber rich need something to fill their relatively empty lives.  Tru feels this deeply, saying, “Money, money, money!  They’re very nervous with you if you think you don’t have any.  That’s why they hang together so desperately.  It’s not that they like each other…they don’t.  A yacht and five houses are what they have in common.  And they get very bored with each other.  So when they can, they try to take in amusing artists.”

So it is with some bewilderment that Tru is facing the holidays, wondering what in the world did they think he was doing with them, other than entertaining them; after all he is a writer and to him Answered Prayers is the culmination of his life’s work.  And as we learn, he has known EVEYONE in society.  If they’ve ever been to Studio 54 they were under his scrutiny.  He proudly states:  “I am an artist.  Artists belong to no class.  And people like that who cozy up to artists do so at their own risk.” Nonetheless, this work becomes a path to self destruction, lubricated by alcohol and pills. 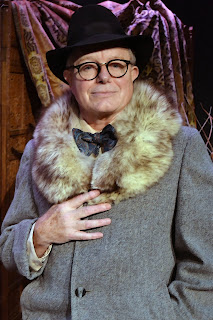 Conflicting Christmas emotions set the tone for the entire production.  On the one hand he has fond Christmas memories, particularly of “Sook” who was his mother’s oldest sister, a person some people considered retarded, and thus people thought her “funny.” “Sookie and I were like forgotten people.  Sook by her brothers and sisters and me by my parents.”  These two misfits were close, particularly around the holidays, when they made fruit cakes together.  His book Christmas Memory provides some of the narrative about their distinctive relationship.  Nonetheless, Capote confesses -- and this is the essential sadness of this “Christmas play” -- “I’m very ambivalent about Christmas.  I want it to be magic – warm and lavish with all your friends like a family.  Which sets up terrible anxiety because I don’t have a very good history with Christmases.  And that’s true with alcoholics, you know.”

Yet, in spite of the bravado, the cutting wit, and drunken cynicism, there is vulnerability about Rob Donohoe’s performance, one we all have about our lives, whether we are “liked,” and essentially the meaning of our existence, and the choices we have made, which brings Capote to this moment in time.  For much of Capote’s life he was a pop culture figure, ”famous for being famous,” but Rob Donohoe delves into that other place where the artist and the true human being reside.  Although there is a sense of sadness and resignation it is not all gloom and doom as the play provides for plenty of laughs, such as when Tru receives “a veritable horse trough of unspeakable poinsettias..…[which] are the Bob Goulet of Botany.”

One person plays are not everyone’s cup of tea, yet in many ways they are harder to produce than conventional plays and therefore more challenging to the small team of actor, director, and technical staff.  Tru is skillfully directed by Lynnette Barkley, her third directorial stint at Dramaworks, and working closely with Paul Black, the scenic and lighting designer, they created other “characters” using the set --the bar, the Christmas tree, and the piano, points which relate to Capote’s life and help create movement and modulate the mood as Tru moves from his highs to lows.

The set is gloriously breathtaking, capturing a sense of Capote’s UN Plaza apartment, with its books, framed black and white photos on the wall of Capote and friends, ubiquitous parquet floors and view of NYC.  You are a visitor in Capote’s home and get to know the man and all the different layers of his life through his interaction with his environment.  This is the magic of a one person play: you are in a one to one relationship with the character.  This person is talking to you, even breaking the fourth wall at times, which can’t help but create a special sense of intimacy.

Costume design is by Brian O'Keefe, and although only one person is on stage, he needed clothes that would enable him to perform the part believably, not to mention making him look shorter and heavier than Donohoe is himself.  Sound design by Brad Pawlak captures voice overs from the answering machine, from Tru’s memory, and an interesting musical selection Allen’s play requires, concluding with the haunting lyrics of “Little Drummer Boy”.

Tru is a little gem of a theatre piece.
Posted by Bob at 8:20 AM