When a man is tired of London…

...he is tired of life. Samuel Johnson uttered those famous words to his biographer James Bosewell some two hundred and thirty years ago. I’m still basking in the glow of President Obama’s and First Lady Michelle’s London visit to attend the G-20, replaying in my mind the images of London, our President’s news conference and Michelle’s moving visit to a girls school in Islington, north London.

If I could live in any place other than where we have, I would choose London. I often visited there during my career usually to confer with our distributor, Eurospan, run by my late dear friend, the charismatic Peter Geelan. I would also see numerous UK publishers with whom we traded copublications, or go to the London Bookfair, or stop by London on my way to the Frankfurt Bookfair. 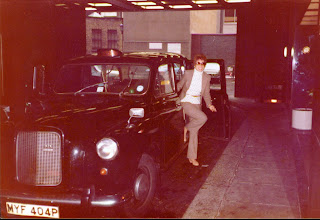 vacation time there as well. After staying at several London hotels, including the Dorchester where we had to nearly pole vault into our bed at night, we sort of settled at The Cavendish, which in the Edwardian era was run by Rosa Lewis, the infamous “Duchess of Duke St.” Located across from Fortnum and Mason on the corner of Duke and Jermyn Streets, it is ideally situated near Trafalgar Square, St. James and Piccadilly Circus, the heart of London’s great theatre district where we went as often as our schedule allowed. So it was at this hotel where I would meet Ann during my business travels, and later, we brought Jonathan as well, the first time as young as 14 months old. Here Ann is stepping out of a London taxi having just arrived for one of those visits.

We were at the Cavendish when a young British policewoman was killed in 1984, shot by someone from the nearby Libyan Embassy on St. James Place. Between the Irish Republican Army threats and other clouds of terrorism, traveling in London was sometimes filled with anxiety, but the British people take such adversity in stride. The Cavendish became an armed camp during the standoff with the Libyan Embassy and right outside our window, which had a view to the Embassy, there were police sharpshooters. We slept on a mattress on the floor that evening, along with 8-year-old Jonathan, all of us anxious to stay out of the line of fire. We were leaving the following morning and that standoff lasted at least a week longer. 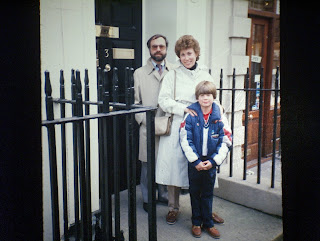 Garden. This area is rich in literary tradition. Number 3 had housed the publishing home of Gerald Duckworth, Virginia Woolf's stepbrother and no doubt Henry James and John Galsworthy had visited as well, as Duckworth published both. Jane Austen’s brother Henry, a banker, lived at 10 Henrietta Street and she had stayed there when in London, saying the house was “all dirt and confusion, but in a very interesting way.”

The scenes from My Fair Lady that were filmed in Covent Garden were right outside the door of 3 Henrietta Street and, according to Peter, a scene from Alfred Hitchcock's 1972 film Frenzy was made in the building itself. As per Wikipedia, “much of the location filming was done in and around Covent Garden and was an homage to the London of Hitchcock's childhood. The son of a Covent Garden merchant, Hitchcock filmed several key scenes showing the area as the working produce market that it was. Aware that the area's days as a market were numbered, Hitchcock wanted to record the area as he remembered it….The buildings seen in the film are now occupied by restaurants and nightclubs, and the laneways where merchants and workers once carried their produce are now occupied by tourists and street performers.” 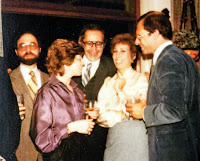 Of course, I remember when Covent Garden was a public square mainly devoted to the fruit and vegetable market, but in its transformation to today’s tourist attraction, its character was mostly retained. Eliza Doolittle might still recognize it while selling flowers from the portico of St Paul's. 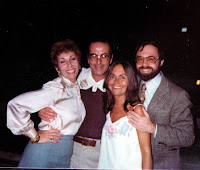 would easily last the entire day, there was always time for fun in the evenings, sometimes a party at the offices itself, or at Peter’s flat, typically ending in a crowd moving on to dinner at a nearby favorite restaurant. And in those days, and since, London has some of the best food in the world if you’re the guest of someone in the know. When I retired, Peter’s son, Michael who took over the business with his partner, Danny, who was in charge of finance, presented me with a montage of photos of those years, which I proudly display on my bookshelf next to my desk. 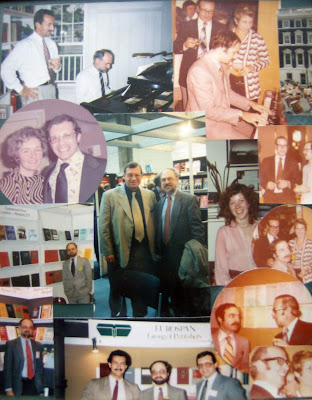 When Jonathan was along, Ann and I made it a point to journey by underground to Pinner in west London to visit Danny and his family. Over the years we became close to them and they visited us in the US as well. When my older son Chris, who was a superb high school soccer player, was invited to play in Europe, he stayed with their family and visited English football clubs with Danny, 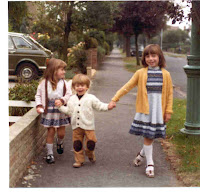 Here we are with Mum (Danny’s mother), his wife, Pat, and their two beautiful daughters, Claire and Lisa. I can still see them all in my mind’s eye, as they were in the photograph here skipping down the streets of Pinner, so reminiscent of the streets of Kew Gardens near where I grew up, obviously modeled after these London environs. One year I hand carried Cabbage Patch dolls for his girls so they would be the first in the UK to have the “prestigious” dolls. When they were introduced in the early 1980’s around Christmas time in the US, there were long lines and even fistfights to get one. Ann was not to be messed with though when she waited on line for them at a

local toy store before we journeyed to London.

So I watched the Obama news coverage with a mix of nostalgia and pride, reminded not only of the special kinship the United States has with the United Kingdom but also of my own close personal ties. It was my fervent hope that as President, because of his political views, his multicultural background, and his leadership abilities, Obama would help repair what, by any objective measure, was diminished respect for the United States abroad.

What better place to start than London town? I had not anticipated what First Lady Michelle would bring to the table. Her speech to the Elizabeth Garrett Anderson School, her genuine, heartfelt emotion, and the outpouring of love to her resonates with reciprocal devotion. And who could not be impressed by the arm in arm embrace with the Queen?

Repairing a tarnished reputation takes time, it takes mutual respect; and if the G-20 accomplished nothing else, it seems to have established the right direction. Perhaps a new sense of confidence begins to percolate the world economy as well because of agreements made at the G-20. So much remains to be seen on that score and I have been pessimistic by the accelerating debt that is being incurred. But as economics relates to trust, in the system, and between nations, this may be a start to break the vicious cycle of gloom and doom.

I was struck by President Obama’s news conference, where he seems so much at ease, affable, and his responses clearly belie the attacks by some of his critics as his being teleprompter dependent (as if his predecessor was not). I conclude with the question that was posed by Jonathan Weisman, the Washington Post Congressional reporter, about America’s standing in the world and our President’s reply. It’s the kind of truth that does inspire the “hope” that became a campaign mantra.

Q: Thank you, Mr. President. During the campaign you often spoke of a diminished power and authority of the United States over the last decade. This is your first time in an international summit like this, and I'm wondering what evidence you saw of what you spoke of during the campaign. And specifically, is the declaration of the end of the Washington consensus evidence of the diminished authority that you feared was out there?

OBAMA: Well, first of all, during the campaign I did not say that some of that loss of authority was inevitable. I said it was traced to very specific decisions that the previous administration had made that I believed had lowered our standing in the world. And that wasn't simply my opinion; that was, it turns out, the opinion of many people around the world.

I would like to think that with my election and the early decisions that we've made, that you're starting to see some restoration of America's standing in the world. And although, as you know, I always mistrust polls, international polls seem to indicate that you're seeing people more hopeful about America's leadership.

Now, we remain the largest economy in the world by a pretty significant margin. We remain the most powerful military on Earth. Our production of culture, our politics, our media still have — I didn't mean to say that with such scorn, guys ... you know I'm teasing — still has enormous influence. And so I do not buy into the notion that America can't lead in the world. I wouldn't be here if I didn't think that we had important things to contribute.

I just think in a world that is as complex as it is, that it is very important for us to be able to forge partnerships as opposed to simply dictating solutions. Just a — just to try to crystallize the example, there's been a lot of comparison here about Bretton Woods. "Oh, well, last time you saw the entire international architecture being remade." Well, if there's just Roosevelt and Churchill sitting in a room with a brandy, that's a — that's an easier negotiation. But that's not the world we live in, and it shouldn't be the world that we live in.

And so that's not a loss for America; it's an appreciation that Europe is now rebuilt and a powerhouse. Japan is rebuilt, is a powerhouse. China, India — these are all countries on the move. And that's good. That means there are millions of people — billions of people — who are working their way out of poverty. And over time, that potentially makes this a much more peaceful world.

And that's the kind of leadership we need to show — one that helps guide that process of orderly integration without taking our eyes off the fact that it's only as good as the benefits of individual families, individual children: Is it giving them more opportunity; is it giving them a better life? If we judge ourselves by those standards, then I think America can continue to show leadership for a very long time.