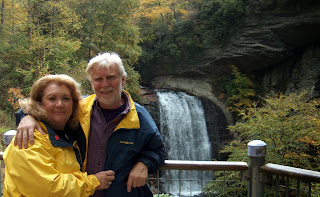 It always amazes me how many creative people labor away anonymously, eclipsed by what passes as “artistry” in our world of popular culture.  Their stories need to be told.

One such person is George Moffett.  We befriended George and his wife Suzanne quite by accident.  They were strolling down the dock where we kept our boat late on a summer afternoon in Connecticut.  At the time we had just purchased a 40’ Hatteras to live on during the summer months after having recently moved to Florida and we were working away, thoroughly cleaning the boat, I on the outside and Ann in the galley when a couple around our age stopped to chat.

They had a smaller boat on another dock but said the life we were living was their dream, especially on a boat of this nature.  So I said, would you like to see it even though it’s not exactly ship shape right now, we just bought it.  We would love to, was their immediate reply.  I ducked my head into the boat to tell Ann we have some visitors.  What, she replied, the boat’s a mess!  They know, don’t worry!  So they came aboard for a tour and before we knew it we ended up sitting on the back deck for hours, Ann having whipped up some impromptu appetizers, drinking wine, watching the sunset and talking.  It felt like we had known them forever.  That was thirteen years ago and over this time, we forged a meaningful friendship.

While still living in Connecticut they planned a road trip to Florida primarily to see their daughter who lived in Ft. Lauderdale at the time as well as a first-time brief visit to our home.  On their way down they received terrible news, their beloved only child, Kelly, had suddenly died from an interaction of her medications and they were asked to pick up her remains. 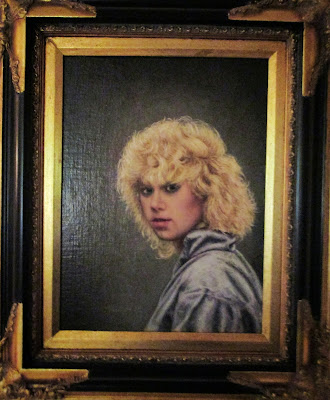 When Suzanne called us with that shocking news she told us they were then heading back to Connecticut.   Ann insisted that they at least come for lunch.  They agreed and finally decided to just stay the night as we would not hear of their driving any further that day.  But as they grieved and we lent emotional support to the best of our ability, we persuaded them to stay several more days, needing to recuperate from such an overwhelming trauma.  During that time we became even closer as we talked and shared our histories.  It was then that we learned some surprising things about George, who we discovered was a talented artist as well as a musician, picking up both creative endeavors later in his life. 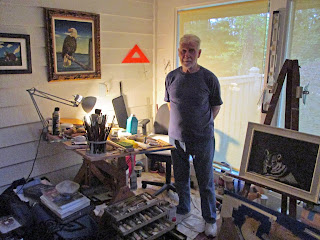 Before this tragic event they had sold their home in Westport, bought a condo in Milford as well as the boat of their dreams, a 43’ Hatteras.  Only three days after holding a memorial service for Kelly, George had a life-threatening stroke and was hospitalized in St. Vincent's Hospital in Bridgeport and spent more than three weeks there undergoing daily therapy. 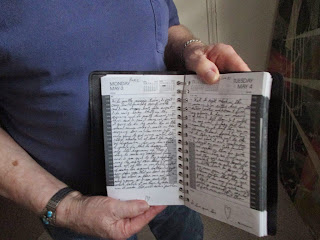 The prognosis was poor – he may never walk again unaided and he might have difficulty expressing himself. He was seen by the traditional medical community and an acupuncturist and although they were very instrumental in his recovery, equal credit goes to George for his determination to regain his cognitive and physical abilities, even when the medical community had its doubts.  Each day he wrote in a journal and although initially it was all gibberish due to the stroke, slowly it began to make sense.  He forced his mind to work again and to this day he writes in a journal, like a runner would run miles to stay in shape.  Almost all of his physical abilities returned as well. It was at that time they decided to move to Savannah and to sell the boat.

George worked as a house painter most of his life.  He had his own business.  That morphed into faux painting skills with his work in large demand by owners of some very beautiful Fairfield County estates.  His creative energy was expressed in that form as well. 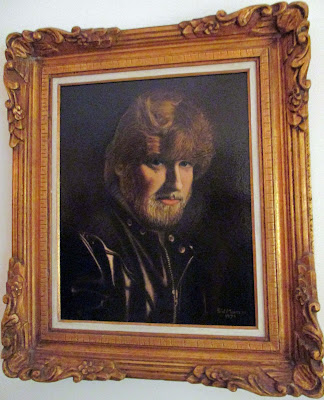 As a younger man it also came out in music.  George and Suzanne had several musician friends such as the baritone sax player, Jon Lanni, who played with musical great Maynard Ferguson as well as a bass player, Walter Urban, and many others.   Walter was in the market for a new bass and Suzanne approached him to purchase his "older" bass for George who always wanted to learn how to play an instrument but was discouraged to do so since his two brothers before him failed at their own musical efforts.   Suzanne wrapped up this gift in some pretty white paper and a big red bow and placed it right in the middle of the living room as a big “surprise” for George……like an old friend who just happened along.  "Hurry home, George," it called out to him, as Suzanne fondly remembers.  So you could say that she was very instrumental in creating George, the musician, while having to listen to the screeching sounds as he practiced and eventually learned how to play. 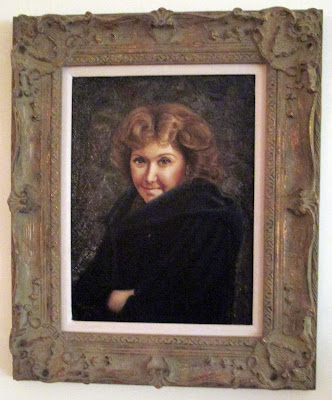 George then began to study with a number of teachers including Clyde Lombardi, a well known American jazz bassist who had extensive classical training.  Before long – and this is while he worked as a house/faux painter, George became a keen student of jazz and started a second career playing gigs in Fairfield County, and New York City, including accompanying the piano great, John Mehegan as well as many other fine musicians in the area.  Can you imagine picking up this incredible skill in mid life and playing at a professional level? 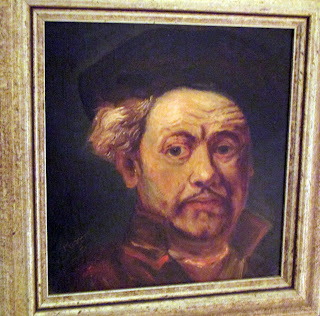 But then on to his discovery of the inner artist. One day George came across several oil paintings that so inspired him that he decided to contact the artist, Frank Covino, who had an art academy in Fairfield, Ct.  George enrolled and a whole new expression of art came to life. You might say an artist was discovered.  Many of the paintings depicted here are from those early days, particularly the portraits.  He sometimes worked from photographs, but frequently just as he imagined the person. His portrait of Rembrandt was painted during one long day and strictly from memory. 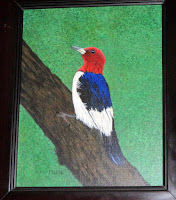 After the stroke, his musical days were behind him, and he had given up on art as well while he worked at his recovery.  But two years later he said it was time.  His first post-stroke attempt was of a woodpecker, but he was discouraged by it and again put his painting aside for awhile.  Eventually he went back to it, deciding he would let the painting “do him” rather than his attempting to “do the painting” so it was at this time he began to do abstracts and to this day his art has sustained him. 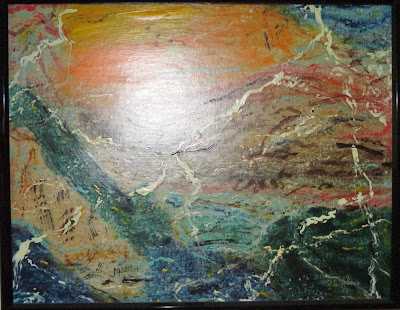 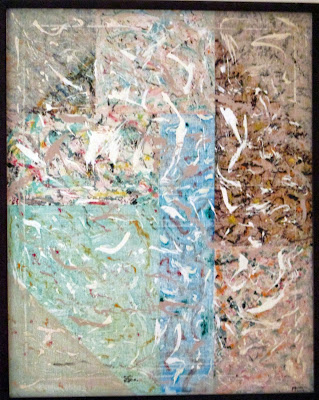 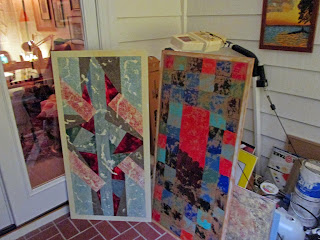 So when Ann visited Suzanne in Savannah recently – a “girl’s weekend” – I gave her a camera and asked her to take some photographs of his paintings.  Unfortunately a few were unavoidably photographed at an angle and others taken with a flash, both of which distort the painting.  But she did the best she could and with some editing I’ve managed to use as many as possible.  They tell the story of a man who found recovery through art, as well as showcasing a remarkably creative person.  Hopefully, this blog entry preserves some of his work. 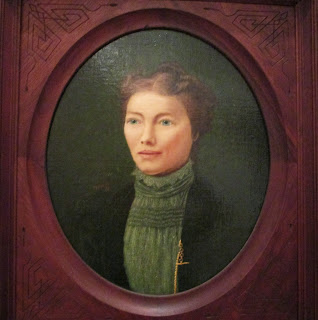 Using most software, you can click onto the first photograph and create a slide show.  The paintings are labeled as part of the JPEG title.  George has successfully worked in portrait, animal, and abstract painting, all in oil and all truly remarkable. 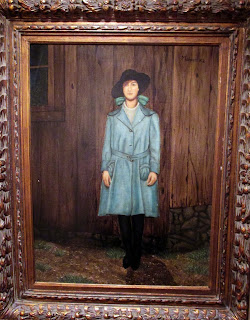 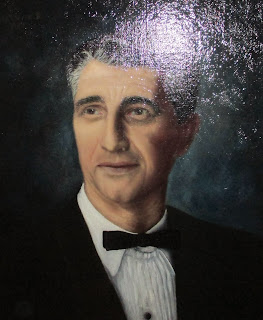 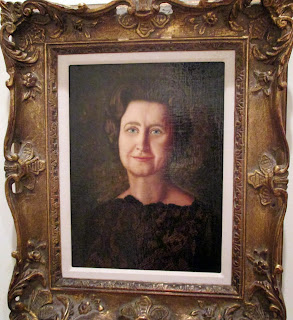 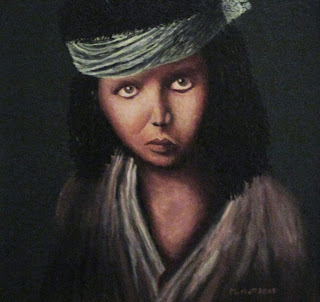 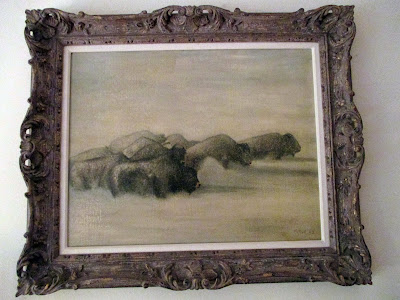 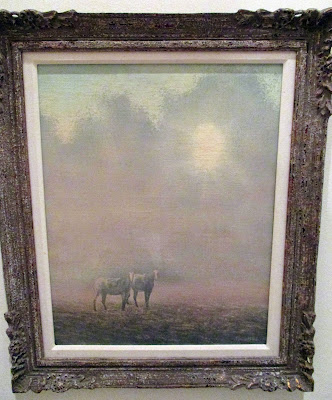 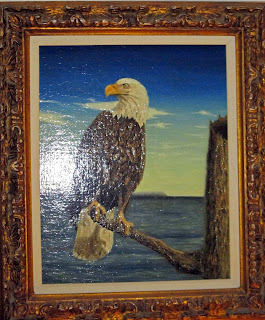 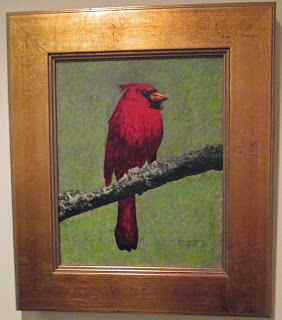 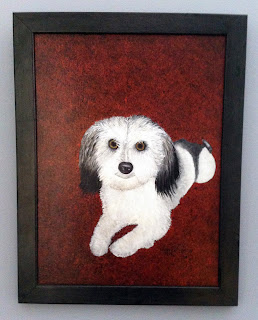 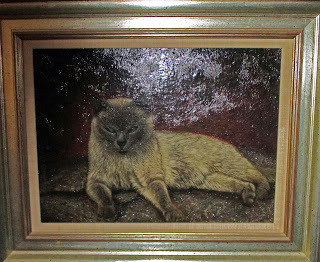 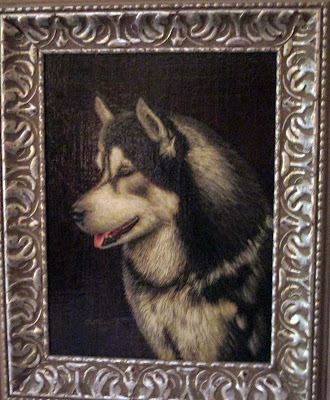 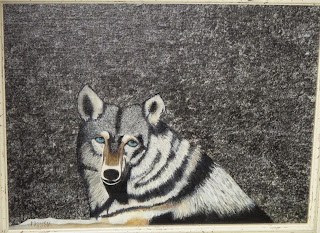 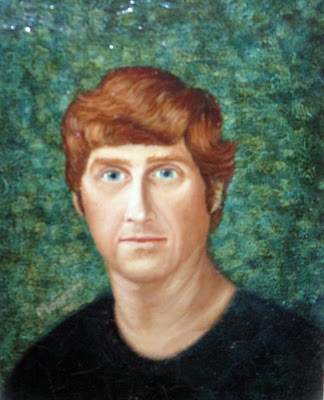