It is more than embarrassing. It could be politically devastating, the Obama administration caught in the cross hairs of political posturing as reported by the Washington Post, Solyndra docs: Politics infused energy programs. These documents show "Obama's May 2010 stop at Solyndra's headquarters was closely managed political theater....Meant to create jobs and cut reliance on foreign oil, Obama's green-technology program was infused with politics at every level."

Am I disappointed that Solyndra was allowed to get so out of hand? -- yes, but not surprised. There are parallels to the "Bush moment" in 2003 after Iraq had been invaded, when he arrived on the decks of an aircraft carrier in a fighter plane, dressed as a fighter pilot, to declare "Mission Accomplished!" -- the navy personnel cheering him on. It doesn't get any more of a political show than that. But, they call it "politics" for a reason. 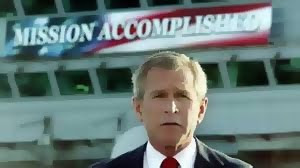 The worst aspect of these parallel moments is no mission was accomplished. The Iraq war, slogged on while thousands more Americans were killed, tens of thousands injured, not to mention a multiple number of Iraqis maimed or killed. And, when it is said and done, more than a trillion dollars will have been spent on the Iraq war. No mission accomplished there.

While Solyndra did not cost lives, and will not cost the American taxpayer anything remotely resembling the Iraq war, it also epitomizes a failed mission -- a serious detour in the attempt to achieve a modicum of energy independence, and to create jobs. Simply put, the Obama administration misspent valuable political capital on its "mission accomplished" moment.

So, while I understand the political posturing, and do not think Solyndra is out of character with what we have long become inured to, I am dismayed that Obama's first term is being squandered without serious progress in energy independence.

Obama made an interesting remark during his 60 minutes interview: "Don't judge me against the Almighty; judge me against the alternative." Obama choose hope and change as his mantra, a nice thought but unrealistic in Washington. So he is saddled with the sweeping generalization of his "promise" and it is probably why he is so despised by his adversaries. But when I think of the alternatives it makes me hope that he will change.

In the meantime we enter that dreaded season leading up to the presidential election. This year dinosauric Super PACs will be allowed to roam free in the Jurassic political park, organizations that can raise unlimited sums from anyone, including corporations and unions. Be prepared for an unprecedented level of vitriol in this election, with a constant barrage of negative political ads. Even if nothing else comes from the Solyndra debacle, it will feed the PAC beast.
Posted by Bob at 11:51 AM