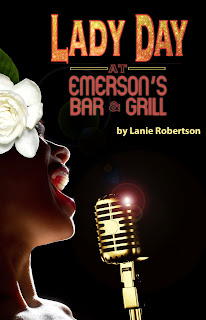 The Dramaworks season has ended but on a sad and powerfully striking note.  You’re not in West Palm Beach, but at Emerson’s Bar and Grill in Philly in 1959, a kind of seedy place, emblematic of the tail end of Billie Holiday’s life.  A lonely table is in front of the bar, her audience disappearing, along with her cabaret license consigning her to gigs outside of some of the famous places and large audiences she commanded in her past.  This gig is at Dramaworks, the stage having been transformed into this south side Philly night club, the “small house” side of the club, where the locals perform, not the main stage.  Satellite lights hang over the stage as well as the first few rows of the audience while red velour padded walls float behind the performers.  Perhaps “Mad Men “came here when in Philly on business, downing a few during those late night performances.   Dramaworks has created the perfect time machine and the only thing missing from the ambiance of this place are the cocktail waitresses serving the audience and cigarette smoke heavily hanging in the air. 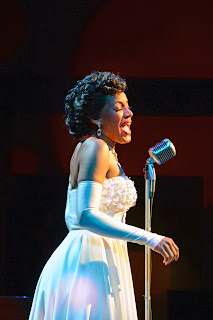 But we’ve come here to see Billie Holiday, or more precisely a dramatic impression of her, not an impersonation.  Tracey Conyer Lee channels Billie’s story, pain, and songs during this 80 minute, intermissionless performance.  She is an experienced actress, not a cabaret singer, although one would not know that from this evocative portrayal.  She is true to a remark once made by Billie herself: “If you copy, it means you're working without any real feeling. No two people on earth are alike, and it's got to be that way in music or it isn't music.”  During this performance we are convinced it is Billie mournfully singing to us, truthfully talking to us. She follows what Billie says in the play: “I’ve got to sing what I feel.”

Tracey Conyer Lee’s ability to pull off a legitimate gig must be credited in part to her highly experienced and extraordinarily talented piano accompanist, Brian P. Whitted who also plays the role of Billie’s manager, Jimmy Powers.  He is the musical director of the show, and is ably assisted by Phil McArthur on the bass.   There is the easy give and take between Billie and Jimmy on stage – mostly by eye contact, so typical of the cabaret scene and perhaps more typical of Billie’s routine at the end of her life.  She needed to connect on all levels. 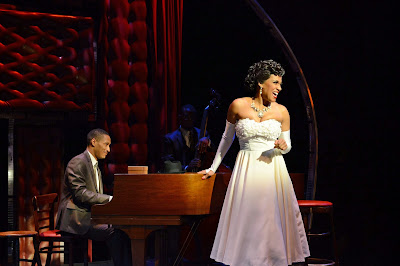 The playwright, Lanie Robertson, opens Lady Day at Emerson’s Bar & Grill with a typical cabaret intro, a jazz piece played just by Whitted (Jimmie Powers) and McArthur before Powers introduces Billie.  You immediately know you are in the hands of a great jazz pianist and accompanist.  Once introduced, Billy sings a couple of straight up pieces before beginning to tell her story, addressing the audience, looking back at Powers from time to time, looking for his approbation as well.  Once she begins her story between songs, she strolls over to the bar for a drink, or two, then more, until the show, her songs and conversation become darker, a little more rambling, when suddenly she desperately needs to take a break  backstage, Powers covering for her with another solo.  When she finally reappears, her left elbow length glove is rolled down, bruises and track marks visible.

At this point she dons her trademark gardenia, but she is now out of control, her songs disjointed, her accompanists trying to follow and fill in.  It is simply a bravura performance by Tracey Conyer Lee, holding the audience spellbound.  Yet at all times she manages to convey a dignity that comes from true art.  As she says repeatedly in the show, even as she self destructs on stage, “singing is living to me.”  And then summing up her life as a singer, “but they won’t let me.” 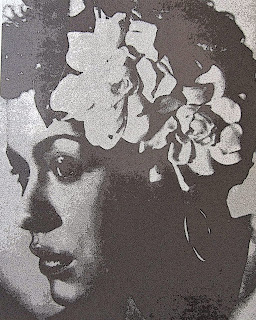 There are 14 songs in the show, with the dirge like “Strange Fruit” commanding a hushed sadness.  Her iconic “God Bless the Child” is included, as well as one of my favorites – one I play on the piano with some frequency – “Don’t Explain,” for which she wrote the music. (“God Bless the Child” was also written by her but “Strange Fruit” was not although she adopted it as her own – one does not think of the song without thinking of Billie Holiday.)  But many of the songs are ones I’ve rarely heard her sing, such as “Crazy He Calls Me” which in part she sings, very appropriately, to Powers.  She gives a tribute to Bessie Smith singing “Pig Foot (And a Bottle of Beer).”  And believe me, Tracy Conyer Lee belts it out!

Small ensemble plays like this might seem simple to put together, especially with its reliance on primarily one character.  But as J. Barry Lewis, Dramaworks experienced director explained, to pull off an evening like this requires a subtle “emotional layering” from the main character which is an extremely challenging job.  Each element, the movements, the lighting, the stage design have to be just about perfect to make the play transparent, becoming a night back in the 1950s, one in which Billie Holiday reconciles herself to the consequences of both victimization and poor choices in her personal life.  Jim Crow laws impacted her ability to perform in the south.  And then there were her own personal tragedies, being raped as a child of 10, obsessed with her first husband, Jimmy Monroe, known as “Sonny” (sometimes addressing Powers as “Sonny” as the play devolves) who turned her on to heroin early in her career.  After doing a year of jail time and losing her cabaret license, she was exiled from the big city night clubs, and ultimately consigned to gigs at out of the way places. As she says in the play, “I used to tell everybody when I die I don't care if I go to Heaven or Hell long's it ain't in Philly.”

We see her  grateful to be performing anywhere, just months before the end of her life, standing there in her trademark white dress, a vision designed and created by Leslye Menshouse, with  her signature gardenia, a light in the darkest days of her life.  Particularly painful is when she laments about always wanting to have a little home, children, and to experience the simple joys of cooking.  At the heart of it all she is an artist and the Dramaworks team captures the moment.

Mr. Lewis is assisted by the rest of his able team of technicians.  The lighting design by Kirk Bookman is especially important in this play, a spotlight on Lady Day as she sings, stage lighting changing colors to suit the song such as dappled blue when she sings the iconic “God Bless the Child.” His focus spot on her and then diminishing in size to her face and then fade out at the end, the level of her voice in sync, is the perfect ending.  The scenic design by Jeff Cowie captures that late 50’s lounge feeling inside a large oval construct and the sound design by Richard Szczublewski completes the illusion. 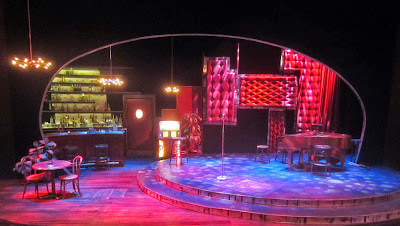 As Billie once commented, “There's no damn business like show business - you have to smile to keep from throwing up.”  However, this is one performance not to be missed, a fitting end to Dramaworks’ season.  The person sitting next to me said she saw the recent NYC production of the play with Audra McDonald and Dramaworks exceeded that production in every respect.  I believe it. 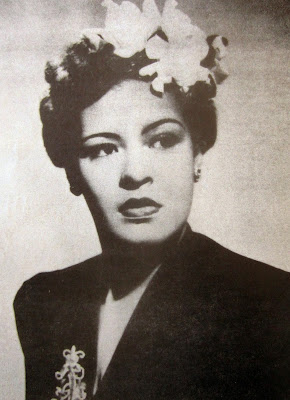