I Could Have Told You


One of the great joys of music is meeting different musicians and then hearing them play or sing pieces I’m not familiar with.  Wikipedia says The Great American Songbook, also known as 'American Standards', is the canon of the most important and influential American popular songs and jazz standards from the early 20th century.”  That’s enormous territory and although I’ve been playing songs from that genre for more than fifty years, I still come across new ones (to me).  Most are fun to play and some are very moving.  Such is the case with the song “I Could Have Told You” The haunting melody was written by the great James Van Heusen, a friend of Sinatra’s, and the melancholic lyrics were penned by the prolific lyricist Carl Sigman.

The  recording became a Frank Sinatra “signature song.” The Nelson Riddle arrangement was recorded as a single on December 9, 1953 just days after Sinatra reportedly attempted suicide over his broken marriage to Ava Gardner.  No wonder it is so mournful and heartfelt and supposedly he never performed it in his endless appearances on stage. Obviously, the song conjured painful memories. It later appeared on his 1959 compilation album Look to Your Heart and another one that same year, made up of mostly sorrowful songs, No One Cares.

It was also recorded by Bob Dylan (surprisingly to me) so if one likes his voice and style you can also find it on YouTube.  It can’t compare to Sinatra’s smooth tonality and phrasing.

Although I probably heard the song in my years of listening to Sinatra, I didn’t have the sheet music or take note of it.  I was “introduced” to it by a singer we came across in our many visits to the Double Roads Tavern in Jupiter.  The Jupiter Jazz Society headed up by Rich and Cherie Moore has a Jazz Jam there on Sunday nights.  Rich is a very talented pianist and can play almost any style. We’re supporters of the Society and try not to miss a performance.  We learned about the Society and Double Roads from our good friend (and my bass accompanist from time to time) David Einhorn who occasionally plays there.   So one connection leads to another in the small music world and there we saw a performance by an upcoming interpreter of the Great American Songbook, Lisa Remick.


A prediction: we’ll hear a lot more from her in the future.  She’s a perfectionist, the kind of singer we really appreciate, trying to go to the heart of a song, and singing it while conveying the emotional foundation of the lyrics and the melody.  Such is her interpretation of “I Could Have Told You” on her CD, Close Enough for Love. 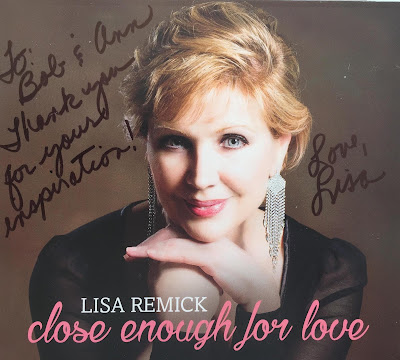 Thus, I was captivated by that song on her CD. I found a lead sheet for the piano and after playing it over and over again for myself, decided to record it and upload it to YouTube trying to allow the melody to speak for itself, with my usual disclaimer that it was recorded under less than ideal conditions in my living room and using a digital camera.  I played it just one time through and one can follow the lyrics which are below. It’s a gem of a song.