It was a night to remember on the boat.  Islip, NY, only some 25 miles away as the crow flies, had more rain than they have in an entire summer, 13 inches, in the early morning hours of Wednesday night.  Here we had only about two inches, but the wind was unrelenting out of the east and southeast, the most vulnerable direction in the Norwalk Harbor.  Plus it was an astronomical high tide.  Our boat is half way out into the Norwalk River so at about 1.30 AM around high tide, with the wind roaring and the rain horizontal, our boat began to pitch and roll.  Anticipating this weather, I had tied redundant spring and bow lines but within a short time, those stretched and we found ourselves occasionally banging into the piling on our port side.  Go out and put more lines on or tighten the existing ones a part of me said – no way; nothing would help, said the other.  Try to sleep I told myself, although it felt as if we were underway.

Sleeplessness was aided by anticipation.  The weather forecast for most of Wednesday was for more wind and rain, here and in NYC, the day we were going in for lunch and the theatre, something we had planned for months. By the time we could get off the boat and dock, and onto the train, we’d be like a couple of drowned rats, not to mention the difficulty of getting to the theatre, walking from Grand Central Station to the New York City Center between 6th and 7th on 55th Street.  We’re veteran New Yorkers and know how to book it to time the lights, but rain and wind would make that impossible, not to mention getting a cab. 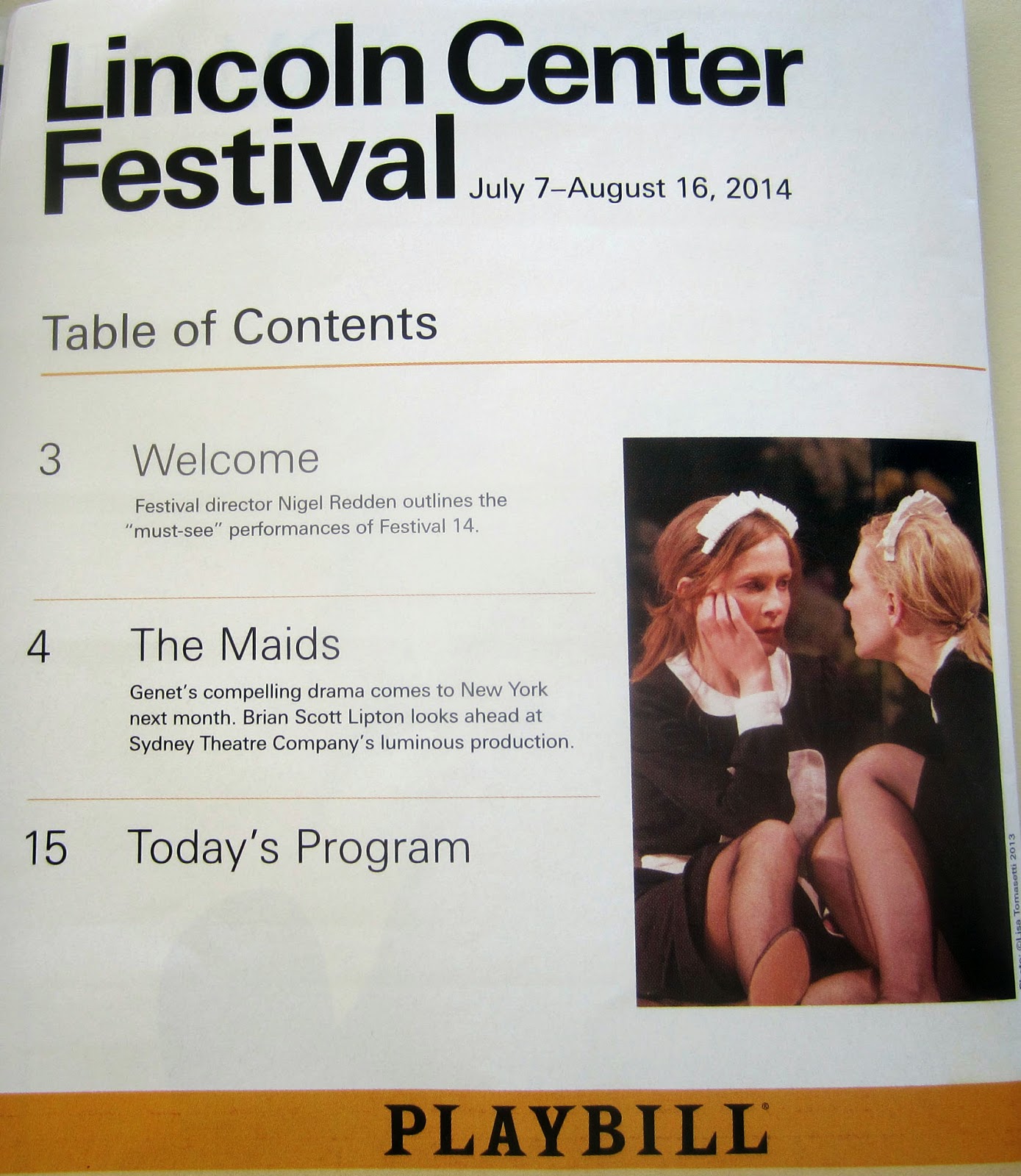 Months ago, as soon as I heard it would be appearing as part of the Lincoln Center Festival, I had booked tickets – 3rd row orchestra, practically center, to see the Sydney Theatre Company’s production of Jean Genet’s The Maids starring Cate Blanchett.  We’ve long admired this hugely talented actress, who has not only appeared in scores of films, but has been supportive of live theatre, particularly the Sydney Theatre Company which she and her husband helped to make known internationally after taking over the reins from Robyn Nevin. An added bonus in this production included two other highly acclaimed movie and stage actors, Isabelle Huppert and Elizabeth Debicki.  Having never seen Genet’s masterpiece, and always being a “fan” of the Theatre of the Absurd, and given the cast, how could we go wrong seeing this production?

Well, the weather and forecast Tuesday night / early Wednesday morning almost made us regret the obligation to go into the city, arriving soaked (if we arrived at all, given the reports of flooding). But miraculously, the skies cleared as we got off the train at Grand Central Station and we had a leisurely walk to a restaurant, Milos, near the theatre.  As it was recommended by our son, Jonathan, we met him there for lunch. 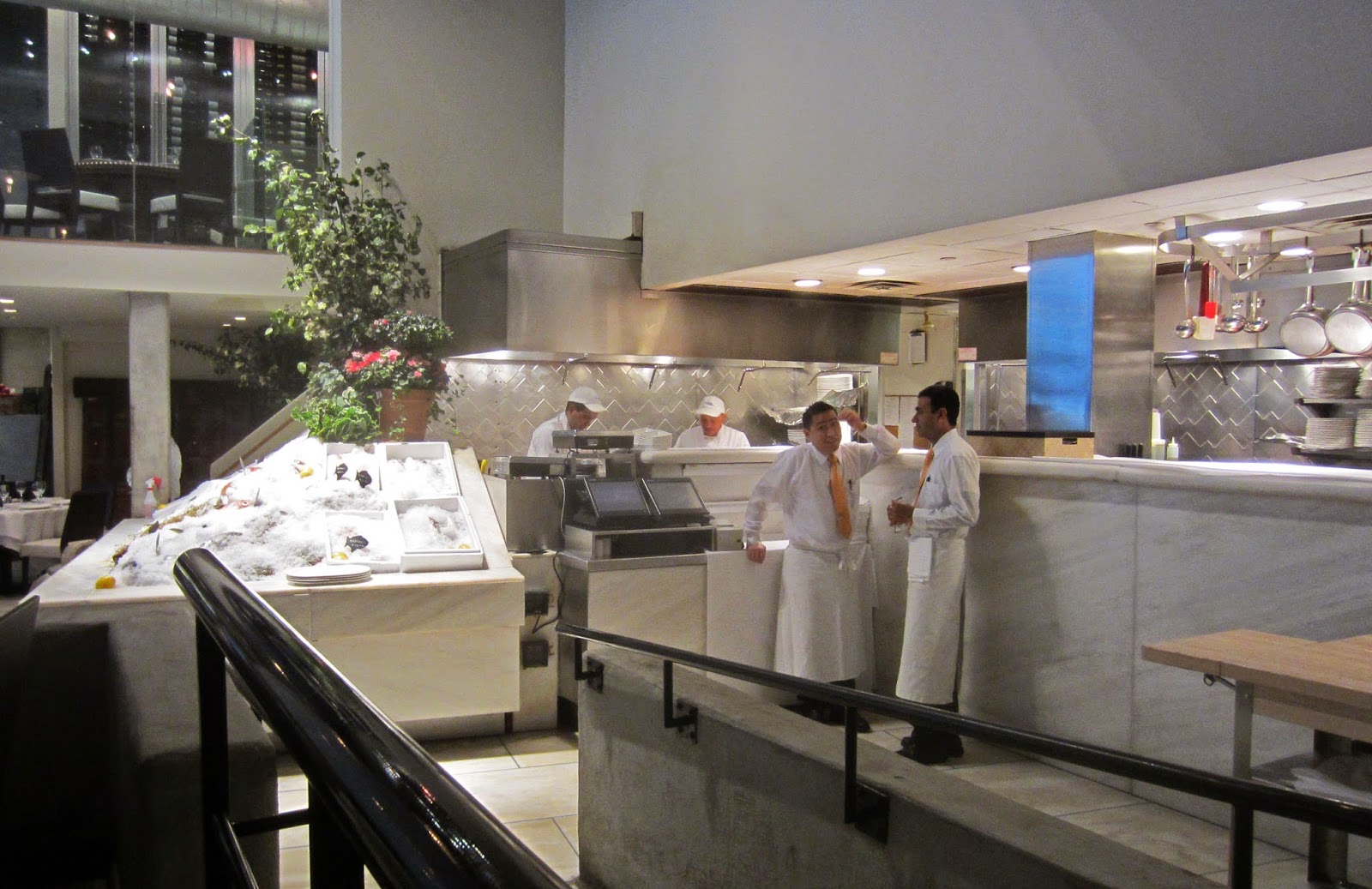 It is “restaurant week” in New York City so we were able to order a lovely and delicious Mediterranean meal at “reasonable” prices, compared to the typical astronomical ones. NYC restaurants of that distinction are frequented by executives seeking a power lunch and by “ladies who lunch” (as Sondheim put it).

As we entered the theatre we learned that our tickets were being scalped for $700 apiece, ironic I thought, people going to see a play by Genet who clearly despised the class of people who could afford to see his play.  I suppose the movie star cast, and the very limited engagement led to those prices – supply and demand! 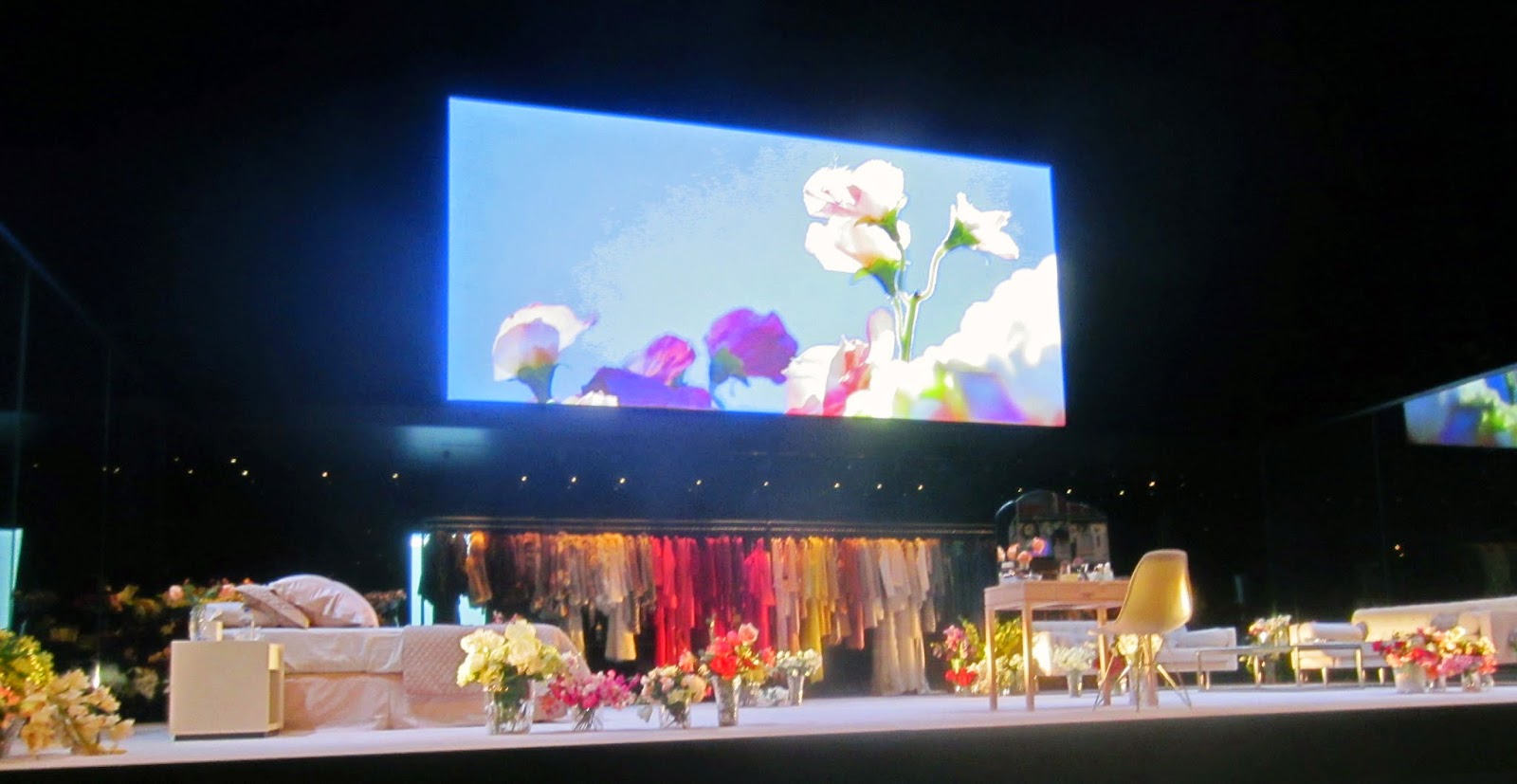 The stage set looked placid enough, but within only minutes into the play we knew that it would be our second maelstrom in 24 hours.  Crude gutter language, bodily fluids (spit and drool galore), and raw sexuality with the help of readily available props on stage unfolded. Voyeuristic views of what went on in the off stage bathroom shot live with hand held cameras and projected on a huge screen on stage, and close ups, sometimes of flowers (there were hundreds of them in vases all over the stage), but frequently of the actresses faces slapping on powder and lipstick at the “mistress’” make up table, or close ups of humping or physical abuse on the bed or floor, accosted us for almost the next two hours, with no intermission.  And then there is the “plot” – really the imaginary murder of the “mistress” by the two maids, one pretending to be the mistress (Cate Blanchett) and the other the maid (Isabelle Huppert), fantasizing the murder, in anticipation of the arrival of the “mistress.”  Genet’s play was loosely based on a real life incident, but of course he extrapolates it to its most outrageous and sordid extreme. 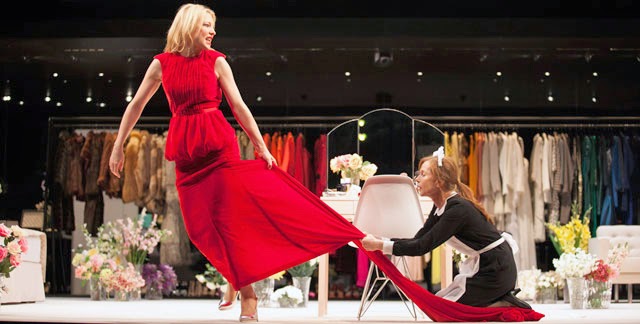 This production puts a 21st century spin on Genet’s work, not only with the innovative use of viewing the characters using two video cameras and projecting those emotions close up, but casting a much younger woman, Elizabeth Debicki, as the “mistress.”  She not only has the class advantage over her imprisoned Maids, but she has youth and indeed, she struts it – all six feet three inches of her gorgeous young body. And when she finally arrives about half way through the play, one can appreciate Blanchett’s impersonation even more.

Above all, there is an energy level that is poured into this production which is incomparable to anything we’ve seen on stage – all three of them playing their roles on the borders of frenetic madness.  How, we thought, would it be possible for these same actors to do an evening performance? After all, we, the audience, left exhausted, and can only imagine what they would have to do to recover.

Afterwards I wondered to myself why any actor – especially well-established screen actors – would take the risks of these roles on stage, in front of a live audience.  Film acting must be so, so, much easier.  But I think it says something about these particular actors, accepting a gauntlet thrown, the challenge to excel overwhelming the perceived risk.  They are just that good.

The philosophical merits of what Genet has to say are clear from 50,000 feet, but I’d have to read the play to have a better, detailed understanding.  My one criticism concerns the maid Solange played by Isabelle Huppert, a French actress of renown, and perhaps selected for the role as homage to the French playwright, Genet, but her strong French accent sometimes caused many missed words.  We all were desperately trying to make sense of her complete dialog, so important, I think, in understanding Genet – and particularly the impassioned monologue at the end of the play.

That comment, however, is not to detract from the overall production, something we’ve never experienced in the theatre, and with a standing ovation at the end, we cried Brava! Brava! many times over during their multiple curtain calls. 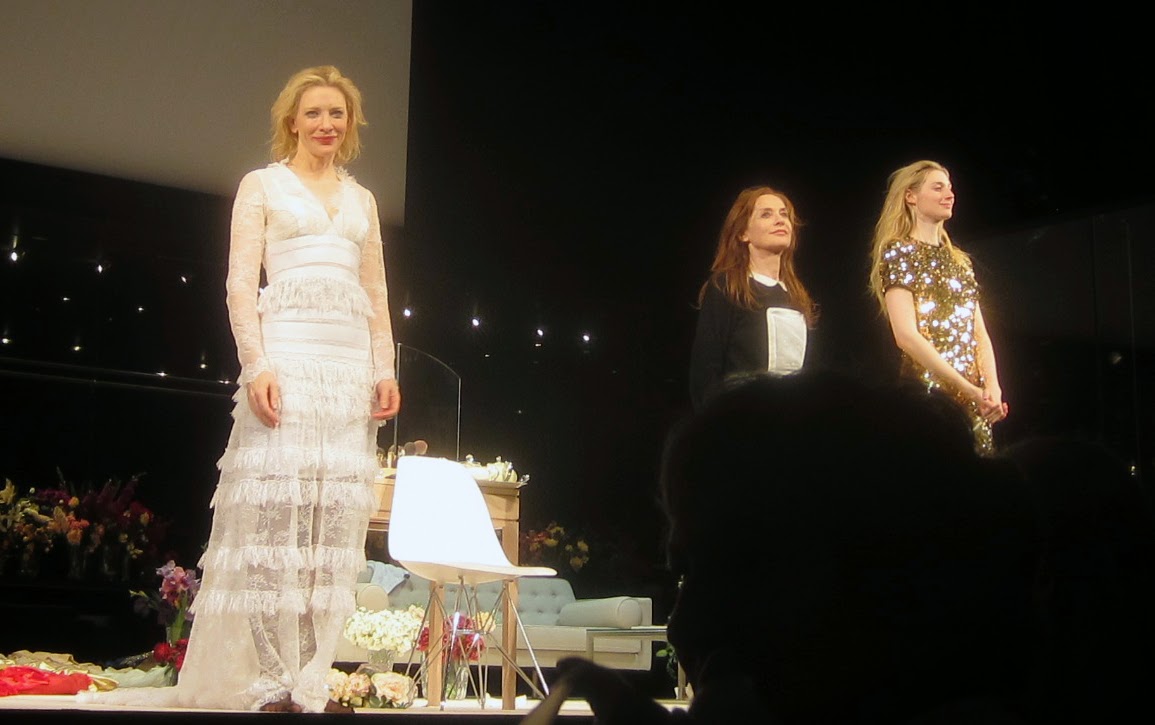