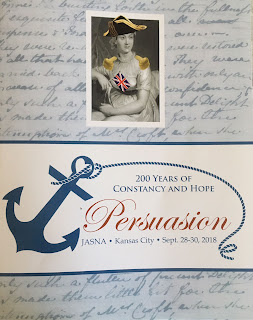 So says Lady Russell in Jane Austen’s Persuasion.  And indeed it has come to pass.

Joining Ann for the four day JASNA AGM (Jane Austen Society of North America Annual General Meeting) was the motivating factor in traveling to Kansas City, a city as I have previously said was worth visiting on its own (CLICK HERE FOR THE FULL WRITE UP).

This was her third AGM and since the focus was to celebrate the 200th Anniversary of the publication of Persuasion, Ann’s favorite of the six Novels Jane Austen wrote in her short life, I could hardly refuse.

Rather than my rereading the novel, we watched the two film versions, particularly focusing on the one with Amanda Root as Anne Elliot.  That version is very faithful to the book.  I also boned up on the novel reading the long entry in the Jane Austen Encyclopedia that I published towards the end of my publishing career and then reading the very extensive piece of literary criticism on Persuasion by Robert Rodi in his informative and outrageously funny, Bitch In a Bonnet: Reclaiming Jane Austen From the Stiffs, the Snobs, the Simps and the Saps.  This is very highly recommended if you are familiar with Austen’s works.

But shame on me, I didn’t reread the work beforehand, but felt I knew it well, as well as Austen’s other five novels.

This event attracted Austen devotees from Canada, England and from all over the US, totaling almost a thousand participants.  There were four outstanding Plenary speakers, eleven Special Interest Sessions and twenty eight Breakout Sessions from which participants could choose only two each for Friday and Saturday.  Tough decisions since they all sounded superb and in fact delivered fascinating talks. There were many tours offered to visit Museums (which we had already availed ourselves during our independent preliminary visit), a Pump Room Tea and Fashion Show and many workshops to learn English Country Dances, or how to make Turbans and Bandeaux or other workshops to sew Jane Austen keepsakes.

Of particular interest to me as an old salt myself was the setting of the novel  during the times of the on again off again Napoleonic Wars, the role of the Navy, where one could rise to wealth other than being blessed by inheritance and the effect that had on society.  The readers of Persuasion at the time were well aware of the impact of the deleterious transition from wartime finance, although the characters in Persuasion were not.

All in all it’s a perfect novel bridging the classic and romantic periods and I’ve always wondered why; when I went to college in the early 1960s, Jane Austen was not considered among the most important English writers of her time.  Well, time and Janeites have rectified that.  Who else could have written, as she did in Persuasion, “..…none but those who invite from the heart could think capable of accommodating so many.”

My own favorite contemporary writer, John Updike who died a few years ago is similarly not given his due, but perhaps it will take a dedicated group of “Updikeians” in the future to discover his unique gift for social commentary as Jane Austen clearly has. 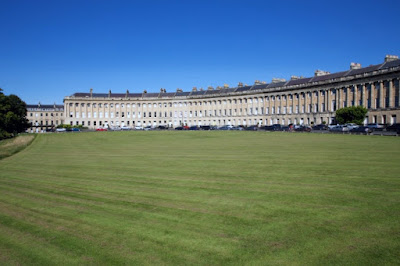 Ann and I also feel a very personal connection with the novel as it is partly set in Bath where during one of my publishing trips to Oxford we detoured to Bath and booked a room at the Royal Crescent where you can see Anne (Sally Hawkins in another adaptation) running along in the film.  It is a magnificent example of Georgian architecture, just sweeping and breathtaking.  I don’t know why, but when we arrived we were booked into the Duke of York Suite, the largest “hotel” room we’ve ever occupied, replete with its own guest book signed by dignitaries, now including us, and two enormous bouquets of fresh flowers arranged in great urns.  Guess they thought, crazy Americans!

There were in additional two extraordinary JASNA events, one being an Assembly Room Concert one evening given by the very talented Ensemble Musica Humana which presented a concert based on programs actually performed at the Bath Assembly Rooms. The highly gifted musicians consisted of a soprano, a harpsichordist, flautist, and three violinists.  An enchanting musical presentation, with an impressive performance of Mozart’s Piano Concerto in C major played on the harpsichord.

For Ann and even myself, I would have to rank seeing the acclaimed actress and star of the 1995 movie, Persuasion; Amanda Root, as the highlight of the conference.  Although beginning a movie part in England would initially have interfered with her coming, she negotiated with the director and slipped away to join us for two days.  She is the face of the novel’s heroine, Anne Elliot.  Here I am in the audience eagerly awaiting her appearance with two Janeites behind me: 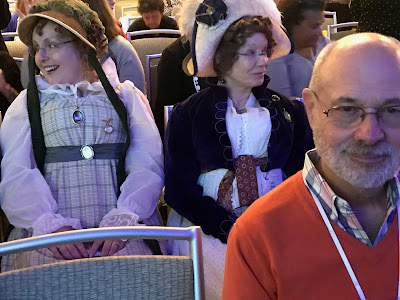 We were treated to a lengthy film interview of Amanda discussing many aspects of her role and playing opposite Ciaran Hinds including many of her impressions of doing justice to such a part.

Afterwards, she stepped onto the stage in person (swoon, swoon!) and read from her own diary that she kept during the filming as well as “performing” many of the iconic speeches delivered in the film.  She was delightful to see, so warm and friendly, totally open to answering all the questions asked of her.  She was seen round and about during the conference, clearly a Janeite herself, and just a bright, energetic, down-to-earth human being (who I might add doesn’t look like she’s changed a bit since playing Anne in 1995!

The last night consisted of a Regency Banquet, a Promenade with a Scottish Piper, dinner where we sat with three of Ann’s Janeites from her own local chapter 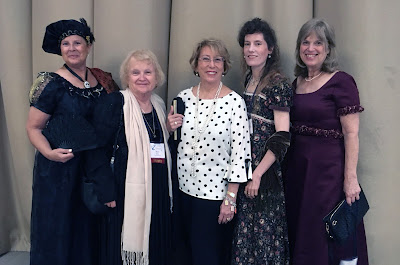 and then highly anticipated Regency Ball. 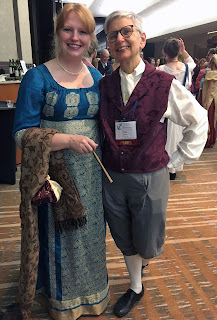 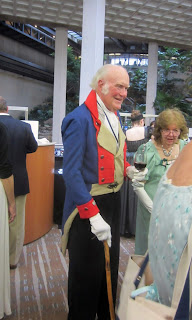 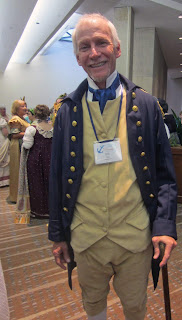 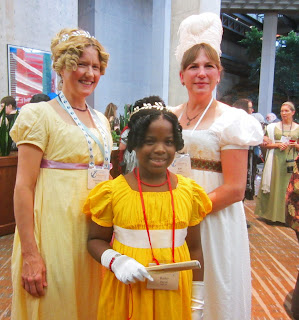 Elegantly dressed ladies and gents in clothing from the period were the norm.  Mia culpa, although Ann had a period dress from last year's ball, I had urged her to pack light for the week, so she, as well as myself, were not in 19th century dress.  Again, I shoulder the blame (as well as having to lift all suitcases!). 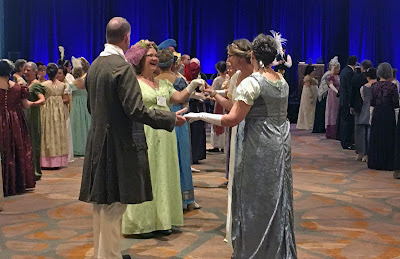 We concluded with a breakfast the next morning with another fascinating presentation by one of our Plenary speakers and then previews of the next two year AGM’s.  All in all, a wonderful week in KC and certainly Jane Austen had people such as the Janeites in mind, 200 years into the future, when she wrote “my idea of good company…is the company of clever, well-informed people, who have a great deal of conversation.”