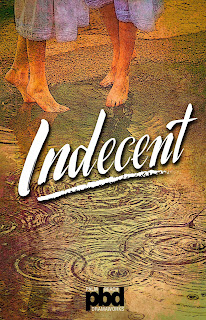 Ashes to ashes, dust to dust….a theatre troupe comes back from the dead to tell its story.  Let this superb Dramaworks production wash over you.  Bask in its bitter-sweet intensity and breathe in its essence of purity.  There is a tragic sadness to the production, juxtaposed to unadulterated joy, of living, of loving and of art.  Dramaworks’ production of Paula Vogel’s Indecent is faultlessly potent.

While Indecent is a play about a very good play, Sholem Asch’s 1907 God of Vengeance, it is more of an impressionistic work, capturing feelings about themes that are exposed in the actual production of God of Vengeance:  gender discrimination, lesbian love, censorship and persecution, art and freedom, anti-Semitism and immigration.  All of this is encapsulated in playwright’s Paula Vogel’s love poem to theatre itself.

God of Vengeance is dated in its melodramatic approach to the subject of Jewish filial tradition and obligation, incorporating a lesbian love affair with the powerful retribution all being played out ironically above a Jewish brothel.  As Asch’s wife, Madje, says in Indecent of her young husband’s play, My God, Sholem. It’s all in there. The roots of all evil: the money, the subjugation of women, the false piety … the terrifying violence of that father …and then, oh Sholem, the two girls in the rain scene! My God, the poetry in it—what is it about your writing that makes me hold my breath? You make me feel the desire between these two women is the purest, most chaste, most spiritual—

One of the central characters in God of Vengeance is father and husband Yekel, who lives with his family upstairs, while operating the brothel below.  He has one purpose in life: to make his “perfect, innocent” daughter, Rifkele, into a marriageable candidate for a scholar from a fine family.  He commissions the writing of a Torah which is to become part of his daughter’s dowry.  Instead, a prostitute from his brothel, Manke, and Rifkele have fallen in love which results in Yekel’s rage and violence.

In Indecent Vogel chronologically takes the productions of God of Vengeance through different iterations, both real and imagined, over a swath of time to another level, focusing now on the two lovers and on the obscenity charges which were brought against it for its infamous lesbian scene (which played without incident before the Broadway production in the early 1920s). The play covers the sweep of history since Sholem Asch wrote the work, to the time he disowned it in the 1950’s.

Indecent has a musical core in this robust production.  Dramaworks’ choreography, under the direction of Lynnette Barkley, working with its klezmer musical underpinning, is stirring, unforgettable, defining the emotion of the moment through dance, mostly to evoke the Jewish Horah circle dance but also including wonderfully arranged Berlin cabaret style numbers for dramatic effect.

Three very talented musicians weave Yiddish sound throughout the play.  Glen Rovinelli is both the Musical Director and the Clarinet player.  Anna Lise Jensen is the Violinist while Spiff Wiegand is the Accordion player.  Music and dance were always important in Yiddish theatre and Paula Vogel incorporates these elements as a celebration of Jewish life and culture.

J Barry Lewis directs this Gesamtkunstwerk (“a total art work …that synthesizes the elements of music, drama, spectacle, dance, etc.) with a multimedia mix of 155 slides projected on the wall in the background which make the story clearer, and scores of scenes (characterized as “blinks in time”), some as few as three or four lines, bringing clarity to the narrative.  Plus he’s working with seven actors playing forty different roles, telling multiple stories with subplots.  It is a testament to his skill as a director to make it all seem natural and transparent.  It is indeed, a total work of art.

He has the “help” of one character in the play, Lemml, achingly played with such poignant conviction by Jay Russell, his PBD debut.  Lemml is the only character played by one actor with no other parts in the play.  He serves as the effective storyteller as does the narrator in Our Town.

Lemml stays with the play as its stage manager in each and every one of its performances over decades, to the point where he feels ownership but is ultimately betrayed by Sholem Asch who allows the play to be deleteriously edited for Broadway and refuses to defend it in court.  All of this action is taking place while Europe’s anti-Semitism is on the rise, and we suspect the fate awaiting Lemml and the troupe as they leave America to return to Europe.

Lemml says to Ashe: I am done being in a country that laughs at the way I speak. They say America is free? What do you know here is free? All over Europe we did this play with no Cossacks shutting us down. Berlin, Moscow, Odessa—everywhere there is theater! You don’t have the money for a ticket? Tickets over there cost less than a cup of tea. Then you dress up nice in your best coat and maybe you stand up in the second gallery, but you can say to your grandchildren: “I saw the great Rudolph Schildkraut in Sholem Asch’s The God of Vengeance!” I am leaving this country.

Otherwise, this gifted ensemble cast plays multiple characters.  When Lemml introduces the troupe, he divides them into three groups.  First the fathers, all of the mothers, the sagest of our characters, or the ones who remain fools at any age played in this production by PBD veteran Laura Turnbull and by Mark Jacoby making his PBD debut.  Both are seasoned performers who bring their long list of acting credits and accomplishments to their parts in this production.  In addition to other characters, their main role in the play within a play is that of the father and owner of the brothel, Yekel, and his wife Sarah, who was formerly a prostitute.

Lemml continues:  And our members of the troupe who are in their prime!”  In this production there are two PBD newcomers.  Making a stunning debut is Kathleen Wise who is Manke, the prostitute, among other characters.  She sings and dances and acts with a flawlessness that is mesmerizing.  Matthew Korinko makes his presence known with his rich voice, and convincing ability to play five roles, effortlessly changing from a NYC cop to the Rabbi Joseph Silverman, who brings legal action against the play.

Finally, Lemml says, And our ingénues!...All the brides, all the grooms, the writers, the socialists. So ardent in their beliefs, so passionate in their lovemaking.  Here we have the seasoned PBD veteran Cliff Burgess who has the distinction of playing the younger Sholem Asch as well as Eugene O’Neill (briefly), not to mention three other characters.  He always brings an ardent sensibility to every part.  Finally, there is the PBD debut of multi talented Dani Marcus gorgeously playing Rifkele with six other brief roles.  With her expressive face and exquisite singing voice, she adds a strong dimension to this incredibly talented cast.

When Marcus and Wise are on stage as Rifkele and Manke, their presence and chemistry is striking. They even play the roles of “The Bagelman Sisters” singing a rousing rendition of “Bei Mir Bist Du Schoen” which the Andrew Sisters would envy in a brief scene from Grossinger’s in 1938.  (I did mention that there were scores of scenes, didn’t I?).

In most shows one can point to the star or co stars and evaluate their performance.  Indecent is about an acting troupe and the entire Dramaworks cast becomes that troupe, feeling their pain and joy to such an extent that the audience is viscerally brought into this production.  It must be an actor’s dream to be in this troupe and it shows singing such songs as What can you makh dis is America! Iz America, un vot ken you makh? Or What can you do? It’s America! It’s America, so what can you do?

Michael Amico’s scenic design is in keeping with the ghostly acting troupe on stage, so there is empty space, reminiscent of ruins, in which the actors can tell their story.

Lighting design by Paul Black includes some 350 light changes, all intended to provide a sense of the location rather than the reality of the location.  The lighting is also suggestive of those dark dramatic moments with nightmarish shadows on the back wall, as well as a cabaret feeling of Berlin in the 20s.

With so many characters being played out over decades, costume designer Brian O’Keefe scores another triumph of period piece and ethnic identity verisimilitude including quick costume changes (many right on stage).  Brad Pawlak’s sound design focuses on the musicality of the production.  Stage Manager Debi Marcucci keeps track of untold lighting cues, costume changes, suitcases, chairs and tables, all constantly shifting between many scenes.

One cannot emerge from this production after its famous love scene in the rain without a sense of wonder.  Perhaps it is also the intimacy of the PBD theatre itself. When you are so close to the action in this play, and it is in constant motion, you simply feel part of it.  You may leave with the love scene in your heart, but Paula Vogel’s imagined words of Sholem Asch which precedes that gut retching joyous scene sound a clarion warning call to the arts, immigration policy, and tolerance:  I no longer care what is done on the stages of this country. Theater companies are started by young men who have the luxury to care about where they live. Or the false belief that they will be allowed to live in the place they care about.

A blink in time.  Palm Beach Dramaworks, still theatre to think about. 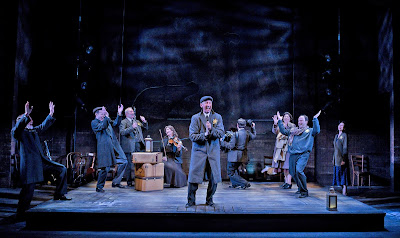