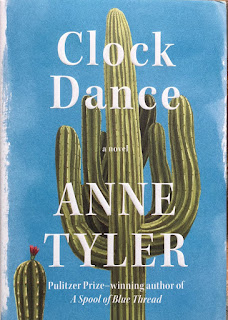 Time, time, time see what's become of me (Paul Simon, “A Hazy Shade of Winter”).  That pretty much describes the action of most of Anne Tyler’s Clock Dance.  I have the distinction of having read nearly all her novels (maybe all) and this one, as well, is set in what I’ve come to call “Tylerville.”  It’s a mythical place where everyday people live, made memorable by Tyler’s gift for characterization.  Tylerville is a place in Baltimore, if you want to put it in a real world context.

We follow the main character in the novel, Willa Drake, kaleidoscopically, chapters devoted to 1967, 1977, 1997, 2017 from the vicinity of Harrisburg, Pennsylvania, to Coronado, California, to Tucson, Arizona, and finally and fittingly, Baltimore.  In her last novel, A Spool of Blue Thread, it was the protagonist’s son who ends up searching for his own sense of belonging and place.  In this novel, it is Willa.

In her “Tyleresque,” prose we learn of the deaths of her parents, her two sons, Ian (now living in Colorado, and mostly out of cell phone range) and Sean (in Baltimore, explaining Willa’s connection there in part), the death of her first husband, her estrangement from her sister, Elaine, and her wifely obligations to her second husband, Peter, a semi retired lawyer who calls her, affectionately (but personality appropriate) “little one.”  As years wear on, she also becomes somewhat estranged from her two sons and finds herself living without purpose.  Until the call from Baltimore, and to tell more about the nature of that call is a spoiler.

In Baltimore we are introduced to a number of quirky characters, so typical in Tyler’s works.  She has the ability to make memorable people, all the pieces needed for a character driven novel.  Be prepared to share Willa’s journey with her collection of friends in Tylerville, Denise and her daughter Cheryl, Mrs. Minton, Callie, Ben Gold, Erland, Sir Joe, Hal, Richard, Barry, and let’s not forget Robert, the cat and Airplane, the dog.  All have their lives changed or touched in some way by Willa and in turn so is Willa’s.

At first I found the novel slow, even maudlin.  Did I care about Willa or just feel sorry for her?  Just at the point of fish or cut bait, I’m hooked by Tyler as the plot gathers momentum and Willa makes the transition from an after-thought in a male dominated world to something she desperately needs: to be needed.   At 61 she laments not having a grandchild, not having a daughter and through a slow osmotic process SHE adopts not only a family, but a place to live that finally feels like home.

Time and aging hang heavily on every page.  Willa’s father explains how he finally dealt with his days alone after the death of her mother (after Willa lost her first husband): “I broke my days into separate moments,” he said. “See, it’s true I didn’t have any more to look forward to.  But, on the other hand, there were these individual moments that I could still appreciate.  Like drinking that first cup of coffee in the morning.  Working on something fine in my workshop.  Watching a baseball game on TV.” She thought that over. “But…”she said.  He waited. “But…is that ENOUGH?” she asked him. “Well, yes it turns out that it is,”he said.

Three pre-teen girls play a game, each standing behind the other, their arms extended, all six moving in stiff, stop-and-start arcs in time to the clicking sounds that Willa could hear now punctuating the music.  “It’s a clock dance!” Cheryl shouted, briefly peeking out from the tail end. “Can’t you tell?”  Of course: those clicks were tick-tocks.  Those arms were clock hands, jerking in time to the tick-tocks like the hands of those stutter clocks on the walls of grade-school classrooms.

But when Willa thinks of her own version of a clock dance many pages later, it is a powerful reminder of our mortality: If Willa were to invent a clock dance, it wouldn’t look like the one the three little girls had shown her.  No, hers would feature a woman racing across the stage from left to right, all the while madly whirling so that the audience saw only a spinning blur of color before she vanished into the wings, POOF!  Just like that.  Gone.

The theme of the novel and the last chances presented to Willa couldn’t be any clearer than that.  Change or poof, gone.

In my review of her last novel,  A Spool of Blue Thread I said Tyler was showing her age.  Even more so here, now three years later.  Although Willa is “only” a 61 year old, I look to another character, Mrs. Minton as the future one Anne Tyler fears, a widow (like Tyler who lost her husband in 1997, the same year Willa loses her husband) who now uses a walker (“just for balance”), and when Willa first sees her “out of her housecoat” notes: Her skirt was unbecomingly short, barely knee-length, so that her blue-white mottle shins showed, and her sleeveless blouse exposed her stringy arms.  Aging is not a pretty process in Tyler’s eyes, but what is the alternative?  BTW, I am just slightly younger than Tyler and maybe that’s why I relate so much to her world-view.

Her detailed descriptions, noting all things relating to her characters, make her our very own Jane Austen, although sweeping love affairs are not her province.  Tyler is one of our finest living novelists, still going strong.  I only buy her books in hardcover, to enjoy them as permanent additions to our bookshelves, and as evidence that we still know how to make a real book.  As I concluded in my last review, “Tyler may be showing her age, but clearly with no diminution of her writing skills.”