Happy to hear that my 2013 pick for a pitcher destined for the major leagues, Andrew Heaney, threw a 1 hit gem for the LAA last night.  Wow.

When I saw him in pitch for the Marlin’s Class A+ minor league team in June 2013 I said he is a quality lefty and already has great control. His fast ball was clocking at 93 maximum, usually in the low 90s, but he was working the ball mostly at the knees.  His off-speed pitch, either a cutter or a curveball was in the low 80s.   I went on to say he follows another famous lefty Jupiter Hammerhead alumnus, Cliff Lee, who pitched here in 2001. He too relies on control -- and is about the same size as Andrew Heaney, who's listed at 6-2 and 190. But he looks much thinner than that and needs to work on building himself to his advertised weight for stamina and to further develop his off speed pitches.  I'll go out on a limb and predict he will make the majors in 1-2 years.

Well the stamina is there as he threw 116 pitches yesterday, and the pinpoint control as well, 81 of those for strikes.  His fastball was at 95mph, even in the 9th inning, mixing with the same curve I saw back then and with an effective change up.  He’s now the complete package.

Added bonus last night, it was his first complete game as a professional, recording all 27 outs on his 27th birthday!

Attaway to go Andrew. And I’ll be a professional scout yet! 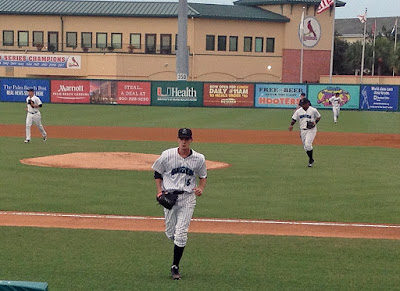