I conflate the two now. 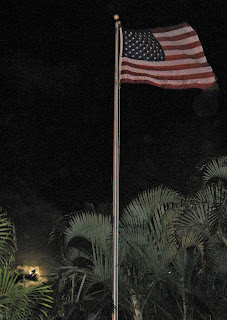 In the past, I’ve written about Memorial Day and our soldiers who have died defending our country, although lamenting about how we’ve turned it into a sales “holiday” for mattresses and cars.

That should be the worst of it.  Now we should also remember our teachers and students who have “fallen in battle” thanks to the NRA and our so called leadership acting as a facilitator.

The most recent shooting at a Santa Fe, TX school was not with an automatic weapon but an equally deadly hand gun and shotgun.

These guns were taken from the shooter’s father.

It brings up the obvious question of responsibility.  Should the father be held liable?  Or society?  Both of course.

But the precise numbers are irrelevant.  Gun violence, now prevalent in our schools, is intolerable in a civilized society.  Any society. All these weapons were "born to kill." 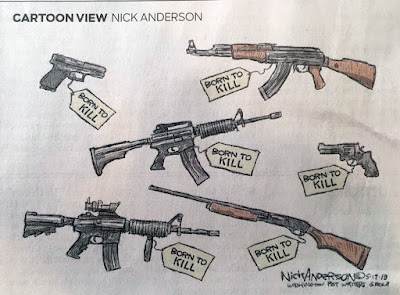 I’ve now written dozens of times about gun control and in particular the need to outlaw military type weapons, institute stringent background checks, age limits, etc., all the usual ideas and have seen the usual push backs to the same.

I’ve also (not uniquely) suggested that firearms be regulated in the same way automobiles are, requiring registration and tracking when one is sold.

I go back to this argument as it is more of a total solution than any others.

There are of course persuasive arguments against the bureaucracy of establishing a Federal or State system of a “Bureau of Firearms Control.”  Expensive.  Loss of freedom, Big brother watching, etc. etc.  But we tolerate those for automobiles, which also includes testing, insurance, inspection, etc.  We do so for the greater good of society.  We establish laws governing their use and prosecute when those laws are broken, even by generally “law abiding citizens.”  Gun ownership advocates make virtual talking robot arguments that gun laws only hurt the “good” people while “evil” ones ignore them and thus, we should have fewer gun laws.  Talk about circular logic.

We take off our shoes at airports because someone tried to blow up a plane with a shoe. My constitutional rights allow me to wear shoes!

Annual gun deaths are now approaching those caused by motor vehicle incidents (the latter declining and the former steadily increasing).

Getting to the difficult part, implementation.

Those choosing to keep their weapons, and those buying new ones, must register them with renewals required.  If the registered weapon is given or sold to another, forms have to be completed, the item identified, with the new owner’s name and address.  Then the new owner has 30 days to register them.  Registration fees will support the process.

Gradually a data base will be developed and ones who have a collection of weapons, an arsenal, would be identified and flagged as dealers, subject to another level of scrutiny and regulatory control.

This is complicated stuff and the devil is in the details.

Indeed, some (especially the “bad guys”) will ignore all of this, but they will be subject to prosecution if found with unregistered weapons, or if someone is found with an unregistered weapon purchased or given by them.  It will take time, maybe decades, to work through this group.  It has to start sometime.

And while more regulatory control and knowledge of our lives is abhorrent to me, something has to be started NOW and a more comprehensive solution needs to be sought by our lawmakers.  No more Sandy Hooks, Parklands, Santa Fes.  Now.  Please.

We don’t even hear much anymore about thoughts and prayers regarding the latest incident.  It’s as if we’ve all become inured to them.  That strategy never did work.  We have heard enhanced rhetoric about turning our schools into heavily armed prisons.  Is that really preferable to a “Bureau of Firearms Control?”

Yes, we must always remember those who died to defend our nation on Memorial Day, but think of our teachers and students who now face a war zone in schools.  We need to defend them from NRA’s agenda, cloaked in the sacred shroud of the 2nd amendment.  None of this takes away one’s right to bear arms, only military style weapons and makes other weapons subject to registration in the same way we regulate motor vehicles.

And here is a letter from the 4th grade Grandson of a friend of ours which he wrote to President Trump crying out for humane leadership.  Is there any better message this Memorial Day? 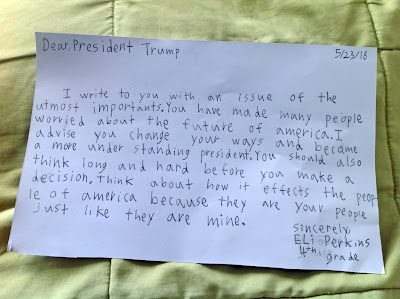