A Sport and a Pastime; A James Salter Masterpiece 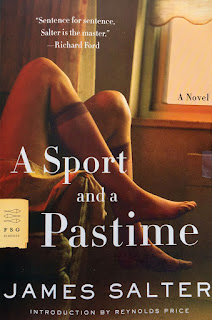 Salter chisels precise sentences, ones Hemingway himself would envy.  And there are flashes of Fitzgerald as well, colorful and lyrical.  It’s long been said that Salter is a writer’s writer and in A Sport and a Pastime (“Remember that the life of this world is but a sport and a pastime…” from The Koran) he spins the tale of three people, one the narrator, and then the story of the 24 year old Philip Dean and his young lover, an 18 year old French shop girl, Anne-Marie.  We follow their pleasures of eating, abandoned sex, motoring about the French countryside, from hotel to hotel and restaurant to restaurant, all related through the imagination and recollection of our voyeur narrator.  Sexually, every major position from the Kama Sutra is explicitly explored and yet the novel is not pornographic, Salter weaving eroticism into his panoply of French provincial images and the strange relationship of the narrator to the two main characters.

The narrator warns the reader that his tale is as much fabricated as it is real.  What is real and imagined is left to the reader.  We know little about the unnamed narrator who is staying at his friends’ country home in Autun, France (the Wheatlands, who live in Paris) as he has done many times before.  It is here that he befriends Dean.  He is fond of the French countryside and he imagines a love interest in a woman there, Claude, who he only glimpses from afar.  He fantasizes about her and here is the genius of Salter who skillfully foreshadows the narrator’s interest in Dean and Anne-Marie.  Salter’s writing is exquisite:

I have discarded my identity. I am still at large, free of my old self until the first encounters, and now I imagine, very clearly, meeting Claude Picquet. For a moment I have the sure premonition I am about to, that I am really going to see her at the next corner and, made confident by the cognacs, begin quite naturally to talk. We walk along together. I watch her closely as she speaks. I can tell she is interested in me, I am circling her like a shark. Suddenly I realize: it will be her. Yes, I'm sure of it. I'm going to meet her. Of course, I'm a little drunk, a little reckless, and in an amiable condition that lets me see myself destined as her lover, cutting into her life with perfect ease. I've noticed you passing in the street many times, I tell her. Yes? She pretends that surprises her. Do you know the Wheatlands, I ask. The Wheatlands? Monsieur and Madame Wheatland, I say. Ah, oui. Well, I tell her, I'm staying in their house. What comes next? I don't know-it will be easy once I am actually talking to her. I want her to come and see it, of course. I want to hear the door close behind her. She stands over by the window. She's not afraid to turn her back to me, to let me move close. I am going to just touch her lightly on the arm … Claude … She looks at me and smiles.

Ultimately, his inner life becomes consumed by his thoughts and observations of Dean and Anne-Marie, Salter making the point that memory is not a photograph but a construct:

Certain things I remember exactly as they were. They are merely discolored a bit by time, like coins in the pocket of a forgotten suit. Most of the details, though, have long since been transformed or rearranged to bring others of them forward. Some, in fact, are obviously counterfeit; they are no less important. One alters the past to form the future. But there is a real significance to the pattern which finally appears, which resists all further change. In fact, there is the danger that if I continue to try, the whole concert of events will begin to fall apart in my hands like old newspaper, I can't bear to think of that. The myriad past, it enters us and disappears. Except that within it, somewhere, like diamonds, exist the fragments that refuse to be consumed. Sifting through, if one dares, and collecting them, one discovers the true design.

The narrator is awed by Dean, knowing he can never experience his ease in matters of love and profligacy:

I am only the servant of life. He is an inhabitant. And above all, I cannot confront him. I cannot even imagine such a thing. The reason is simple: I am afraid of him, of all men who are successful in love. That is the source of his power.

This is eerily similar in its conceit to Salter’s last novel, All that Is. Its main character, Bowman, tries to imagine the sexual life of a person he once admired, Kimmel, and goes on to try to recreate that life for himself.

Dean subsists on money from his father.  He is a Yale drop out.  He knows that it will end but meanwhile this intense relationship with Ann-Marie blocks out all light about choices and planning for the future.  Dean is a blind man to it all.  Is it no wonder our narrator ruminates:

Now, at twenty-four, he has come to the time of choice. I know quite well how all that is. And then, I read his letters. His father writes to him in the most beautiful, educated hand, the born hand of a copyist. Admonitions to confront life, to think a little more seriously about this or that. I could have laughed. Words that meant nothing to him. He has already set out on a dazzling voyage which is more like an illness, becoming ever more distant, more legendary. His life will be filled with those daring impulses which cause him to disappear and next be heard of in Dublin, in Veracruz… I am not telling the truth about Dean, I am inventing him. I am creating him out of my own inadequacies, you must always remember that.

After a while, the second phase begins: the time of few choices. Uncertainties, strange fears of the past. Finally, of course, comes the third phase, the closing, and one must begin shutting out the world as if by panels because the strength to consider everything in all its shattering diversity is gone and the shape of life-but he will be in a poet's grave by then-finally appears, like a drop about to fall.

Dean doesn't quite understand this yet. It doesn't mean anything in particular to him. He is, after all, not discontented. Her breasts are hard. Her cunt is sopping. He fucks her gracefully, impelled by pure joy. He arches up to see her and to look at his prick plunging in, his balls tight beneath it. Mythology has accepted him, images he cannot really believe in, images brief as dreams. The sweat rolls down his arms. He tumbles into the damp leaves of love, he rises clean as air. There is nothing about her he does not adore. When they are finished, she lies quiet and limp, exhausted by it all. She has become entirely his, and they lie like drunkards, their bare limbs crossed. In the cold distance the bells begin, filling the darkness, clear as psalms.

We all know how this must end, much like Dean’s rare sports car, a Delage, one he abandons, which immediately atrophies with Dean’s departure.  I think of Dean as a Gatsby and the narrator as his Nick Carraway.  Perhaps this is intended all along by Salter, his hat tip to Fitzgerald…

We are all at his mercy. We are subject to his friendship, his love. It is the principles of his world to which we respond, which we seek to find in ourselves. It is his power which I cannot even identify, which is flickering, sometimes present and sometimes not – without it he is empty, a body without breath, as ordinary as my own reflection in the mirror – it is this power which guarantees his existence, even afterwards, even when he is gone.

Although Salter wrote six novels as well as a number of screenplays, A Sport and a Pastime, Light Years, and All that Is are probably his finest.  All that Is was published only two years before his death at the age of 90. His first novel, which I have on my shelf to read is considered a masterpiece of war-time aviation fiction, The Hunters published in 1956 (Salter was a West Point graduate and a jet pilot during the Korean conflict, a remarkable background for a writer of his stature).  That is a span of 57 years during which he wrote his few novels.  His output was not great, but his writing is.