The last time I faced a really serious health problem was sudden open heart surgery.  It was a 15 day ordeal in the hospital, with excessive bleeding and intubation complications causing the long stay and a difficult recovery.  But eventually I got back on the proverbial horse and have been happily riding the trails of life again.

My heart problems are not only those of the “plumbing” variety but electrical as well. As a 54 year old I had to have a pacemaker implanted as my heart was beating only 30 BPM, even though I was going through my usual day at work, driving, etc.  I noted I couldn’t climb a flight of stairs without becoming breathless.  My doctor couldn’t believe I made it through the day without passing out and I was checked into the emergency room.

They suspected an advance case of Lyme disease, which can affect the heart’s electrical system, so I was placed on high dose antibiotics to see whether that would solve the problem.  It did not so a week later a pacemaker was implanted.  That was twenty years ago.  During that period I’ve had the pacemaker replaced two times and the battery on this, the third, is now running down so I thought I would soon be getting my fourth.  Not a big deal swapping pacemakers.  This time around though I was told that the leads implanted 20 years ago were beginning to fail and, now, I am 100% dependent on the pacemaker and have no residual 30 BPM in the bucket.  My life literally hangs by wires connected to a minicomputer under my skin, and a battery.

This is a much more delicate operation, my most serious one since open heart surgery.  Normally this procedure does not involve the invasive opening for bypass surgery, but if anything goes wrong, it could, something I was told I would not “tolerate well.” Nonetheless, I must have a lead extraction; no choice here.

Rather than going into the details of such an operation, this is a good site if anyone is interested.   The procedure can take up to six hours.

I’ll be going to a leading specialist for such operations, Dr. Roger Carrillo at the University of Miami hospital. So, again, I’m in the hands of a skilled physician at a critical health impasse.  It’s hard not to feel a sense of anxiety, recalling Bette Davis’ comment “growing old isn’t for sissies.”  It is reassuring though to be in good hands, and to have the support of friends and family, and, particularly, my wife, Ann.

I like the early mornings so I leave this entry with pictures of the recent Hunter’s Moon setting down our waterway and the sun rising over the golf course where I walk most mornings. 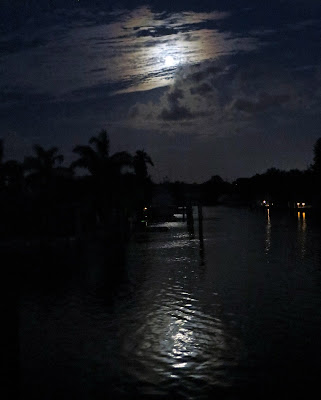 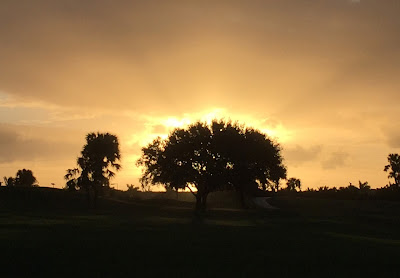