Last night there was lots of hubbub at the Class A+ ballgame in Jupiter, the Hammerheads playing the Charlotte Stone Crabs, as Christian Yelich from the Miami Marlins who’s been on their DL was making a rehab appearance.  As an established major league player he drew much attention, some of the crowd not remembering he played for the Hammerheads only a few years.  When I saw him as a minor leaguer one could see the potential.  He reminded me of Jacoby Ellsbury, then with the Red Sox and now with the Yankees.  He has that lanky look, a quick left-handed bat, and speed around the bases.  He went 2 for 4 in the Hammerheads 3-2 loss to the Crabs, a double and a single – stealing 2nd base and going around to 3rd on a throwing error.  He flew.  I guess he’s ready to go off the DL 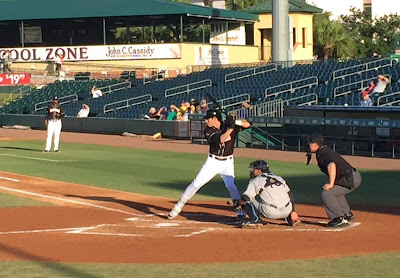 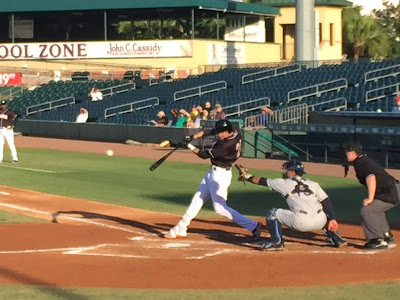 A couple of other interesting items  The Hammerheads started a lefty, Alex Burgos who seemed to have ordinary stuff, went three innings, gave up four hits but no runs and had no BB or SOs.  What I found interesting is that he was born in Regensburg, Germany, a beautiful city that we’ve been to on the Rhine. (Not many BB players can claim that distinction.) He played his college baseball here in Florida though. He’s knocked around the minors for five years now, and he’s going to have to develop some finesse pitches with pinpoint placement to make up for his lack of an overpowering fast ball. 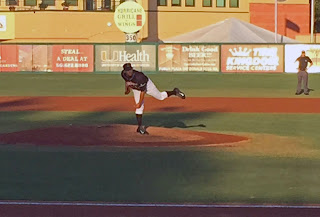 On the other side of the coin, Esmerling De La Rosa, the losing pitcher (gave up one run in two innings, but with two SOs), was bringing heat at 95 mph, and although he has had control issues in the minors, he seems to be improving.  It helps to be able to throw in the mid 90s.  So, who knows, maybe one of these guys will make it to the majors, but there is work to be done! 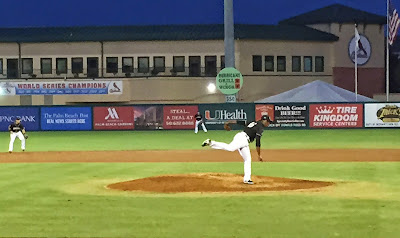 I should add that Buddy Borden, who pitched for the Crabs (Tampa Bay affiliate), threw like a mature pitcher although only 23 years old, fast ball in the low 90s, a good curve ball, moving the ball around.  He gave up one run in five innings and thus far this year has shown great control with only 5 walks and 21 strikeouts in 21 innings.  Looks like Tampa might have a future starter.