The House I Live In


I’ve written several pieces over the years about Memorial Day, a day of remembrance of the men and women who have given their very lives to preserve the democracy envisioned by our founding forefathers.  Too often we take this day for granted and I have a visceral abhorrence of making this day one of “Memorial Day sales.” 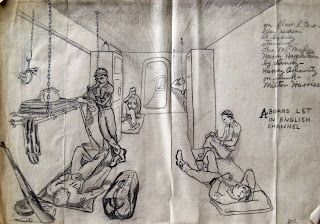 Although my father did not die when he fought in WW II, he reluctantly talked about buddies who did.  I cannot help but think of him on this day and Veterans Day, just an average “Joe” who found himself in the maelstrom of the times, and did his best transitioning from a civilian to becoming a member of the armed forces, stationed in Europe until he returned home in 1945.

Those were different times from the shadow wars of terrorism we live with today..  The entire nation was drawn into the war.  Hollywood films of those years walked the fine line between propaganda and the literal truth.  I find myself drawn to them on Turner Classic Movies this weekend, just to get a sense of what my father and millions of men and women like him had to endure.  And what it was like on the home front.  I vaguely remember the days when my father was gone.  My great-grandmother would take me in my stroller to Jamaica Avenue to buy groceries.  There were no shopping malls, mega-stores.  Those were neighborhood stores and everyone knew your name.  My mother lived with her parents and her grandmother, waiting for the safe return of my father.  I don’t remember that day, but somehow I felt his absence.

I’ve taken many photographs of our flag over the years, having a 25 foot high flagpole in our own courtyard.  After 20 years the pulley wheel on top froze and I was no longer able to raise our flag.  The flagpole is too high for a ladder and I had to bring in a bucket truck to replace the pulley, this time with a revolving one so the flag can move more easily with the wind.  Coincidentally only days after repairing the flag pole there was a full moon.  I took this photograph, hoping to post it today. 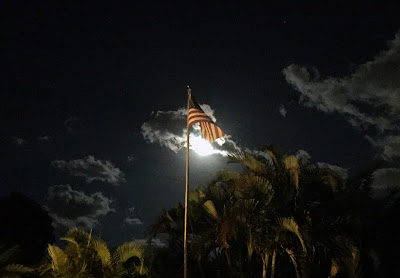 One of the movies made during the war was a 10 minute short, “The House I Live In” staring Frank Sinatra in which he sings the song of the same title.  It encapsulates those times and it is not a song one hears very often.  I made a home piano recording of it trying out a new recording device, the TASCAM DR-05, a step up from the one I’ve used before, but complicated to use.  Therefore, it is a work in progress.  Nonetheless I post it here, and the words to the song follow.

The House I Live In

What is America to me?


What is America to me?


The house I live in, a plot of earth, a street


The grocer and the butcher, and the people that I meet


The children in the playground, the faces that I see


All races and religions, that's America to me


The place I work in, the worker by my side


The little town or city where my people lived and died


The "howdy" and the handshake, the air of feeling free


And the right to speak my mind out, that's America to me


The things I see about me, the big things and the small


The little corner newsstand and the house a mile tall


The wedding in the churchyard, the laughter and the tears


The town I live in, the street, the house, the room


The pavement of the city, or a garden all in bloom


The church, the school, the clubhouse, the millions lights I see


But especially the people


That's America to me