I've written about my old "home town" before. I lived in downtown Brooklyn and in Park Slope for almost eight years before moving to Manhattan and finally Connecticut. But Brooklyn was a special 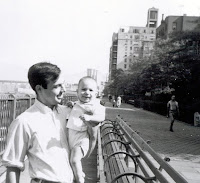 place for me, where I went to college, met my first wife, and had a son. To the right is a picture of Chris and me on the Brooklyn Heights Promenade in 1965.

So it was no wonder I picked up the novel Brooklyn by the Irish novelist, Colm Tóibín. It is a coming of age novel about a young Irish woman, Eilis Lacey, who immigrates to the US soon after WW II, settling in Brooklyn -- in fact near Fulton Street where I lived. There are similarities to the work of Henry James, contrasting the old world to the new, and written by a man about a female protagonist -- a remarkable novel well worth reading. One cannot help but contrast Brooklyn to James' Portrait of a Lady. Eilis having to make choices of suitors as did Isabel Archer.

Eilis finds work in a department store on Fulton Street called Bartocci's, but it might as well have been the old Abraham & Straus also on Fulton Street. What Eilis is told by the bosses' daughter the first day of work embodies the essence of the American immigrant experience: "Brooklyn changes every day...New people arrive and they could be Jewish or Irish or Polish or even coloured. Our old customers are moving out to Long Island and we can't follow them, so we need new customers every week. We treat everyone the same. We welcome every single person who comes into this store. They all have money to spend...You give them a big Irish smile."

Eilis is the reluctant immigrant at first, being sent to America by her mother and sister so she could have a better life and employment which was then so difficult to find in Ireland. She knows no one there except a Priest who sponsors her. Eilis finally embraces the experience (falling, she thinks, in love with an Italian boy, never being quite sure) before she finds that she has to return to her home for a few weeks (don't want a spoiler in this brief synopsis so will leave it at that). Her old home in Ireland now seems foreign to her but over the weeks she begins to feel that she cannot leave (thinking she is now in love with someone else). It is now Brooklyn that is feeling foreign although she has put down deep emotional roots there.

The resolution is somewhat surprising but Eilis is constantly reinventing herself for whatever situation. One can imagine what it must have been like for an immigrant, especially a young woman, to make her way in a strange land after WW II. It can stand with Gish Jen’s novel about the Chinese immigrant, Typical American

Tóibín skillfully takes the reader on Eilis' journey, a truly unforgettable portrait and lovingly rendered by the author.
Posted by Bob at 12:52 PM