All My Sons at Dramaworks' New Home

Life imitating art, the American Dream laid threadbare, the relationship of fathers and sons, themes of individual responsibility to society, all resonate at the new home of Dramaworks, a complete remake of the old Cuillo Theatre on Clematis Street in West Palm Beach, renamed the Don & Ann Brown Theatre. All the credit for maintaining the high quality of Dramaworks' offerings goes to the founders, the Producing Artistic Director, William Hayes, the Managing Director, Sue Ellen Beryl and the Company Manager, Nanique Gheridian. Their vision, dedication, and no doubt huge sacrifices during the formative years of Dramaworks is what gave birth to what is, today, one of the leading regional theatres in the country. Their winning formula, while extremely difficult to execute so professionally, is to focus on classic, award-winning plays, and produce them on a level on par with Broadway or the West End. 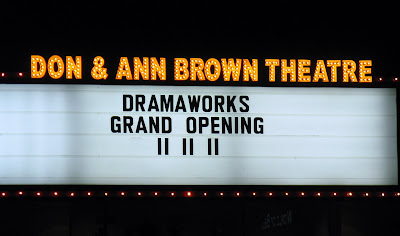 We were fortunate enough to have tickets to attend opening night, the first production in the beautifully renovated theatre, now seating 218 vs. the 84 in Dramaworks' theatre on Banyan Street. It was a special moment to be there for the opening, and attend the celebratory reception afterwards with crew and cast. It was reminiscent of the time we attended the Academy Awards and were guests of the Academy when I published The Annual Motion Picture Credits Database.

In designing the new theatre, a special effort was made by Dramaworks to retain the intimacy of 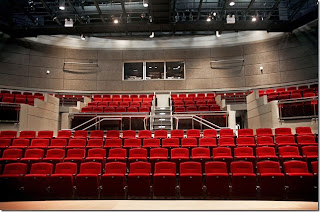 the old theatre, still bringing the audience into the production in a visceral way.

In the case of their first play, Arthur Miller's All My Sons, Dramaworks could not have chosen a more appropriate offering, for our times and for their new theatre. The production demands of this play, in particular with its larger cast and two story set, would have been impossible in Dramaworks' former home, both technically and financially.

Furthermore, one cannot help but think of the numerous parallels to real life situations such as the Madoff scandal leaving the family with the shame brought on by the father, or the ignored cries of the helpless Kitty Genovese who was murdered in the neighborhood where I grew up, or the most recent failure of assuming individual responsibility in the Penn State debacle. These themes are played out in life and in art. No doubt Madoff, in the process of destroying countless individuals, thought, as Joe Keller, that he was doing something "for family and for his sons," thus justifying his actions. And how do ordinary citizens become bystanders while their neighbor is being murdered or a child sexually assaulted? Miller deals with similar issues in a play written decades before.

Miller once said "The American Dream is the largely unacknowledged screen in front of which all American writing plays itself out," and what is more American than dreaming of riches and the so called "good life." Some men kill for that, some do it with Ponzi schemes and others with defective parts sold to the government at huge profits which cost American servicemen their lives. Or to paraphrase Balzac, "behind every great fortune lies a great crime."

And part of the "Dream" is living with illusions that try to make life more bearable. The mother, Kate, voices this facet of the play believing that her son, Larry, is still alive and will miraculously return home three and a half years after the war has ended. When Ann Deever, the daughter of Joe Keller's former partner who is now in prison, paying for a crime Joe is also guilty of, questions why Kate still believes that Larry is alive, she answers: "Because certain things have to be, and certain things can never be. Like the sun has to rise, it has to be. That’s why there’s God. Otherwise anything could happen. But there’s God, so certain things can never happen." The drama heightens to the inevitable converging lines of fantasy and reality, when Kate admonishes her other son, Chris: "Your brother’s alive, darling, because if he’s dead, your father killed him. Do you understand me now? As long as you live, that boy is alive. God does not let a son be killed by his father."

Dramaworks' production powerfully captures Miller's modern telling of the elements of a Greek tragedy, characters making choices that lead to their own downfall, leaving the audience feeling pity on the one hand and fearing this could be any person, including themselves or their own neighbor. My wife, Ann, was surprised that she didn't cry at the ending but instead we both felt as if we had a blow to our solar plexus. The acting, directing, every element was close to perfection.

All My Sons has the largest cast we've ever seen in a Dramaworks production, ten highly capable actors, some of whom are Dramaworks veterans. All were excellent, but the especially heavy lifting was done by Kenneth Tigar (Joe Keller), Jim Ballard (Chris Keller), Elizabeth Dimon (Kate Keller), and Kersti Bryan (Ann Deever). Their performances were amazing, physical and emotional, resonating with the full force of Miller's words. One wonders how these actors can sustain such emotional levels and then do it again the next day!

The production was directed by another Dramaworks veteran, J. Barry Lewis. Lewis used the larger stage, as well as the lighting and the set, to bring out the best in his actors. I would imagine if Arthur Miller was sitting next to us he would have turned and said," this is precisely what I had envisioned."

The meticulous stage settings which have characterized Dramaworks' past productions, endures now on a larger scale -- a much larger scale in fact, a two story house on stage and its backyard -- thanks to the scenic design of Michael Amico. We felt as if we were sitting in the backyard of Anywhere, Midwest, USA. When the play opens the audience is drawn to a fallen tree, one that was planted in memory of the Keller's son, Larry, which now lies toppled by a storm in the night, a symbol of another encroaching storm that culminates in the powerful dramatic resolution. The scenic architecture perfectly connects the audience to the play, the same kind of intimacy that characterized Dramaworks' productions in their former venue.

Congratulations Dramaworks, the crew and cast, and best wishes to you all in your new home.
. 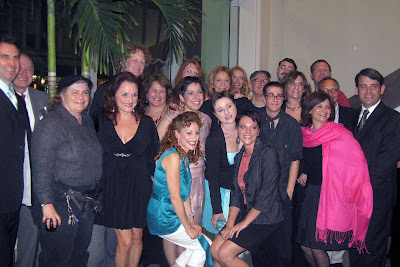