I met Ron in 1985 when my company acquired a publishing company of which he was the editor-in-chief. During the due diligence he looked me in the eye, shook my hand, and introduced himself. He didn’t fit the stereotype of a scholarly/professional editor and later I learned why. Although he had the requisite academic training as a graduate of William and Mary and was a student of military history, particularly the Civil War period, he was also an ex-marine, and served in the Vietnam conflict. He was extremely personable, while his demeanor was all business.

In addition to being colleagues, we became friends, and later in his career he left our company to lead the Naval Institute Press, an ideal position that combined his professional expertise as well as his passion for military history. He ultimately retired from that job and we remain friends to this day.

During company picnics Ron and I would “throw the pill” around before the requisite softball game. We both played baseball in our youths, we’re both lefties, and, we would like to think we can still throw a ball as we did in the “old days.” But now in retirement, he has been working on golf and he is a very good golfer. So good in fact, he was asked by a national golf magazine to serve as a consultant for a story about golf in Vietnam today as seen through the eyes of a U.S. veteran going back there to play. The Vietnam tourist agency wants to try to promote golf so they and the magazine supported the trip.

Ron accepted and recently returned from the assignment. Barbara, his significant other, met him there for part of the trip. I had sent Ron pictures of our recent southwest tour, which I wrote about in a prior blog entry. This is how Ron responded. It is such a remarkable, thoughtful document, with interesting observations about his trip to Vietnam, how America is now perceived there, that I include it below. Consider it a “guest blog entry:”

Enjoyed the photos of your trip. Your pictures are so well composed. The vibrant colors and magnificent landscapes/architecture of the SW were so alive. Lots of real postcards in the group. They brought back memories as my first job in publishing was a college traveler for Prentice-Hall based in Albuquerque. I drove most of the highways in NM, Eastern AZ, and West Texas. It was a fun job because out there and in those times professors were happy to talk to a salesman about books. They felt kind of cut off from mainstream academic American; and in their eyes, I represented the intellectual East. While this was certainly a misperception of me, I had great access to profs and sold lots of books.

I’m decompressing from my Vietnam trip. Vietnam is zooming down the market economy road (on their 80cc Hondas) with not a commie in sight! I had a wonderful trip on a number of levels (emotional, informational, etc.) and the golf courses I played were fabulous. While in Vietnam I celebrated my 65th in the same place I turned 25. Nice symmetry. Didn’t even think about Medicare! The magazine put me up in the most fabulous hotels (the Caravelle in Saigon where the journalists watched the fall of Saigon in ’75 from the rooftop bar, a former colonial French mansion/Emperor Bao Dai retreat in the 5,000 foot cool, alpine climate of Dalat, and a beautiful new beachside resort at the site of our old China Beach in country R&R spot near DaNang. Here I had a spectacular cottage right on the water. So there I was in a country where thousands of Americans died and hundreds of thousands of Vietnamese were killed; and, 40 years after the war, I’m playing golf!! And the Vietnamese like us and surprisingly bear no ill will towards Americans! So what was it all about? Nothing! Iraq, of course, will be the same. Those who believe the surge is working (or even ultimately relevant to the situation) need to review the history of the Vietnam War. We “surged” from 150,000 troops (same as Iraq) to 500,000 and it ultimately did no good. How quickly they forget.

I was able to spend some time in I Corps (around DaNang and Hue) and visit the places where I served. I even sat down in a village and talked with a former Viet Cong. His life has been tough because of Agent Orange but he was very polite. Once we determined that we were fighting each other in the same area at exactly the same time (Tet), a sort of bond developed between us. Over 70% of the population of Vietnam was born after the war and have no memory of it – only old farts like me and the VC! After the golf, Barbara came over and we spent a week touring places I never saw during the war e.g. Saigon, Hanoi, etc. Hanoi was terrific with lots of French Colonial architecture and large, beautiful lakes scattered throughout the city. Barbara and I ambled all through the old quarter of the city. We also took in a number of interesting and surprisingly good museums. Throughout the Barbara/Ron portion of the trip, we stayed in wonderful colonial hotels and ate in great restaurants with terrific food. You would have liked the hotel bars. In the evening they always had a pianist (accompanied variously by a saxophone, violin, singer) who played haunting “love and life” numbers from the 40s and 50s. The French influence in music still survives as many tunes were of the melancholy Charles Aznavour café type. It was quite nice, relaxing, and romantic. 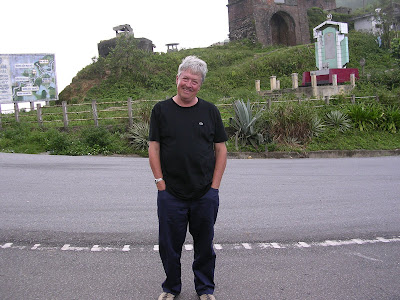 PS Attached is a picture of the old convoy commander at the top of the Hai Van pass on the road from DaNang to Hue – a route I ran many times. Notice the old French fortifications in the background. We always felt briefly safe when we got to this spot as it was manned by a platoon of marines.
Posted by Bob at 1:57 PM