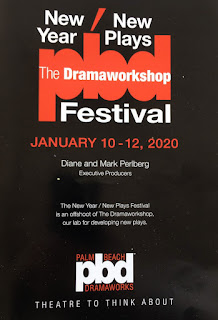 If our best regional theatres do not produce new plays, who will?  Certainly not Broadway which has gravitated toward revivals or spectaculars, taking a “chance” on new plays only after they have proven themselves elsewhere.  And if it’s a straight drama, Broadway seeks out Hollywood star power to attract audiences.

South Florida now has a relatively new proving ground for new play development, Palm Beach Dramaworks’ The Dramaworkshop, an incubation laboratory for submission, review, selection and then development of new plays, including readings by professional actors, first in a roundtable setting and then, ultimately, in front of a live audience.

Already three plays have emerged from this effort, Edgar and Emily, (March 2018), House on Fire (December, 2018), and this season’s enormously successful Ordinary Americans (now at the GableStage in Coral Gables). Edgar and Emily has been performed on Florida’s west coast and House on Fire was just published by Samuel French – the “official” publisher of established plays. 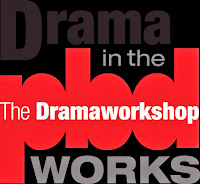 The Dramaworkshop and the soon to be inaugurated “Drama (in the) works” is managed by Dramaworks’ Bruce Linser who is not only passionately dedicated to their mission to develop new plays but is also a fine actor, director, singer and even pianist in his own right.  His outstanding performance in last season’s House of Blue Leaves is testament to his talent.

In addition, the New Plays Festival has top-drawer South Florida actors to read the parts, all members of Actors Equity, most of whom we’ve seen many times at previous Dramaworks productions.  Their versatility and talent know no bounds.  The success of these readings is as much their doing as the plays themselves.  Imagine having only 16 hours of rehearsal to perform these works, albeit as readings, and still be able to reach down and find the emotion and the meaning meant by the playwright.  I list these luminaries in their order of their appearance in the five plays:  Margery Lowe, Bruce Linser, Tom Wahl, Dennis Creaghan, Michael McKeever, Matthew Korinko, Nicholas Richberg, Rob Donohoe, Laura Turnbull, James Danford, Elizabeth Dimon, Bruce Linser (yes, again!), Irene Adjan, Kim Cozort Kay, Angie Radosh, Kenneth Kay, and Patti Gardner.  It’s like a who’s who of leading South Florida performers.

So it was with great anticipation that Dramaworks kicked off their New Year/New Plays Festival last Friday.  Two plays were read on that day, the first, one that is probably the furthest along in development as it has already been scheduled for the main stage next season, was The People Downstairs by Michael McKeever, a play that was commissioned by Dramaworks.  The play’s premise is a simple but profound one.  While Anne Frank and seven others were hidden in four small rooms concealed behind a bookcase in the factory building where her father worked, who were the brave people who kept Frank and others alive in that small space for such a long time?  How did they feel, did they fear for their own lives, all while providing solace and supplies to the occupants?  Their moral stance and the consequences of their actions are explored.

After a dinner break, the evening’s performance was Padraic Lillis’ Remember Me When You Come Into Your Kingdom, a play that is to me reminiscent (but totally original) of two other plays Red by John Logan and Peter Shaffer’s Amadeus, in that Red deals with a famous painter and his assistant and Amadeus’ Salieri suffers from knowing that his work pales compared to his contemporary, Mozart.  Similar issues arise in Remember Me as Giovanni Montorfano, a third-generation artist, has been commissioned to paint the Crucifixion, a fresco which will face another commission, Leonardo da Vinci’s “The Last Supper.” Montorfano is proud of his own “reliability” compared to da Vinci’s tendency to study issues such as light and perspective and therefore thinking he’s “all talk and no art.”  But, like Salieri, it is an exploration of “mediocrity.”  And the fear that immortality will allude him.

Saturday’s festivities were kicked off by a roundtable discussion during the Playwrights Forum: a Discussion with the Festival’s Five Dramatists.  Here the audience could hear first-hand how these dramatists work, their own individual writing processes, and what they had hoped to achieve in their plays.  Also, macro issues such as the growth, or even the survival, of live theatre in today’s media obsessed, Internet world were discussed.  It was also an opportunity to put a face to each of the plays being performed.  As in the case of the plays, there was an audience talk back afterwards, an easy give and take with warm feelings.

After a brief break, John W. Lowell’s The Standby Lear, another two hander but set in contemporary times was performed.  Here an actor and his wife (a recently retired actor) show the well trodden paths of their decades of marriage in clever, funny but poignant repartee.  The husband, who is an understudy for one of the greatest parts in the theatre, King Lear, suddenly finds himself, after three months of not having to perform, tormenting himself with thinking he might actually have to step into Lear’s costume that night.  Mortified by fear, he flees but soon returns to the support of his wife, Anna.  And so in essence, does he play the role and why does he have all the angst he feels?

Saturday night’s reading was As I See It by Jenny Connell Davis.  This is grounded in a real life experience, with deep dive research on the part of the playwright to capture the stories of the painter Alice Neel and poet Frank O'Hara, who was also curator for MoMA in the 1960s.  It too is a classic two hander of the testing of wills between these creative individuals.  From an amusing beginning it develops into an imagined confrontation.  Are her portraits “a collection of souls?” Weighty philosophical issues such as immortality through Art are examined and the crux of the play lies in Alice painting with the perception “I paint what I see.”

Sunday began with a pleasurable “Lunch with the Artists” hosted at Leila’s in West Palm Beach where we all had the opportunity to lunch and talk with the individual playwrights.  They and the actors who bring their work to life are among the brightest and most engaging people I’ve ever met and in my career as a publisher I met thousands of authors, but they were all writing nonfiction scholarly or reference works.  The Drama World brings out passionate imagination with the knowledge of human nature.

The final play was a reading of The Hat Box by Eric Coble.  This has the earmarks of a Simonesque comedy, with the requisite dramatic moments and character development.  Family stories frequently involve secrets and Coble drills down to them through comic interaction.  Two sisters are clearing out a closet in their childhood home after their father’s death, finding a hat box the contents of which sets them on a sleuthing challenge, bringing in another family member and a friend of her father’s only to learn that there was more to dear old dad than they imagined!  And in trying to unravel a mystery in his past, the estranged sisters find a new path to each other.  “With surprising twists and hilarious turns, this comedy of family lore revels in the bizarre and beautiful mysteries that make up a life.”

After a talk back on that play, everyone gathered in the lobby where a champagne toast was made by Bruce Linser to the playwrights, the cast, and the audience and, there, William Hayes, the Producing Artistic Director, announced that it was Dramaworks’ intention to produce at least one new play each season on the main stage.  The People Downstairs has already been scheduled for next season, but which of the other four will follow from this enormously successful Festival is anyone’s guess. Each had merit in its own way.  Kudos to Dramaworks for developing new plays to think about. 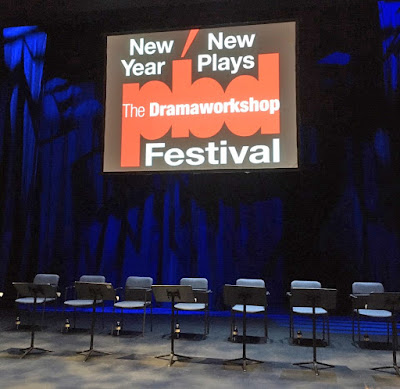