Palm Beach Dramaworks’ co-production with GableStage of Joseph McDonough’s Ordinary Americans recently made its triumphant World Premiere on the Dramaworks’ stage.  This stirring new play peels away to the truth of what it means to be human and to be vulnerable to political polarization, demagoguery and anti-Semitism.  The Dramaworks production and playwright Joseph McDonough’s insightful script touches us all, especially today.  The 1950s may have been “the placid decade,” but underneath all the apparent innocence of the times American politics and ethnic relations were as fractious as they are now.

It is an ironic title as the characters in this play were anything but ordinary, especially our protagonist, Gertrude “Tillie” Berg who brilliantly and single handedly conceived, wrote, and starred in The Goldbergs, first on radio and then TV for more than two decades.  Her extraordinary accomplishments, as a woman, and a Jew, particularly in a man’s world echo throughout the play.  Yet she, her colleagues, especially Philip Loeb, fell victim to McCarthyism.  The play resonates with the feeling that the ghost of Roy Cohn still stalks the land. 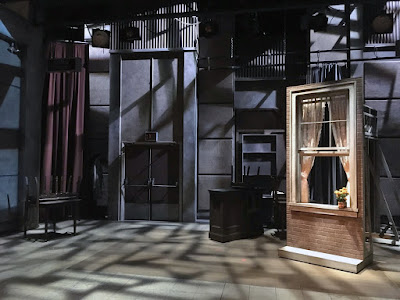 Ordinary Americans is performed on a nearly barren stage, serving a multiplicity of scenes in different places, the audience basically having to fill in for the presentational nature of Michael Amico’s scenic design.  It is the logical platform for those scene changes, fluidly balancing the play’s highly dramatic moments and humor to underscore its serious themes.

It is a memory play, opening with a scene in a diner in Ohio (circa 1958), the I Love Lucy program on the diner’s TV, quickly transitioning to the NBC studios in NYC in 1950.  There stands the indefatigable Gertrude Berg, playing her spiritual doppelgänger, Molly Goldberg, surrounded by her TV cast in spotlighted tableau, her husband, “Jake Goldberg” (played by David Kwiat as Philip Loeb), and “Uncle David” (played by Rob Donohoe as Eli Mintz), as well as her lifetime assistant Fannie Merrill (played by Margery Lowe), and TV Production Manager for the show Walter Hart (played by Tom Wahl).  All are PBD veterans except David Kwiat who is making his PBD debut.  This dramatic “snapshot” of the major characters truly sets the stage for the story they will tell.

Elizabeth Dimon’s performance as Gertrude Berg is so graceful that we forget we are watching a consummate artist at work.  While radiating genuine warmth as The Goldbergs creator and star, Dimon’s “Tillie” does not suffer fools when crossed.  Yet, like her creation Molly, she too has a heart of gold.  Her TV family is her family.  In fact, at times she wonders “what would Molly do in this situation?”  Or “sometimes I think Molly is a better me than me.”  It is a difficult role to execute, a bifurcated person, yet Dimon believably conjures both Tillie and Molly’s kindness and humor.  If one wonders how Dimon can play this part with such heart and soul, it’s because the play was originally her idea as well as her dream role.  She’s been with the play since its inception and a couple of years of workshopping it at PBD.  A perfect fit for such a seasoned actor.

Dimon shows the other side of her character, an increasing frustration, especially in a maddening chaotic scene in her imagination of her being surrounded by potential advertisers or networks, screaming at her, multiple voices simultaneously.  Dimon slowly comes to the conclusion that her Tillie is at the end of her rope yelling “PLEASE LISTEN TO ME!” And then finally having to admit to herself that it’s “the first time in my life I feel helpless.”

While Tillie is the creative engine of the The Goldbergs program, and clearly the master of her fate, she is surrounded by people dependent on her for their employment.  At the top of the list is Philip Loeb, who David Kwiat deftly portrays as the perpetual optimist, an advocate for just causes, such as Actors Equity.  It is he who has to cope with the consequences of being on the infamous John Birch Society sponsored pamphlet of 151 artists and broadcasters entitled “Red Fascists and their Sympathizers,” otherwise known as “the Red Channels list.” (Tillie observes that the way they define “communist” is “anyone they don’t agree with, union organizers, activists, artists” and especially Jews.)

Kwiat is the ideal Philip, always hoping for the best, for himself, his colleagues and his son who needs institutional help.  He skillfully portrays Philip as a man suffering increasing desperation; his world falling apart under appalling injustice.  Kwiat’s final scene in front of the House Un-American Activities Committee is powerful as well as heartbreakingly pitiful, as he finally cries out, “Leave me alone…I’m a citizen and a human being.  You can’t take these away from me.”  It is a brave performance.  You will not forget his exit near the play’s end.

Tillie’s right hand gal, Fannie, is effectively played by the PBD veteran Margery Lowe, along with another minor role as “Mrs. Kramer” in The Goldbergs show itself.  Lowe, who is the accomplished professional having appeared in a number of PBD productions over the past, again comes through in these important supporting two roles, the efficient, buoyantly supporting Fannie, and her brief moments at a window as Mrs. Kramer, bellowing out “Yoo-Hoo, Mrs. Goldberg!”

Another long-time PBD veteran, Rob Donohoe, plays a number of roles, showcasing his versatility.  As Eli Mintz he is “Uncle David” in the show, adding humor and Greek chorus support in the background, Yiddish accent and all.  Eli Mintz is the play’s Cassandra; always thinking the “Red List” will metastasize into something serious for the show (he was right of course).  His interaction with Philip in particular is filled with much needed humor and affection for his colleague.

His portrayal of Cardinal Spellman is purposely pedantic, which speaks to Tillie’s private admonishment of the man, “All politician, no clergy.”  He’s also the voice of the grand inquisitor, a Senator from the House Un-American Activities Committee bellowing out at Philip with eerie “witch hunt” hysteria assisted by David Thomas’ sound design (more on that later).

He has a brief hilarious role as the diner owner in Dayton Ohio, fumbling his words, touting chicken salad as his special, and pretending to know the play, The Matchmaker by Thornton Wilder, which Tillie has come to Dayton late in her career to play, her television show now an apparition of the past.

PBD veteran Tom Wahl is a jack of all trades in this show, playing a number of roles, not an easy task to differentiate them all, but succeeds amazingly.  First and foremost, he is Walter Hart, The Goldbergs Production Manager on the set, played with exasperation on making deadlines, clipboard in hand.  He also plays other key roles: as Roger Addington, the General Foods executive who first brings the “Red Channels List” to Tillie’s attention, requesting that Philip Loeb, whose name is on the list, be removed from the show, but backing down as Tillie responds: “no one tells Gertrude Berg to fire anyone.”  While Addington takes her no as a temporary answer, he warns Tillie worse is to come.

As Frank Stanton, the President of CBS, Wahl expresses empathy yet the firmness which earned Stanton’s reputation at CBS as being a “son of a bitch.”  It is an affecting scene, Stanton and Tillie, Stanton demanding that Tillie fire Philip Loeb, and Tillie refusing, yet again.  Wahl walks that fine line evoking some audience sympathy for the character trying to cajole Tillie (“We’re survivors in this business.”).  The stalemate ends in the cancellation of the show.

Wahl plays still another “one of those men in suits”.­­ a young ad executive, who Molly hopes will help find a sponsor for her reconstituted show which has been off the air for a year (now without Philip as her husband and set in the suburbs of all places).  Wahl’s ad man recounts the facts:  “It’s 1955. Nobody has ethnicity anymore…Celebrate the Unity….People want to see ordinary Americans…Molly Goldberg had a good run. Let her rest in peace.”  And while sensitively delivered by Wahl, Tillie now stands alone finally mouthing the plaintive line, so achingly delivered by Dimon, “Molly, Goodbye Molly.”

There are many seamless scene transitions in this memory play and this is where the excellence of Director Bill Hayes and his technical crew shine.  Where actors need to be with split second timing is a key to the play’s success and this work is generally invisible to the audience, without curtains being drawn.  It leads to lively pacing, and Hayes knows when actors should slow their pace, or even pause, to let the play’s funny moments land securely.

Lighting is critical in this play, such as, the subtle flickering of lights when a TV showing The Milton Berle or I Love Lucy shows is on the restaurant or bar, or the sudden burst of full lighting when cutting to the studio scenes.  Or most effectively (and affecting) the lighting during the Hearings, Philip Loeb in a solitary spot, alone on stage except for Tillie watching from her memory in the shadows, and then during the news report of Philip Loeb’s suicide, the lights slowing coming up in muted yellow bathing the audience itself, as if we’re part of the same story today.  PBD newcomer Christina Watanabe’s lighting design is remarkable.

Sound design is usually important for mood and background, but takes on another level of importance in this show.  It of course has the requisite musical interludes, especially different takes on the music that was associated with The Goldbergs, Toselli’s gentle waltz, “Italian Serenade.”  Sound designer David Thomas also had the challenge of delivering lines from the play, electronically enhanced echoed questions being thrown to Philip Loeb during the Hearings, and the cacophony of news headlines crying out about McCarthy’s accusations, teletype clacking in the background, and haunting sounds in Tillie’s mind.

PBD resident costume designer, Brian O’Keefe, cleverly decided to go with red, white and blue palettes against the barren stage, in particular Tillie’s red dress with a wide satin collar and pearls, a jacket to delineate important meetings.  Of course, TV Molly became easily identifiable with her added white apron as a “typical” housewife of her time.  Fannie was normally dressed in dark blue while the men wore subdued grays, all outfits mid fifties perfect.

This is an important play, constantly underscoring themes that are so significant and germane to our current, often stressful, times.  Joseph McDonough’s Ordinary Americans joins the canon of classic plays honorably based on aspects of our own dark American history, ones that remind us to heed our past. 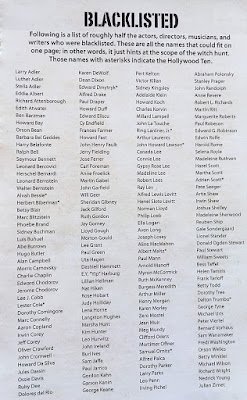