We recently returned from a week in NYC, a whirlwind revisit of our old stomping grounds, cramming in too much for a single blog entry.  Thus, this one focuses on the five Broadway shows we saw while there.  I could write detailed reviews of each, but Broadway is well reviewed and doesn’t need my help.  So this is a brief coverage of the shows we booked many months before the Tony Awards and even before three of them actually opened.   In other words, we took a chance on those – although we knew something about them in advance.  Call this write up an impressionistic review.

Before getting into the shows themselves, I must confess we were not fully prepared for the theatre district in the summer, although we’re both ex-New Yorkers and should know better.  The week before we left, every long term weather forecast had promised a week of ideal conditions, temperatures in the mid 80’s, moderate humidity.  Ah, we said in confidence as we packed to catch a Jet Blue flight to LaGuardia, lucky us.  But that following week morphed from idyllic into a scorching heat wave, one day reaching the mid 90s with high humidity.  And we left “cool” Florida for this?

As anyone who has lived in the city knows, if the air temperature is in the mid 90’s, the buildings and the macadam, the traffic, and the hordes of people, just magnifies the heat.  We were staying at 54th between Broadway and 8th Avenue and thought we’d be able to walk or Uber wherever we needed between the hotel, the shows, and restaurants.  More unrealistic thinking.  Traffic was at a standstill most of the time.  The only way to get to your destination was to walk.  Subways were impossible too.  And we walked mostly on 8th Avenue, frequently in the street as the sidewalks were so congested.  Because of the heat, the sidewalk vendors, the mobs of tourists and trash all over the place, the stench sometimes was insufferable.  But as ex New Yorkers we beat on to our destinations. 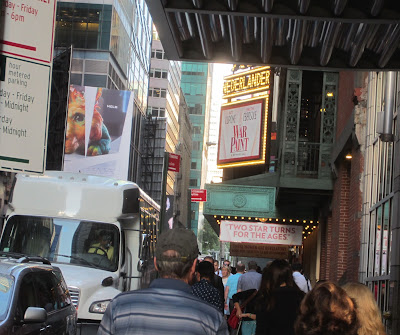 I’ll start with the least appealing show, although it was very entertaining, War Paint.  We bought tickets way before it opened and had front row seats and were showered by the spit of Patti LuPone and Christine Ebersole, whose presence alone was worth the price of admission.  When their contracts are up, War Paint will recede into Broadway history.  The music was agreeable but not memorable.  However, the costumes were fantastic as well as the scenic design by David Korins who designed Hamilton and two other shows running on Broadway now, Dear Evan Hansen, and Bandstand.  We were disappointed that there was little dance, unusual for a big Broadway show.  Personally, I also found the subject frivolous.  Do I care about cosmetics, although I get the point that these were two women battling in a man’s world.  Nonetheless it was a privilege to see two divas at work. 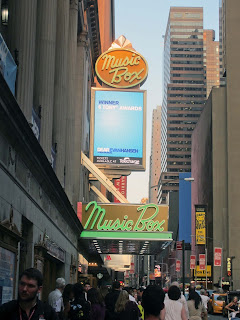 Dear Evan Hansen lived up to its hype, Ben Platt a unique performer who can sing beautifully while crying at the same time.  In fact, the audience was crammed with Ben Platt groupies.  A young lady sitting in front of us (her friend sitting two rows behind us so we were privileged to be in on some of their conversation before the show and during the intermission), was seeing the show for the 6th time, seats to this particular performance being a present from her mother on this, her 21st birthday.  She was at the end of her seat whenever Platt was on stage and singing, which is most of the time. The music moved the plot along and some beautiful songs, “Waving Through a Window,” sung by Evan and Company, “So Big/So Small” sung by Evan’s mother Heidi (Rachel Bay Jones) to name just two.  Both Jones and Platt won Tonys for their performances.  Steven Levenson wrote the book and the Music and Lyrics were by Benj Pasek and Justin Paul (who is from our old home town, Westport, CT).

As moving as the show was, it’s the first time Ann and I felt that this was a show for another generation (didn’t feel that way when we saw Lin-Manuel Miranda’s pre-Hamilton show, In the Heights in London which is hip hop multiculturalism). It’s not that we didn’t feel moved but the reality of how millennial families connect or are torn apart by social media is a major theme.  We understand but it’s not our world. 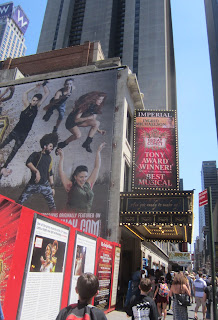 The Great Comet of 1812 was spectacular.  The Imperial Theatre was gutted for the staging, some of the audience sitting at tables, the action taking place all around.  Josh Grobin had just left the show.  Okierite Onaodowan who we saw in Hamilton is his replacement.  He did a credible job but I think Grobin’s voice might have worked better in the role.  But that is not to detract from the overall impression of the show, great music, phenomenal choreography – constant movement, and the kind of show only Broadway could put on in that form.  It leaves an indelible impression, in the same way Hamilton and Les Mis does. 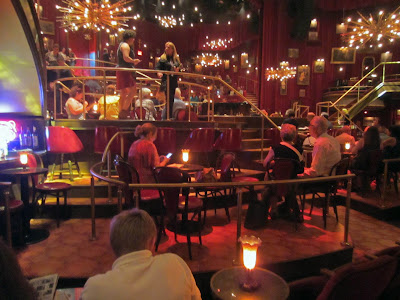 So much has been written about Josh Grobin that one would think his role playing Pierre was the primary one in the show.  It is not – it is more of a fulcrum.  The two dominant characters revolving around him are Natasha played by Denée Benton in her Broadway debut, who was nominated for a Tony, and Lucas Steele who plays the dashing womanizer, Anatole.  It is a large cast, with many outstanding performances. 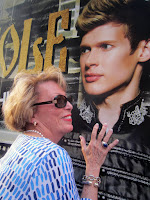 The music is infectious, rock at times, lyrical at other times (usually with a Cossack aspect), with an interesting back story as to how Dave Malloy who wrote the book, the music, and the lyrics came to envision the show: “I first read War and Peace while working on a cruise ship, playing piano in the show band, as a way for my landlocked girlfriend and I to stay connected. I remember being so enthralled by the scope of Tolstoy’s vision; the book was a trashy romance novel, a family drama, a hilarious farce, a military thriller, a philosophical scripture, a treatise on history, all wrapped into one giant, messy, nearly unmanageable tome. And then there was that section. Volume 2, Book 5. I think I read the whole 70-page slice in one sitting, staying up til 5 a.m. with the delirious obsession I usually reserved for Stephen King or Harry Potter. Up to this point, Natasha had been so mirthful and pure that her downfall seemed to come screaming out of nowhere . . . and then Pierre, his sudden righteous action, his heart finally alive, his simple kindness, the comet . . . it all happened so quickly. At the end of it, as I read the last words “into a new life” with tears streaming down my face, I had the weirdest and clearest epiphany: that this was the perfect story for a musical.”  His epiphany is our delight. 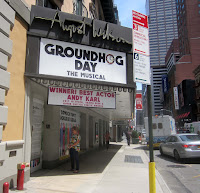 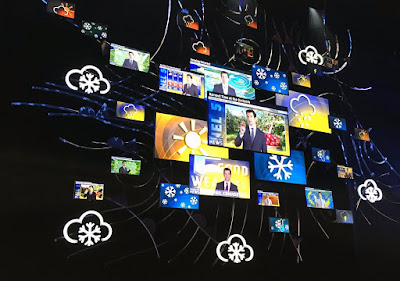 Groundhog Day was enjoyable, surprisingly faithful to the movie.  Very clever set designs and the infectiously likeable and talented Andy Karl who performed in spite of a torn ACL made the show. Great dancing too and the music was more than incidental.  I just didn’t see how that film could be turned into a musical, but it worked wonderfully.  Groundhog Day will become a traveling show one day.  Don’t miss it if you can’t get to NYC!

One disappointment was not being able see an equal number of dramas as well, but we took a chance on one of The Roundabout’s new plays which they developed with the Long Wharf in CT: Napoli, Brooklyn.  Long after we got tix it opened and the NYT had a so-so review.  It deserved a much better one.  Rarely have we seen characters so sharply drawn, memorable, except in some of the classic American plays. 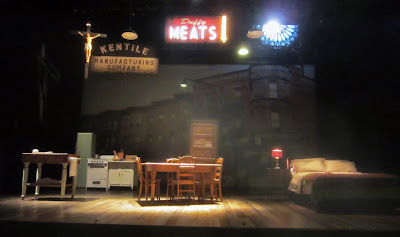 It is set in Brooklyn in 1960.  I was living there then and there is a horrific incident that takes place at the time (no further detail to avoid a spoiler).  It becomes a catalyst.  The play is about Italian immigrants, a man who arrives as a stowaway with his wife, and how they try to make a life in Brooklyn.  He’s a manual laborer and his wife bears him three daughters.  That’s strike one in the family, the father frustrated he has no sons.  His disappointment with life in the New World and his family is clear: “If we stayed in Italy we would have had a son.”

He’s not an O’Neill alcoholic father, but he is a workaholic and expects the same from his family.  He demands absolute obedience and is baffled by the way things devolved in his life. This leads to the conflict and the resolution.  The mother is trying to please everyone, her husband in particular, with her food and peacemaking efforts, the older daughter has sacrificed her youth for the benefit of the family, the middle daughter has to retreat to a Catholic convent after being attacked by the father, while the youngest, 16 years old, is trying to stowaway to Paris with another girl, daughter of an Irish immigrant, with whom she’s in love.  There is much more to the play than that -- it was riveting, a feminist spin on American family drama , written by Meghan Kennedy.  Remember that name.  Fantastic acting. 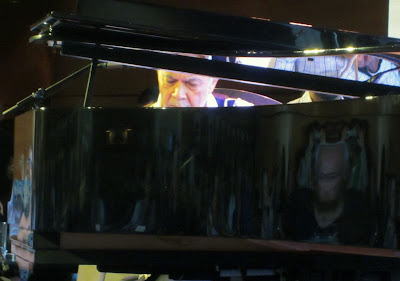 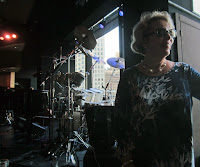 In addition to the 5 plays we caught our favorite jazz pianist at Dizzy’s Club Coca Cola, Monty Alexander (and his “Junkanoo Swing”), who takes swinging jazz and combines it with the rhythms of Jamaica.  His original composition, Hope reminded me of Oscar Peterson’s Canadian Suite, jazz compositions which have classical underpinnings, not improvisational jazz.  It was an ideal setting on the 5th Floor of the Time Warner building at 60th St, overlooking Columbus Circle, nearby our first apartment.  The view is as breathtaking as the music.

All in all, it was a magical week of theatre in Manhattan.  Hopefully, next year we can do it again! 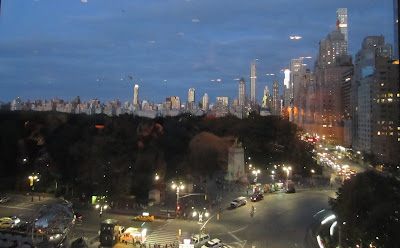 More about our NYC trip in the final portion of this entry here.