As American as apple pie.  But for us the beginning of the summer concludes our Florida “season.”   We’ll get to a few more Class A+ minor league games but as part of the summer is scheduled for traveling, our boat is best stored on land during the hurricane season.  Thus, early yesterday morning I made my annual solitary trip leaving the North Palm Beach Waterway and the PGA bridge behind, 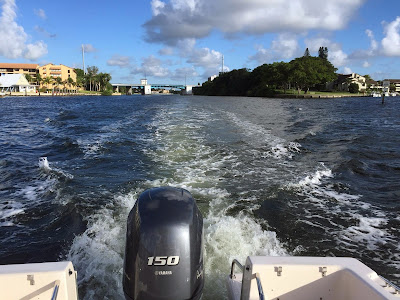 and emerging into Lake Worth to run down to Riviera Beach where I was met at a boat ramp by Mariner Marine, the dealer for the Grady White.  After getting the boat up on the trailer and climbing down, it is but a short ride to the dealer and there I arranged for the annual servicing as well, saying farewell to our center console, ‘Reprise,’ but knowing when I pick her up in the fall, that it will have been serviced and detailed, looking beautiful for more time on the water.  And at my age I now must add, health willing of course. 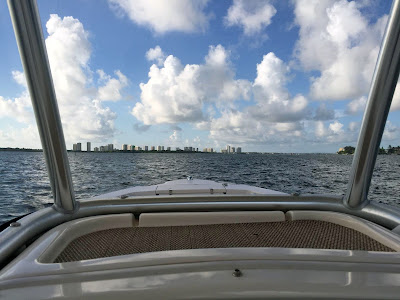 The night before we saw another minor league game, this time the Bradenton Marauders (Pittsburgh Pirates affiliate) facing off against our Palm Beach Cardinals at Roger Dean Stadium.  We decided to sit behind home plate so I could get a better view of the pitching: two fine pitchers were at work. 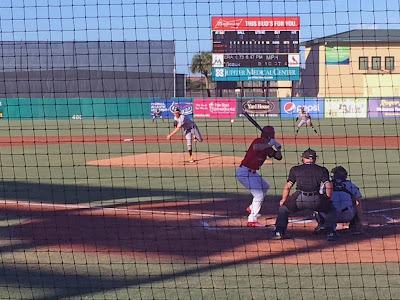 First there was a fellow lefty, Cam Vieaux, who was drafted in the 6th round only last year and is carrying a 1.42 ERA since joining Bradenton.  Vieaux is clearly a control pitcher with a fast ball only in the low 90s which he mixes with a change-up and a curve to keep batters honest.  But if batters guess fast ball correctly, he is hittable, and as a result gave up 11 hits in 7 innings.  Andy Young found that key in the 6th inning with a home run, tying the score 2-2.  Still, Vieaux gave up only 2 earned runs while recording only 2 strike outs.  He is a crafty lefty and as he perfects his style, he has future potential. 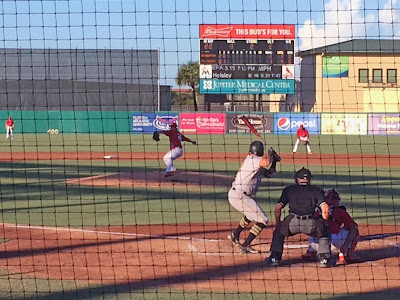 On the other hand, the Palm Beach Cardinals right hander. Ryan Helsley, is a classic power pitcher, his fast ball in the high 90s. The Cards lifted a large number of foul balls as batters got under the ball or not able to get around on those fast balls.  He was drafted in the 5th round by the St. Louis Cardinals out of Northeastern State and has averaged more than one strikeout per inning in the minors with a career 2.20 ERA.  As with many young pitchers, location is the issue and he needs to get to the point of recording outs with his other pitches.  He went six innings with seven strikeouts, also giving up two earned runs.  He’ll learn and when he does, he’ll move up.

As it turned out, the game stayed at 2-2 and went until the early morning hours, the Palm Beach Cardinals finally scoring the winning run in the 14th inning, a walk off infield single by Leobaldo Pina.  By that time, we were long-long gone, the pitching and seeing good ball playing more interesting to me than the outcome of the game.

I’ve said it many times before – Class A+ ball in the Florida State League is normally every bit as professional as a major league game, and several of the players we’ve seen over the years have graduated to the majors.

All in all it was a beautiful night for baseball at Roger Dean Stadium and an equally fine morning to run the boat one last time this season. 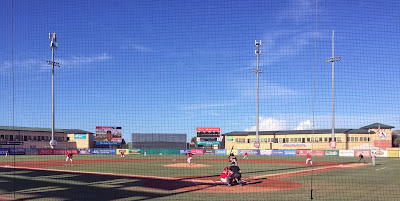