The Boys of the Hot Florida Summer Play Ball 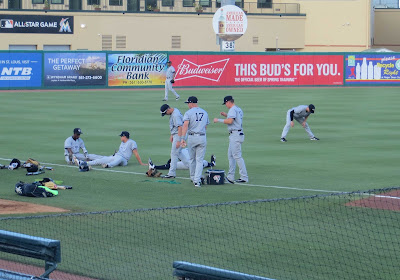 Major League baseball spring training has now departed the halcyon fields of Florida and the real boys of the hot summer have arrived for Florida League Class A+ minor league ball, the Jupiter Hammerheads (Marlin’s affiliate) and the Palm Beach Cardinals (St. Louis’ affiliate) playing at our home turf of Roger Dean Stadium in Jupiter, FL.  We missed the first Weds. night game of the “Silver Sluggers” promotional circuit, still the best baseball deal around, 30 bucks total for a ticket to every Weds. night game of the season which includes a soda and peanuts.  They used to include a hot dog instead of the peanuts (or pretzel or popcorn) but I suppose cutbacks eliminated this perk.  However they give out an “Official Silver Sluggers membership card” which I guess they think to us seniors is as exciting as getting a Captain Video ring when we were youngsters.


They’ve also cut back on places to sit and eat near the concession stands (actually, there are no more picnic tables there), requiring you to haul your food and drink to the seat and they don’t even provide a cardboard tray.  Hey, it’s good for you old people to learn balance your food as you walk up the steps! We used to arrive early, have a bite before the game at a table, then watch a little infield practice and then sit back and watch the game.

Roger Dean Stadium is showing its age and rather than providing some seating for eating and sprucing up the place they’ve ignored their new competition of the Ball Park of the Palm Beaches. Right now the BPofTPB is hosting only Spring Training but if they get a minor league team there, Roger Dean Stadium will be affected.

Still, it was a glorious Florida night to take in our first game of the season and serendipitously the visiting team was the Tampa Yankees, the Class A affiliate of the MLB team I most closely follow, the New York Yankees.  Much has been said about the Yankees building their team of the future from their farm clubs rather than signing multiyear contracts with aging free agent stars.  Well, after last night, don’t depend on the Class A affiliate but look to the Trenton Thunder (AA) or The Scranton/Wilkes-Barre RailRiders (AAA). 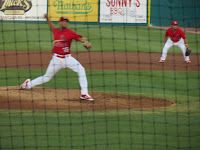 Regarding last night’s game, credit goes to Junior Fernandez the Palm Beach Cardinal’s pitcher who is only 20 years old but has been pitching professionally for three years already.  He’s high up on the Cards’ prospect list and for 6 and a third innings he had a perfect game going against Tampa until the Yankee’s #19 prospect, second baseman Nick Solak, got a single with one out in the 7th. Solak also chalked up a double later in the game and those were the only two hits the Tampa Yankees had.  Meanwhile, they managed to play a downright sloppy game, their two errors leading to three unearned runs which left Yankee starter and #13 prospect Domingo Acevedo with the loss, although his 99 MPH fastball was humming, leading to 6 strikeouts in 6 innings. 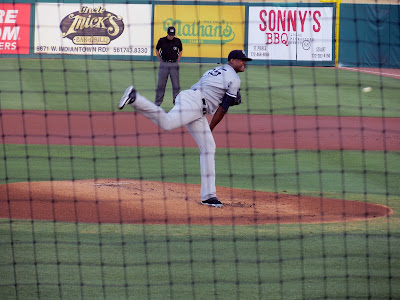 The much touted Yankee shortstop prospect (#4) Jorge Mateo had a lackluster game going 0 for four and his infield play was unimpressive.  Maybe it was just an off day, but he’ll have to play better than that to make the parent team one of these days. 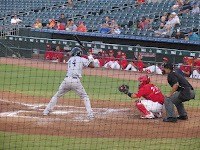 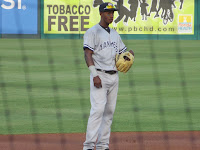 Although the game was unremarkable (except for the nearly perfect game), the night was wonderful, enjoying the Florida breeze and the cadence of baseball.  I’ve seen many Class A ball games and I’ve always said that they are as professional as MLB in every way.  Last night was the first disappointment in that regard as, at times, the Tampa Yankees looked like a bunch of sandlot players.  But as they say, wait ‘till next week!