Barbarians IN the Gate 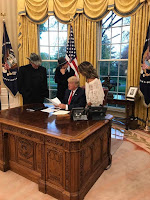 It didn’t take long to deface The Office of the Presidency, celebrity triviality “trumping” expertise and dignity.  To the victor belong the spoils and it is no more in evidence than the recent White House fête personally hosted by Donald Trump, his guests being Sarah Palin, Ted Nugent and Kid Rock, whoever the latter two are.  Supposedly, Sarah invited Ted and Kid because Jesus was busy.  During their four hour run of the White House including a white china dinner they apparently discussed “health, fitness, food, rock ’n’ roll, Chuck Berry and Bo Diddley, secure borders, the history of the United States, guns, bullets, bows and arrows, North Korea, [ and ]Russia.”  It is reassuring to know our President is getting such good advice.

According to NPR, Mr. Nugent described the visit as follows: "Well well well looky looky here boogie chillin', I got your Shot Heard Round The World right here in big ol greazya— Washington DC where your 1 & only MotorCity Madman Whackmaster StrapAssasin1 dined with President Donald J Trump at the WhiteHouse to Make America Great Again! Got that?" 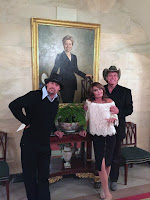 For a fuller account of the symbolic desecration of the White House with some official White House photographs go to Sarah Palin’s website.  This includes a photograph of the three mocking the portrait of former first lady Hillary Clinton.  According to the New York Times, an unnamed person “asked the three to extend their middle fingers beneath the portrait.  ‘I [Mr. Nugent] politely declined,’ he said. ‘Let the juxtaposition speak for itself.’”

Meanwhile, apropos to this topic, a recent Palm Beach Post cover story revealed the contributions to Donald Trump‘s inaugural committee and not surprisingly, some of the larger contributors are right here in the Palm Beach area, the home of the so-called Southern White House (might as well be the White House given the extent of his time here).  The leading donor in this immediate area was billionaire Chris Cline whose private company has more than three billion tons of coal reserves.  No wonder he was happy to throw in $1million to the inaugural festivities. Presumably such contributions assures a place in the new swamp. It is truly a plutocracy of self-serving popular culture or corporate elitists.

Jim Wright, the author of the Stonekettle Station blog has written a related essay on this topic,The Hubris of Ignorance.  Wright used to write obsessively in his blog but over time has turned more to Twitter for his incisive jabs.  Thankfully, he’ll still post a lengthy, thoughtful essay.  This is must reading from an ex-military man who sees the world, and the administration, for what it is.  A brief quote from his most recent entry summarizes this issue of expertise (or the lack of it) and “the cultivation of intelligence”:

The men who freed this country from King George and then went on to forge a new nation were intellectual elites, the educated inheritors of The Renaissance and products of the Early Modern Age. They were able to create a new government because they were experts in government, educated in war and politics and science and religion and economics and social structures and all the hundreds of other things it takes to build a nation instead of tear one down.

Unlike their foolish descendants, the Founders knew that liberty and democracy and good government take far more than shallow patriotism.

More than anything, it takes the cultivation of intelligence instead of pandering to the lowest common denominator.