How many of us have had important mentors, without whom our lives may have turned out very differently?  When thinking about my own life, the first name that springs to my mind is Roger Brickner. I’ve written about him before, and this entry provides much of the background.  In short, he was my Honors Economics teacher and my grade advisor when I was a senior at Richmond Hill High School.  Miraculously, we reconnected 50 years later as he was the honorary chairman of my high school’s 1960 class 50th reunion, one I was unable to attend.  But since then we’ve been in touch by email, particularly during Presidential and mid-term elections.  You see Roger’s avocation – among other interests since retiring from teaching – is analyzing elections and projecting outcomes.  As he said “my interest in politics is an enthusiastic avocation. I began to predict presidential elections as a teenager and since I thought Dewey would win in 1948 I have been lucky to pick every winner since that time.”  That is, until the recent election.

In addition, he is an amateur weatherman, taking after his own heroes, Benjamin Franklin and Thomas Jefferson, carefully recording the salient weather facts at his early 19th century home in the heart of Haverhill, NH.  And he still loves to travel, having been to more than 100 countries and to most U.S. states.

Between our travels and his, we knew there would be a time they would intersect and yesterday was the day, as he and a friend were making their way south, having stayed in Charleston SC for a while, and now on their way to Deerfield Beach, FL.  So he called and I suggested we meet for lunch at The Cooper in Palm Beach Gardens.

It had been 57 years since I last saw him; he has the same energetic, optimistic personality.  But did he realize how important he was to me at a critical juncture in my life?  Clearly he did not.  I didn’t know why I was selected for his Honors Economics class as my status in high school in the first three years would be almost classified as juvenile delinquent (the same old story, rebelling from my parents, in with the wrong crowd, taking pleasure just getting by in class, all in preparation to enter my father’s photographic business, a tacit obligation as I would be the fourth generation to run the business).

Roger said I was selected because he thought I was bright enough to do the work and with that encouragement I was turned on to learning, really for the first time in my life.  We were expected to do a term paper, just like in college!  I selected the topic of motivational research which at the time interested me.

So what did I bring when I saw Roger yesterday?  That paper.  He must have thought it bizarre that one would keep such a token of the distant past.  As a turning point in my life I obviously felt I should keep it (got an “A” by the way).  We were both amused to read my sophomoric conclusion: “Today [1959] motivational research is being used mainly to manipulate the consumer and slowly being used to direct the citizen.  Perhaps in the future manipulators will be trying to control every phase of our lives.”  Roger circled that and wrote boldly: “Surely you must have some comment on this.  Hitler, of course, was a master of these techniques – what shall we do about it?”  And now, we both agreed, perhaps that may be happening via social media, “fake news” etc.  So what should we do about it?

And that is Roger, always inspiring.  Without him, maybe I would have gone into my father’s business, which would have failed anyhow.  I still enjoy photography, but strictly as a hobby. So, I ended up doing what I loved, not photography or motivational research, but publishing. 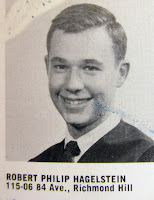 Then (from my HS Yearbook, my photo partially sullied by a classmate and Roger’s, one that I took as I was the photographer for the Yearbook)… 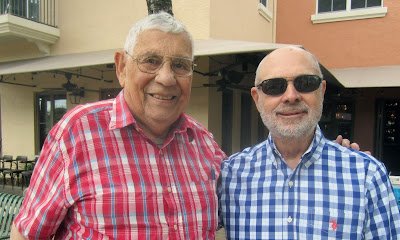 Yesterday we talked a lot about Richmond Hill where we both grew up.  At one time he lived on the same street as my grandfather – 109th street off of Jamaica Avenue.  I spent my grammar school days at PS 90 right opposite my grandfather’s home which became my Uncle Phil’s.

We moved to 115th Street and 84th Avenue right before I began High School – a long walk then as there were no school buses.  At one time Roger lived near Lefferts Blvd, which was near my home as well.  He went on to Queens College and then Columbia for his Master’s Degree with a nearly two year interlude in the army serving during the Korean War.

Reminiscing, we couldn’t help but think of Jahn’s as Roger had ordered The Cooper Sundae for dessert which was a dead ringer for Jahn’s infamous “Kitchen Sink.”

Good times, good talk, and it was great to see him 57 years later, and to thank him.

A teacher affects eternity; he can never tell where his influence stops. Henry Adams