The Night of the Iguana at Dramaworks – Tennessee Williams’ Poetic Drama 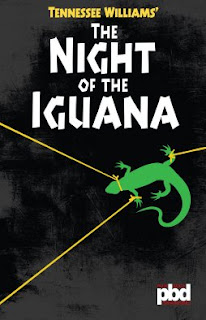 Dramaworks’ opening season traditionally begins with a challenging masterwork, with a full scale cast, and The Night of the Iguana, perhaps Tennessee Williams’ greatest play, is no exception.   This is their first Tennessee Williams play, something director Bill Hayes felt the company could not do until they were ready.  Opening night occurred after one preview performance (delays in rehearsals courtesy of Hurricane Matthew), conceivably an obstacle in making this a totally flawless production.

Under the allegorical canopy of a tropical sky The Night of the Iguana unfolds as two improbable “kinsmen met a night” – the defrocked Reverend Lawrence Shannon and the persevering artist Hannah Jelkes.  Williams’ setting is an unforgiving universe where survival and endurance are requisite attributes.

As an epigram to the play, Williams quotes the last four lines of an Emily Dickinson poem, “I Died for Beauty.”   Shannon and Jelkes are indeed “brethren” in that they are out of place with the rest of the world on the Mexican coast at The Costa Verde Hotel in 1940 – an actual hotel where Williams himself stayed during that time, loosely basing the play on his own personal experience.

I quote the entire poem as it has relevancy in my opinion:

I died for beauty, but was scarce
Adjusted in the tomb,
When one who died for truth was lain
In an adjoining room.

He questioned softly why I failed?
"For beauty," I replied.
"And I for truth, -the two are one;
We brethren are," he said.

And so, as kinsmen met a night,
We talked between the rooms,
Until the moss had reached our lips,
And covered up our names.

The play is heavily constructed around symbolism and metaphor, the most obvious being a captured Iguana which is tied at the end of a rope awaiting slaughter.  It represents the human condition. Shannon exclaims that he is going to go down there with a machete and cut the damn lizard loose so it can run back to the bushes because God won’t do it and we are going to play God today.  The very difficult role of Rev. Shannon is played by Tim Altmeyer who endeavors to express the anguish of this tortured character, but at times he makes Shannon appear more pathetic than desperate. Unfortunately, not all of Altmeyer’s dialogue could be easily heard (or understood) and therefore some of Williams’ brilliant language was lost on the audience. 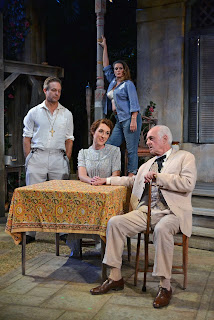 Although Shannon is “a man of the cloth,” Hannah’s own theology (her philosophy of living) gives her the power of redemption, Shannon admitting to her that he arrived, at this place in time, his voice choking, to meet someone who wants to help me, Miss Jelkes.  Williams’ stage direction describes Hannah as “remarkable looking – ethereal, almost ghostly.  She suggests a Gothic cathedral image of a medieval saint, but animated.  She could be thirty, she could be forty: she is totally feminine and yet androgynous-looking – almost timeless.”  Katie Cunningham masters the mysterious Hannah, capturing her delicacy on the one hand, and her steely strength on the other.  Her performance is almost certainly what Williams had in mind when he originally wrote the part for Katharine Hepburn (who was unavailable at the time the play was staged).

Jelkes has traveled to Mexico with her 98 year old Grandfather, Nonno.  He is a “minor” poet who hasn’t written anything in decades, but is now working on what will be his last poem.  Hannah and Nonno, in spite of their obvious education and Nantucket upbringing, are now reduced to a peripatetic life of “depending on the kindness of strangers” to borrow from another Tennessee Williams play, Hannah doing quick artistic sketches and Nonno reciting some of his poems for money and room and board.  Dennis Creaghan, the seasoned professional, his ninth time on stage at Dramaworks, plays Nonno, deftly mines his character’s aging angst trying to finish his first poem in 20 years.

A group of German tourists are also guests at the hotel.   As it is the summer of 1940, they are closely following the Battle of Britain on the radio.  Their demonic, bacchanalian behavior – and their sense of arrogance, knowing that they are “right”-- is juxtaposed to the inner struggles of Hannah and Shannon to find themselves.

If Hannah is a Freudian superego, the other key female character, Maxine, is clearly the id.  She is sultrily played by another Dramaworks veteran, Kim Cozort Kay.  Maxine was married to Fred, Shannon’s friend, a Hemingwayesque character who, unknown to Shannon, had just recently died.  Shannon detoured his tour group-- women from a Texas Baptist college --  to the Costa Verde Hotel in a last ditch effort to salvage his job with the third-rate Blake Tours, hoping that Fred would be able to rescue him.

The woman who engaged Blake Tours for the Mexican tour, Judith Fellowes, is enraged by misrepresentations made of the tour and by Shannon’s one night sexual encounter with the youngest woman in the group, the 16 year old Charlotte Goodall, played by Alexandra Grunberg making her Dramaworks debut.   Fellowes is a one-dimensional character (always angry) but a catalyst, off stage and on, for moving the action; she is played by long time south Florida actor, Irene Adjan.

With Fred deceased, Shannon is now desperately dependent on Maxine as she is on him.  Prior to his unexpected arrival, she was a lonely widow being “serviced” by two young Mexican boys, her only source of intimate human contact after years of a celibate marriage.  She needs Shannon, but he is on the verge of a nervous breakdown.  He has suffered these episodes before (“the spook” as he refers to it), a condition Maxine is very familiar with. 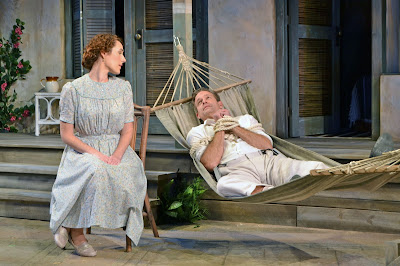 Williams masterfully brings all of these themes together probing Hannah and Shannon’s relationship and their recognition that they are both damaged creatures, at the end of their ropes.   Ultimately Shannon has to be restrained in a hammock, much the same way as the Iguana is tied, while he is pursued by “the spook.”   Hannah rescues him as he ultimately rescues the Iguana.  She observes while he is tied up:  Who wouldn’t like to suffer and atone for the sins of himself and the world if it could be done in a hammock with ropes instead of nails, on a hill that’s so much lovelier than Golgotha, the Place of the Skull, Mr. Shannon?  There’s something almost voluptuous in the way that you twist and groan in that hammock – no nails, no blood, no death.  Isn’t that a comparatively comfortable, almost voluptuous kind of crucifixion to suffer for the guilt of the world, Mr. Shannon?

The play culminates in Nonno’s completion of his poem, one that embodies Williams’ themes, man’s relationship to nature, to God, to death and to a new kind of love that transcends “the earth's obscene corrupting love.”  Full circle back to Emily Dickinson’s virtuous love of beauty and truth, the two main characters’ “failures” (“he whispered softly for what I failed”) being an intimate knowledge of one another, a kind of uncorrupted understanding.  It is Williams’ most hopeful play, or, as he put it “how to live with dignity after despair.”

Executing this play is complicated.  Hayes strives to walk that fine line of being trapped in symbolism and the melodramatic, so typical of the theatre in the early 1960s, seeking to attain a sense of heightened realism.  His assistant director is Paula D'Alessandris.  Hayes is skillfully supported by the incredibly talented Dramaworks technicians. 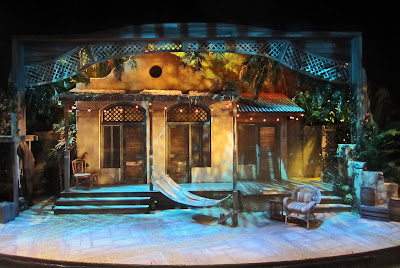 Scenic design by Michael Amico craftily captures the theatrical realism of a hotel in decay, the encroaching active jungle, alive with danger, and the symbolic isolation of the separate rooms on the verandah (I think of the tombs in Dickinson’s poem).  Paul Black’s lighting design works in harmony with the set, characterizing a wide range of lighting challenges, late afternoon sun, sunset, a long night, and a severe storm.

Matt Corey’s sound design serves up that storm, echoes from the hills, and appropriate guitar interludes, all in sync with the production.  Brian O'Keefe, PBD resident costume designer creatively captures the era and the sweltering heat, as well as Hannah’s stealthy delicacy, as if she is indeed otherworldly.

Dramaworks’ The Night of the Iguana is an ambitious production by one of America’s greatest playwrights. 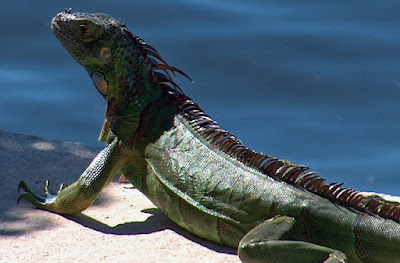