Palm Beach Country got very lucky with Hurricane Matthew which, almost until it passed, looked like it had the potential of coming very close to the northern part of PBC where we live.  My heart goes out to those in North Florida, Georgia and the Carolinas, driving through those coastal cities scores of times up and down on our way to Connecticut as well as once joining our friends Ray and Sue on their boat, taking it from Connecticut via the Intracoastal to our dock in Florida.  So we know first-hand the areas now being devastatingly impacted. It could have been us.

I don’t worry about our house much, particularly as it has been fortified with a combination of hurricane impact windows on the north and south and beefy roll downs on the porch with Lexan impact clear shutters on east and west windows.  I replaced the garage door with one that weighs a ton as it has horizontal aluminum beams for hurricane protection and also replaced the roof using the Polyset roofing system designed to withstand a Category 5 hurricane.

What I do worry about is our health, riding through another hurricane, remembering Wilma, and always concerned about tidal surge as we live right on the water, although that has never been a problem here. Florida is less vulnerable to a direct surge as the ocean depths off of Palm Beach Country drops quickly mitigating surge.

But Matthew was not coming directly; it was paralleling the coast, bringing in strong NE winds, pushing water over several tide cycles.  Although we were prepared to ride it out, on the morning of the storm’s expected arrival local TV stations were warning about tidal surges of unheard of amounts in this area. This made us rethink the matter.  We’ve done everything to secure the house, so why stay, but where to go?

Calls to local hotels away from the water went unanswered or were put on hold permanently.  Of course, everyone was thinking the same thing.  We were not about to get on the road, aimlessly driving around without a reservation. As Hilton Honors members, I called them and they said everything was booked west of us, but how about the Palm Beach International Airport Hilton where they could get us a room.  Perfect.  Book it!  We’ll be there in an hour before the first feeder bands arrive!

What ensued was a fire drill, the two of us throwing clothes and medications into our overnight bags, Ann organizing food, snacks and water in a cooler in case the hotel lost power. I retrieved some of our emergency supplies, flashlights, spare batteries, a radio, and so on, again in case of a power failure, as well as the all important electronic gear, iPhones, chargers, and my laptop as well, not to mention books.  Half the stuff was thrown into duffle bags or whatever.  We looked bedraggled before we left.

But once in our comfortable hotel room with impact windows we were both so relieved.  We ran down for breakfast, a delicious buffet with made to order omelets & great coffee.  Then we simply hunkered down, rested and watched the TV weather reports for the entire rest of the day until we finally went to bed.  Ann made lunch from the food she brought but we ran down to a crazy noisy bar for a bite of dinner.  We both were able to get a good night’s sleep because by then we knew that the brunt of the storm was going to miss us.  But who knew?  We could have been like the unfortunate people north of us.  A difference of only a few dozen miles in the path of the storm would have resulted in something quite different.  So we were really lucky. We just woke up, packed, got dressed & checked out.

We thought we might lose power in our home for perhaps an extended period and in that case we had the very kind invitation of our friends and neighbors John and Lois to stay in their guest bedroom as they have an all house natural gas generator (we have a generator, but it runs on gasoline and one could not get gas here by the time the storm was a real threat). Our power flicked but was never lost. I'll give Florida Light and Power some credit as they've made some huge infrastructure investments since Wilma roared through here more than 10 years ago

So we’re dodged another one, but can’t help think constantly of those north of us along our normally beautiful east coast, not to mention the poor people of Haiti who have endured so much devastation.

I took this photo from our backyard the night after the storm.  What a difference a day makes, or a few miles in a hurricane’s track. 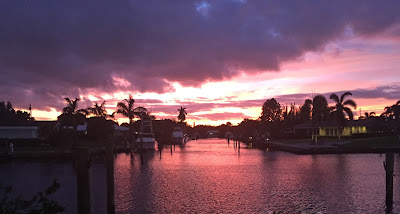