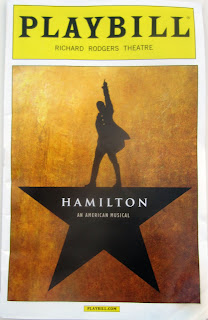 Ann and I once again boarded the New Haven train to NYC, this time to see Hamilton.

It’s everything that has been written and said about the show, probably the most talked about Broadway musical prior to its opening in history.  No sense repeating the story here about Lin-Manuel Miranda’s genius in putting together the most original Broadway musical since, perhaps, Oklahoma.  As with Oklahoma, Hamilton breaks all the rules, but similar to its predecessor, it uses dance, music, acting, and a fine “book” to move the action along.  The action is explosive, a constant pulse measuring the beginning of our nation, the meaning of compromise, and the contributions of immigrants, particularly the Caribbean born Hamilton. 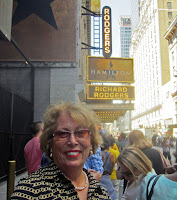 This nation’s historical founders are played by minorities in period customs, singing history through the medium of rap and hip hop, where the copious dialogue springs to life.  There are very few speaking parts, and that factor as well as the staging, the subject of revolution, and some of the love songs hearken back to a previous transforming musical, Les Misérables.  The reminder of the latter in Lin-Manuel Miranda’s work is omnipresent.  And like “Master of the House” there is a change of pace humorous song embedded in Hamilton as well, one sung by a foppish King George entitled “You’ll Be Back,” which contrasts with the hip hop in the show.  It was sung with such a recognizable Beatles’ beat that the audience erupted into instant laughter.  Nevertheless, the other music, even for old Rodgers and Hammerstein and Stephen Sondheim fans, was memorable. Rap songs such as “My Shot” and “The Room Where it Happens” run like leitmotifs throughout the show and get under your skin (not that I could sing them or even play them on the piano). 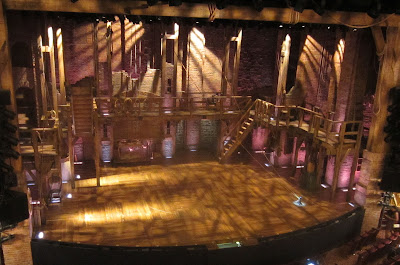 If I had to sum up the musical in one word, it’s pure raw energy. Never a dull moment, with many emotional ones, particularly if one has an understanding of the beginnings of this nation, as well as cautionary inferences pertaining to our own times, it is the must see show of this season, and probably many to come.  We were fortunate to be able to get tickets months and months ago when we first heard about it. 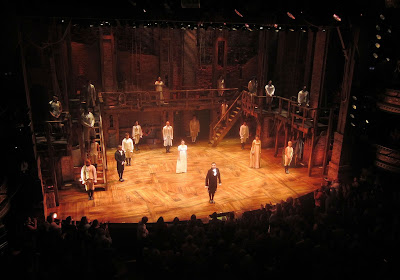