An American in Paris in NYC 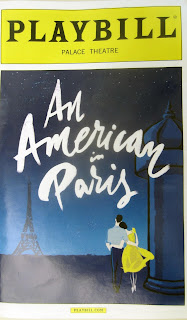 Last Sunday we ventured into the city to see An American in Paris.  Jonathan saw the preview in Paris of all places and gave us ample advance notice of how spectacular the production was and therefore we were able to buy tickets in the third row center many months ago, perfect seats for the most stirring Broadway musical we’ve seen in recent memory. 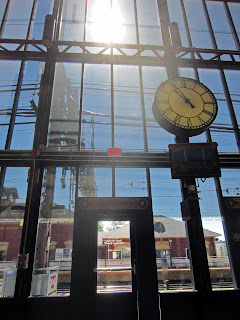 From the South Norwalk train station we emerged into the light at 45th and Vanderbilt.  We had a luncheon reservation at one of our favorite restaurants, Orso’s (conveniently located in NYC’s Restaurant Row between 8th and 9th Avenues on 46th), one we’ve been to on and off during the past 30 years (especially Ann who used to do Wednesday matinees with friends while I toiled away at work : - )

Normally we would walk this, but Ann’s knee has been giving her trouble, so we agreed to “Uber” there and after the show walk back to Grand Central Station when traffic would be impossible anyway.  Uber is an amazing service.  Had a Lincoln Town car picking us up in four minutes and if it were not for the delays getting past 6th Avenue because of the Dominican Republic parade, it would have been a breeze.  Still, we made it in about 12 minutes.  I love the concept of no cash trading hands and getting an email two minutes after we exit the car of the cost ($9.23). 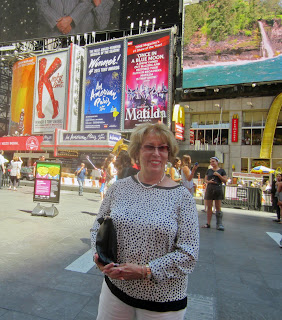 After a delicious lunch, trout for Ann and rigatoni in meat sauce for me (wanted something more hardy – this was to serve as both lunch and dinner), we walked over to the theatre which is on a Times Square I no longer recognize, throngs of people as usual but the panorama reminded me more of Las Vegas than my beloved New York City, packed with tourists of course with the most popular hawked item being those “selfie” sticks.  We’ve become a world of solipsistic hedonists,  selfies snap away and post them on Facebook, just about the most passive act of saying, “hey, look at me!”  So while everyone was clicking away pictures of themselves, with Times Square tumult in the background, I took a few “non-selfie” shots to document the moment and we made our way to the theatre, mobs of people --- mostly tourists it seemed (I seem to forget that is our status now : - ) trying to get into just one narrow entrance. 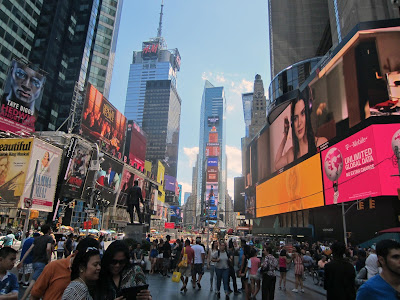 Sitting alone on the stage before the performance began is an older grand piano, perhaps much like the one George Gershwin might have composed on.  And that is the conceit of the play – a composer being central to the action, Adam Hochberg (a.k.a Oscar Levant) movingly played by Brandon Uranowitz.  He composes a ballet for a woman he has fallen in love with, Lise Dassin, luminously performed by Leanne Cope.  Unfortunately for him, two other men are in love with her too, Jerry Mulligan (Robert Fairchild) and Henri Baurel (Max von Essen).  Because Lise and her family were harbored by Henri’s family during the Nazi occupation of Paris, she feels honor bound to accept his proposal although her heart has clearly been lost to the artist, Jerry, who fell in love with her at first glance.  All the action takes place in post WW II Paris and of course the “book” heavily relies on the movie version of An American in Paris. 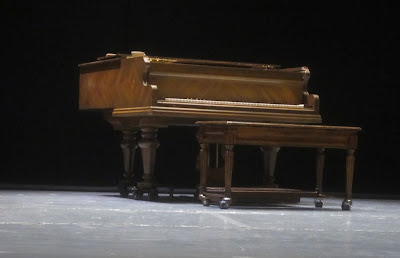 In fact, the two leads could easily pass for the two movie leads.  Robert Fairchild, the principal dancer with NYC Ballet, credits the physicality of his dancing to his idol, Gene Kelly, and Leanne Cope is highly reminiscent of Leslie Caron.  But interestingly both Fairchild and Cope are luminaries in the world of ballet, not Broadway theatre.  It is remarkable to witness the transition – even their singing roles were of Broadway caliber.  Ann and I laughed when we heard someone say there was too much ballet in the production.  The dancing was superlative, breathtaking and from our vantage we could see every drop of sweat, and could feel the incredible energy that went into the play. As for the astounding performance by Fairchild, Ann could not stop raving about the perfection of his dancing, his grand jetes, his jazz movements and energy.

Ann was particularly interested in seeing Sara Esty, a talented young dancer she has enjoyed watching from her first performance with the Miami City Ballet when she joined the company several years ago along with her twin sister.  She auditioned and won a part in the Ensemble of this show enjoying the time spent in Paris and blogging about it.  Well to our surprise, we noticed in the Playbill that in addition to this being her Broadway debut; she has been chosen to dance the lead in place of Leanne Cope on the Wednesday matinees, surely an indication of how far along her career has progressed.  Robert Fairchild has substitutes as well for the Wednesday evening and Saturday matinee performances, so we were fortunate to see the leads at our Sunday matinee.

But for me, the heart, the very soul of the production is the music of George Gershwin.  I feel I have a special affinity for his music    -- much of it is the bulk of my more confident piano repertoire.  After hearing this production I’m tempted to play only Gershwin in the future, committing pieces to memory, learning how to play his music even better.

Unlike the film, the Broadway production is far ranging as far as his music is concerned, including pieces I don’t remember in the movie, such as parts of the “Cuban Overture” and many other Gershwin songs.

An American in Paris is a massive undertaking, even on Broadway, a full orchestra, a large cast and striking, multiple sets.  The pace was intense under the brilliant direction and choreography of Christopher Wheeldon.  During intermission while Ann went to the ladies room, I texted Jonathan my thanks for pushing us to get tickets early, beginning my text with just two words.  “Intermission.  Fabulous.”  When Ann returned to her seat she said that she texted Jonathan.  I said I did too.  She said, here, look at what I wrote and it began with two words. “Intermission. Fabulous.”