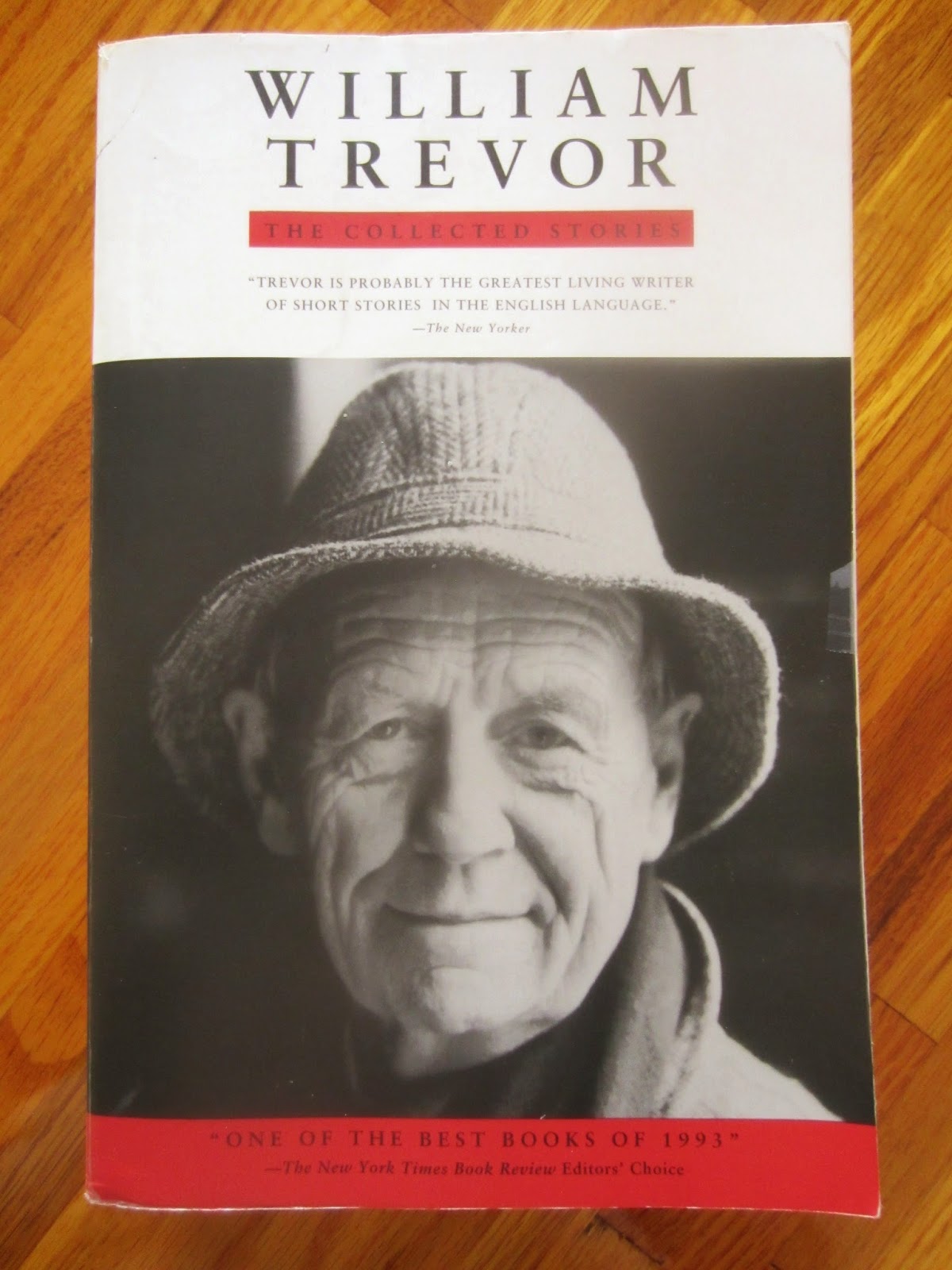 I’ve just begun to plow through William Trevor’s massive The Collected Stories, a treasure house of some eighty five short stories, all 1,250 pages of them.  One can appreciate why he has been called one of the greatest UK short story writers. They are masterful stories and although my preference for American literature had – until now -- overridden my desire to read Trevor, I knew Updike had a high regard for his work (and Trevor reciprocated his admiration for Updike’s).  It took the mention of a Trevor short story in an Ian McEwen novel, Sweet Tooth, to remind me that there is a world of literature out there I haven’t yet uncovered and as I’m trying to write some of my own short stories, I picked up this gem from one of Amazon’s partners for less than a buck plus shipping.  An incredible bargain, if you have the strength to hold book, especially when reading in bed, a habit I’ve developed in the quiet of the night.  But this 2 plus lb book requires support on a pillow on my stomach as I read in bed!  Sometimes, as much as I enjoy reading at that particular time, I find myself falling asleep with my glasses on, still holding the book on the pillow, my wife finally turning off the light, removing the book from my sleeping hands, marking the page, and removing my glasses.

It’ll be some time before I’m “finished” with these stories (other than for reasons of occasionally falling asleep!).  First, they are to be savored and thought about.  It’s not a fast read, particularly for someone who is trying to better understand the short story craft and is taking notes here and there.  Some stories are best appreciated when reread as well. Furthermore, I have other things to read so I’ll put this down from time to time to get to those other works, novels generally.  And of course, there is life to attend to.  Reading is what is left over to do after a busy day.  Therefore, these early comments on what I’ve read thus far.

How do I possibly categorize these stories?  As Updike had his characters -- such as The Maples --- mostly modeled after friends and family, highly educated, upper middle class folk with an excessive libido, Trevor has his “little people,” people eking out a life in the UK after WW II, some of whom have allowed their fantasy lives to take over, living with illusions frequently to the very end of the story, ones of which they may not even be aware.  It leaves the reader with a sense of wonder, about human nature, about the miracle of day to day existence in general.  How do we all get by, burdened by the past or by expectations?  Trevor once defined the short story as ''an art of the glimpse,'' whose ''strength lies in what it leaves out.”  It’s the reader’s job to fill in the latter.

Many of the characters begin at one level of a story, exemplary folk in the reader’s mind, only to have life take them down a peg or two, then three, to the end of the story.   One such story, “The General’s Day,” concerns a retired General, well known in his town, who leaves his housekeeper during the day to explore the town, usually with fantasies of meeting a younger woman, or seeing friends (who assiduously avoid him), meanwhile suspecting his housekeeper of stealing from him or secretly imbibing his liquor.  And yet he goes off, and not everything goes as he’s imagined.  But there is the past to cling to, as do many of Trevor’s characters, along with their hopes.  Here’s just a piece of Trevor’s prose which makes this point:

The General walked on, his thoughts rambling.  He thought of the past; of specific days, of moments of shame or pride in his life.  The past was his hunting ground; from it came his pleasure and a good deal of everything else.  Yet he was not proof against the moment he lived in. The present could snarl at him; could drown his memories so completely that when they surfaced again they were like the burnt tips of matches floating on a puddle, finished and done with.  He walked through the summery day, puzzled that all this should be so.

Not wanting to give away spoilers, it’s hard to go on with this story gem.  Suffice it to say, the General’s day ends not as he hoped, but apparently as it always has, and the reader observes human nature stripped threadbare.  In fact, if anything characterizes Trevor’s stories, it is his unrelenting dissection of lives, bit by bit, getting to core truths, ones not evident at the beginning.

Thus far my favorite story is “In at the Birth” but to try to analyze it or say anything about it is just to spoil another reader's enjoyment of the story.  But I will say it is constructed with such care that the outcome, surreal in many respects, is still in keeping with Trevor’s love of his “little people.”   Meanwhile, I still have scores of his stories to read and perhaps I’ll revisit Trevor in these “pages” sometime again in the future.  Must confess, the sheer bulk of the collection starts to make sense reading on a Kindle, something I have resisted, not because I am a Luddite, but I’ve been a book person all my life (personally and professionally).

I remember commuting to my first publishing job in 1964 from Brooklyn to Manhattan on the BMT.  As any veteran “strap-holder” will know, it took a certain skill to hold on with one hand, and read a paperback book with the other, turning the pages with that one hand.  It’s a skill that is not applicable to this book!  Nonetheless, The Collected Stories of William Trevor is highly recommended if you like the genre.

PS  Trevor is "revisited" in this entry