The Random Nature of It All


Hat tip (again) to Barry Ritholtz who as a "financial guy" (actually schooled in law) has a logical way of looking at the inexplicable. He puts his spotlight on the recent gyrations of the stock market and the blather of the financial channels --  all constructing a "story" to "explain" sudden up or down moves in what, short term, is really a guessing game.  Media noise --  a  form of cognitive dissonance, contradictory "explanations" some of which appeal to investors and therefore feed the furnace of their convictions.  Which begets even more gyrations. As Ritholtz so accurately puts it: "people create a happy little bubble of delusion."  His article "What's Your Stock Market Story?" is well worth reading and keeping in mind when making one's next trade.

Speaking of the inexplicable, how do we mere mortals understand the consequences of a term that suddenly surfaced on the waters of our online lives: Heartbleed?  Perhaps a binary Loch Ness Monster?  How vulnerable is any online financial transaction or, for that matter, routine things like writing emails or even posting this innocuous blog?  And all of this the result "of a two-year-old programming error?"  Two years and we've all been lulled into a "happy little bubble of delusion" that all those "Secure Sockets Layer" web sites to which we've committed sign-ons, passwords, credit cards, etc. might have all been vulnerable and no one seems to have a full understanding of the consequence.  No consequences?  Armageddon? Somewhere between? A random programming error -- or an intentional one  -- that could have been silently exploited for two years?  Talk about a potential Black Swan. Here's Scientific American's take on it.

On to the random nature of one's career.  Looking back from the so called "golden years" how many can say that his/her career and how it unfolded was one of unsullied choice?  Choices do have to be made, but those are ones circumstances concoct, almost like one's DNA randomly assigned at birth.  I could have ended up as a photographer, a librarian, or even in the insurance business -- there were paths in front of me to each of the foregoing, but I choose publishing, my first job being the result of a chance interview.  From there, I was able to make choices over the next 35 years, but, even then, I was given a random set of options.  Do I choose from behind door #1, #2 or #3?

Once I was running a publishing company, one of the choices I made was to pursue international opportunities.  Japan became one of our largest overseas markets and so I occasionally made trips to Japan, sometimes alone, sometimes with Ann and eventually both of us with our son, Jonathan.  The Japanese culture had a profound impact on us all.


Fast forward to last night.  All those random choices.  No wonder when our gourmet club was deciding on the next "theme" -- one that was to be held at our home -- we suggested Japanese.  What a feast it was.  Our friend Lois made 3 platters of sushi: delicious fish, tuna, grouper and salmon.  We served a very good chilled saké with that and during dinner which everyone drank and  enjoyed.  Then Susan made authentic Miso soup along with tasty shrimp gyoza.  Gail brought short ribs with a Japanese barbecue sauce and a very refreshing side of cucumber salad. 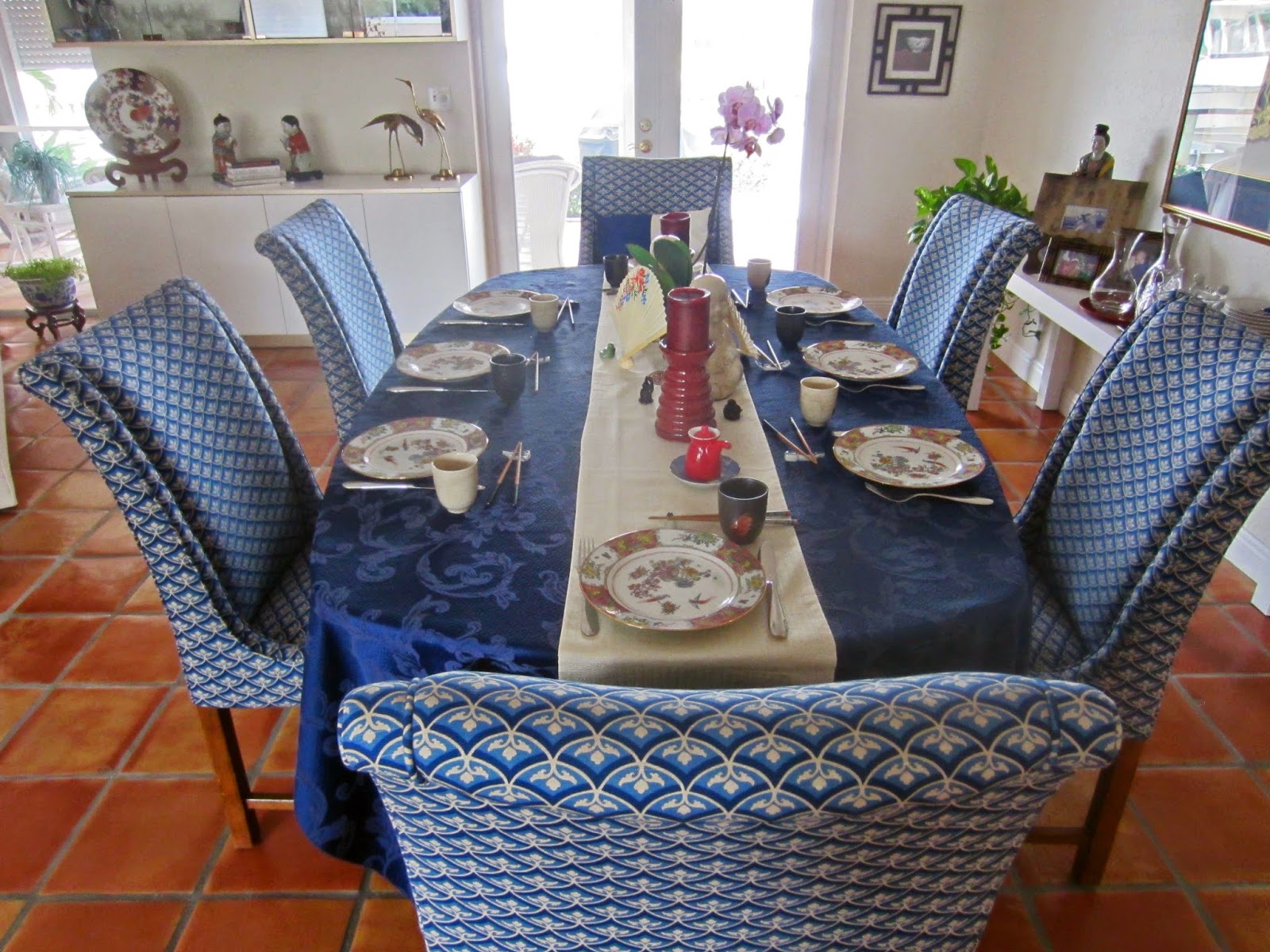 Ann made one of my favorites -- a genuine yaki udon dish with a homemade yakisoba sauce, tender pieces of chicken, red pepper, onion, bean sprouts, broccoli, shiitake mushrooms and scallions and of course udon noodles!  She also made traditional sticky rice (enough for twenty people!) along with glazed chicken drumsticks, serving it with a very nice Green Tea in beautiful tea cups that Susan brought.  For dessert, Ann served sweet pineapple and John made Green Tea Ice Cream that was out of this world.  Ann was in her authentic Japanese Happy Coat while our son, Jonathan, had given me some traditional bamboo flute music to play in the background, greatly adding to the evening's atmosphere. 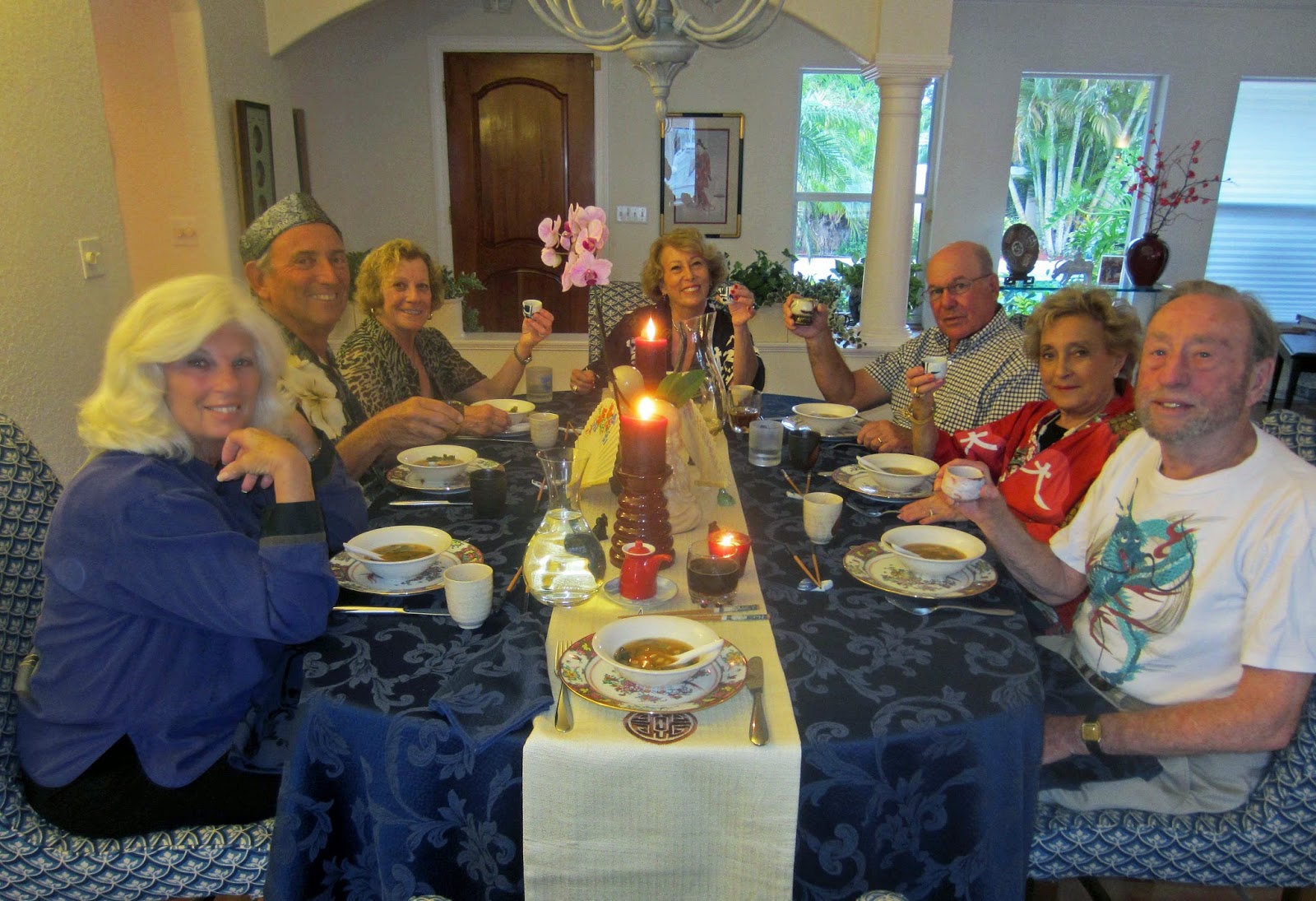