Flag Day and the Electronic World 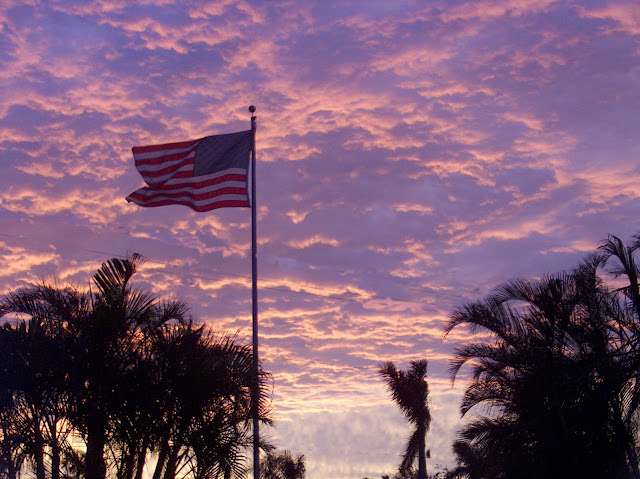 Flag Day. A time to reflect on the adoption of the flag we honor, and what it symbolizes.  In the world of 1776, it is a nation committed to freedom in its purist form.  Oceans separated us from the rest of the world, difficult for an invading army to breach that defense.

The Second Amendment, giving us the right to bear arms, was passed in 1791, a means of maintaining a civilian militia. ("A well regulated militia being necessary to the security of a free state, the right of the people to keep and bear arms shall not be infringed.")  At the time the flintlock musket was the standard weapon. Count on being able to fire it maybe 2-3 times a minute. Arms have evolved to the point where a deranged individual can hoard a surfeit of automatic weapons, making that one person a veritable army.

And communications used to be dependent on the mail, then the telegraph, the telephone, and now electronic everything, marrying all methods of communication from the printed word to video.  The Internet has given rise to threats that could not even be imagined by the framers of the Constitution and the Fourth Amendment.

Maybe it is time for a public debate on the issue, but the data mining being done by the National Security Agency cannot be a surprise to anyone.  Edward Snowden's so called whistle blowing merely politicizes what most suspected.

If anyone asked us the day after 9/11 whether the government should make use of private electronic communications with the sole objective of preventing any such future event, we would have merely said, where do we sign on?  How short everyone's memory is.  It is ironic that a liberal constitutional law professor -- Barack Obama -- now, as President, is carrying forth the NSA program which had been condoned by his predecessor.

The brave new electronic world exponentially enhances the weapons of guerrilla warfare, the preferred tactic of terrorist adversaries.  One does not fight this with the tactics of warfare when the Constitution was written, soldiers standing in straight lines right out in the open.  Clandestine electronic communications are fodder for equally clandestine data mining.  So, let the "debate" begin in Washington, but if it is anything like exchanges over the budget, it is liable to do more harm than good, unless there can be some consensus on an oversight mechanism that still preserves the intent of the program.

In this regard, I can't help but think of Aaron Sorkin's brilliant movie, A Few Good Men.  When Col. Nathan R. Jessup faces Lt. Daniel Kaffee on the stand, we are all rooting for Kaffee, recognizing the menace that Jessup represents.  But that was 1992.  With a little editing (my apologies to Mr. Sorkin), I can imagine how this might go today...

NSA to Snowden: Son, we live in a world of electronic communications, ones terrorists routinely use, and we have to be guarded by high tech surveillance. Who's gonna do it? You, Mr. Snowden? We have a greater responsibility than you can possibly fathom. You weep for your loss of freedoms and you curse the NSA. You have that luxury. You have the luxury of not knowing what we know, that some loss of privacy, while tragic, probably saved lives. And our existence, while grotesque and incomprehensible to you, saves lives! You don't want the truth, because deep down in places you don't talk about at parties, you want us data mining. You need us on that job. We have neither the time nor the inclination to explain ourselves to a man who rises and sleeps under the blanket of the security that we provide, and then questions the manner in which we provide it! I would rather you just said "thank you", and went on your way.