PAC ads are now running ceaselessly.  How many times have we heard that hushed voice, solemn in its accusatory tone, “In 2008, Barack Obama said, ‘We can’t mortgage our children’s future on a mountain of debt.’ Now he’s adding $4 billion in debt every day, borrowing from China for his spending. Every second, growing our debt faster than our economy, Tell Obama, stop the spending.”

Last week the Supreme Court made two major decisions, the really BIG one -- perhaps in part to ensure the Court's integrity as an non-partisan institution --  was to uphold the Affordable Care Act, but in a less publicized one it also declined to reconsider the Citizens United decision that has led to viral PAC advertising by corporations and wealthy individuals.  Montana had challenged the decision by contending its century-old Corrupt Practices Act might be applied to PAC advertising in state and local elections. Not so, said the Supreme Court:  let the PAC advertising flow, with all its inherent sound bites and vapid fury!

And concerning the Supreme Court's courageous decision to uphold the Affordable Care Act , our local Palm Beach Post columnist/humorist, Frank Cerabino, wrote a wonderful satire   In this age of posturing over substance, he shows how it could be used as a political harangue from any viewpoint, merely by twisting a few words in each sentence.  I quote the beginning paragraphs, but the full text can be found at the link here.

The U.S. Supreme Court’s (historic / activist) decision to uphold (the Affordable Care Act / Obamacare) is but a temporary (victory / setback) in our long fight ( for access to health care / against government intrusion ) in (America / the marketplace.)

The law that the Supreme Court upheld on Thursday will mean that scores of (uninsured / reluctant ) Americans will be (covered / forced) in a system that provides the kind of (care / costs) that the rest of the (civilized / Socialistic) countries of the world already (enjoy / are saddled with).


(Unfortunately / Fortunately), the Supreme Court’s decision won’t be the last word on this (triumph / travesty) of justice. There are already (sinister forces / courageous voices) who are prepared to take this battle to Congress, which can (subvert / stop) the health care law through (vindictive / corrective) legislative action." 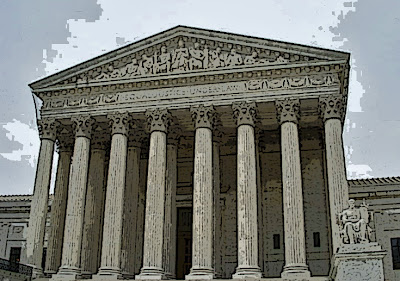