Palm Beach Dramaworks’ production of David Hare’s Skylight proves that in the hands of an experienced theatre company with outstanding actors and directing, an award winning play from more than 20 years ago can be polished into one as relevant as the day it first came to the stage.

In an NPR interview Hare summed up his unique perspective on his writing which is clearly evident in Skylight: “I've always written plays in which social forces and historical forces are blowing through the room and affecting how the people feel and think. And this is, if you like, crudely, a Shakespearean approach to playwriting where you're always trying to show the way social and historical forces change individuals.”

Hare has been considered a modern day successor to the “angry young men” of British playwrights and novelists of the mid to latter 20th century who looked towards changing society.  In particular Skylight has class issues as a subtext of a real life relationship conundrum.  Vanessa Morosco, the director of Skylight, finds that sweet spot in the humor and the painful pauses of Hare’s pointed dialogue.

The action transpires in the dingy freezing flat of the main character, Kyra Hollis, played with steely coolness by Sarah Street, her PBD debut.  While all characters in this play are grieving and guilt-ridden, she has deliberately chosen a life without any extra benefits whatsoever.  Although fully acquiescent to her deprivations, her life now is a form of penitence without self pity.  She no longer pines for the arms of her lover of six years, a wealthy married restaurateur, Tom Sergeant, played by PBD veteran Peter Simon Hilton.

Hare uses a third character, Tom’s 18 year old son, Edward, performed by Harrison Bryan, his PBD debut, to set up the story at the opening and to provide some closure at the end.  Essentially, Kyra had become part of the Sergeant’s family.  She worked in the restaurant, but also on occasion looked after the couple’s son, all the while having a clandestine affair with Tom.  When Alice learned of the affair, Kyra made a hasty exit and had not seen Tom or Edward in the past three years.  Alice later died of cancer.  Then a year after Alice’s death, the Sergeant men descend upon Kyra, coincidentally neither knowing the other had been to see her.

Imagine the permutations ripe for guilt, recriminations, anger, and perhaps even a possible reconciliation in this trifecta of relationships, particularly in the hands of a playwright who is known for forceful acerbic dialogue.  Morosco makes sure that that comes through as a sparring match, a fast-moving chess game being played to stalemate.  And yet supposedly there is love still between Kyra and Tom.  And even between all the other characters, a bond of love that once broken ended up shattering everyone’s life.

That class problem -- the constant struggle of the haves and have-nots -- lives within this story of love and loss and finally emerges with all the pent-up recriminations.  The repartee between Kyra and Tom  shifts gears quickly, one feeling he or she has the upper hand, sometimes with explosive anger, and suddenly a beat, as the point lands home, only to find a complete reversal as the other counters.

Peter Simon Hilton effectively expresses Tom’s challenge, coming on strong with a swaggering superiority, wanting Kyra back, but on his terms.  He certainly has the means to offer her the comfortable life they once shared, but she ultimately rejects that in face of the sacrifice she has willingly chosen, to live frugally, to teach totally disadvantaged children and live an acetic life.  He deals with this rejection with a momentary breakdown showing his vulnerability.  His self assurance but a disguise.

And just as clearly, his character takes pride in being a bit of a raconteur.  Hilton’s performance is a master class of contradictions, ambivalence, patronizing, and at the heart of it all, guilt, of losing Kyra and Alice’s dying, saying she used her death as a way of punishing me.  It’s all about him.  Tom still loves Kyra, but it is based on trying to change her.  Hilton knows how to effectively deliver the comic line, so important in this weighty play.

Street is particularly effective in delivering her barbed accusations with pauses to watch Tom’s reactions and to allow them to sink in with the audience.  In a sense, all characters, including the off stage, now deceased Alice, were or are dependent on the rock steadiness of Kyra.  Sarah Street has careful command, while admitting to the ultimate vulnerability, her love for Tom (still), but her need to live her own life, without him.

Edward is played by Harrison Bryan with brimming over the top adolescent angst, clearly an angry teenager who is seeking help to deal with his father.  Bryan displays good comic chops and a borderline hyperactive impulsivity.  He is in disarray, his dress disheveled as is his personality, his shirttail hanging out, an excellent impression of the typical confused and outraged teenager.

Street actually cooks spaghetti sauce on stage left, chopping the ingredients, pouring the oil, etc.  At a certain point, the aroma reaches the audience, particularly the onions.  I thought it was an interesting touch by Hare and so effectively managed by the director.  Unfortunately, a good part of the play also takes place in the kitchen area and dialogue was sometimes unclear on the other side of the audience, stage right.  It’s one of my pet peeves, the director sacrificing (albeit unintentionally) the clear delivery of dialogue for a sense of realism on stage.

Also, although philosophically the themes resonate, I never felt the production or the playwright touched the inner core of true love which both Kyra and Tom profess; their true love is verbal sparring.  Hare clearly makes the choice of emphasizing, particularly in Act II, the “social forces blowing through the room.”

The scenic design by Bill Clarke is in keeping with the dark issues of the play, the dingy flat, books and rock posters of a 1990s intellectual nonconformist.  It is frigid there, so a space heater and heavy conversation is indeed needed to heat things up.

Costume design is by Brian O’Keefe, ranging from Sarah Street’s woolens, to Harrison Bryan’s student garb of the early 1990s to Peter Simon Hilton’s contrasting business attire, a wool suit, with vest and suspenders.  Lighting design is by Donald Edmund Thomas, again emphasizing the muted darkness, with lamps here and there and clearly some outside lights through the vaulted, but old windows through which we can see snow in the second act.  The sound design by Roger Arnold (his PBD debut) consists of some heavy metal music for scene changes, again, reminiscent of the era.

This play may not be emotive as a true love story, but it is packed with memorable dialogue and philosophical issues which still resonate today. 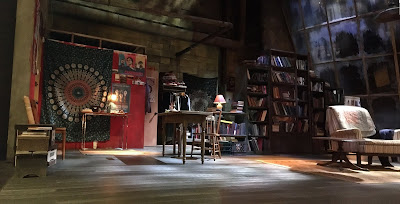