A Cuban Humanitarian Crisis in the Making 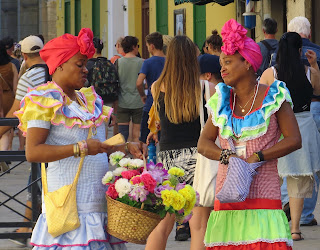 The Cuban people have been pursuing the benefits of becoming more of a capitalist society.  This was evolving even before President Obama made it possible for Americans to once again visit the island.  Since then it has been accelerating, particularly in the tourist related industries with cruise lines being able to dock there.  The Cuban tourist industry had been dependent on European and Canadian visitors, but after Obama’s effort at detente more Cubans secured governmental licenses to work as private entrepreneurs, mostly in the tourism and related industries.

The Trump administration has been diligently working on dismantling anything remotely connected with Obama.  It had been slowly reversing détente with Cuba and last week suddenly, without warning, went into high gear by eliminating “people to people” visits, including those by American cruise lines.  In one fell swoop, it cruelly damaged our relations with the Cuban people.   I underscore “people” as they are the ones who will mostly suffer this action.

Here was a golden opportunity to further win over the Cuban people, neighbors only 100 miles off shore. Instead, we could have undertaken a humanitarian effort to address food shortages (don’t our farmers have an excess of food capacity because of the China trade war?).  In part these shortages are due to the Trump administration’s U.S. trade embargo, as well as poor central planning by the Cuban government, and the decline in aid from Venezuela because of its political turmoil.  The confluence of all three has hastened a serious food shortage.

So much more could be won by continuing to help the Cuban people on their path to democratization by supporting their ability to make a living through entrepreneurship.  Many Cuban’s now make their living as guides, taxis drivers, managing B&Bs and running restaurants.

We were among the 800,000 who have visited the island via a cruise line, and as we had booked it before the first of the Trump reprisals went into effect, we were able to engage independent Cuban guides and tours without any effort.

Our guide in Havana said his main income now was from being a guide rather than work as a well educated engineer.  Our guides in Cienfuegos and Santiago de Cuba were now full-time guides, working for Cuban companies which would not have been possible only a few years before.  Each guide enlisted a driver for one of the old 50s cars for the day.  These men diligently and proudly keep up these old automobiles.  They cleverly fabricate parts which haven’t been available in decades.  They too have become victims of this ill conceived decree as well. Entrepreneurship is burgeoning in Cuba and we are helping to kill it.

To put a face on this argument, here are the guides pictured with Ann: 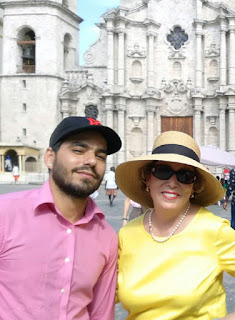 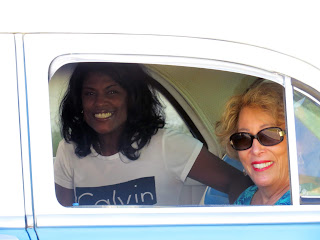 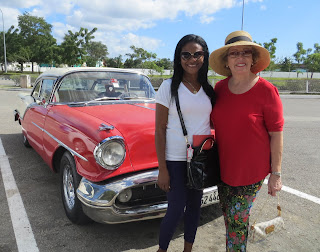 A strategy of working with the Cuban people on the one hand, and negotiating with the government on the other would seem to be preferable.  It certainly was bearing fruit under the Obama administration.  It is yet another failure of the cold and compassionless Trump administration; I feel for the Cuban people.  Those we met had such high hopes that American tourism would lead them all into greater prosperity and increase the chances of repairing relations between governments.  I can imagine how this cruel act will be turned into anti-American fodder by the Cuban government.