Time Machine to the 19th Century 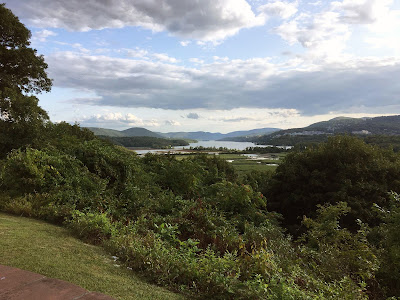 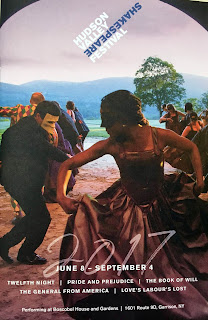 We boarded our Ford rental and dialed the year mechanism back in time.  We fortuitously landed in the early 19th century when Jane Austen was publishing her iconic books to find ourselves in picturesque Garrison, New York overlooking the Hudson Heights where Kate Hamill’s adaptation of Austen’s Pride and Prejudice was being performed as part of the Hudson Valley Shakespeare Festival.  The journey back in time took us through the verdant hills of Connecticut and then New York, arriving at our hotel for an overnight stay only to realize we forgot something important: we were supposed to pack our folding chairs for the atmospheric picnic on the sprawling lawn which everyone enjoys before the evening performance as well as for a talk by the author herself, Kate Hamill, who also stars as the irresistible Lizzy in the play.  What to do?  Wal-Mart to the rescue!  So we dialed back to 2017 and a nearby Wal-Mart super store where we found two inexpensive folding chairs.  What a way to start a time journey.

Back to the early 19th century we strolled from the parking lot of the Boscobel House and Gardens, through a rose garden no less, where a Shakespearean tent and stage has been erected for the summer.  We found a perfect little table for our dinner, Ann with her requisite Cabernet, with dainty chairs already provided.  Who knew?   So, we ate and enjoyed watching others set up blankets and chairs on the lawn for their own feasts. 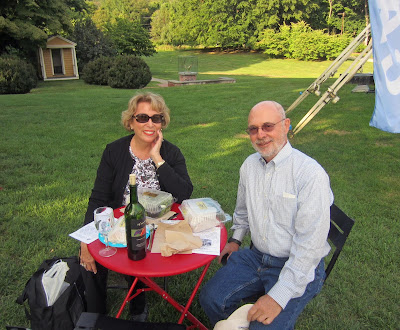 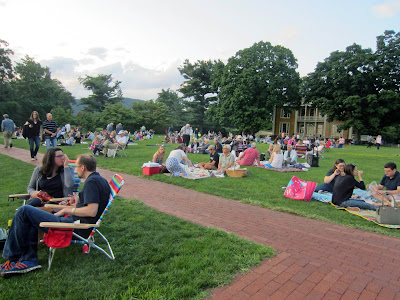 Meanwhile a table (and more chairs!) was set up for a rare and sparkling interview with Kate Hamill who we learned is now in the process of creating adaptations of all of Jane Austen’s works, Ann having already loved her first inventive endeavor, Sense and Sensibility at the Folger Shakespeare Theatre in Washington last year.  Hamill comes to authorship via way of the stage and she is a damn good actress, saving the centerpiece role of Lizzy for herself of course (why not, she’s the boss, and she fits and acts the part perfectly!). Hamill is to the left in the photo below. 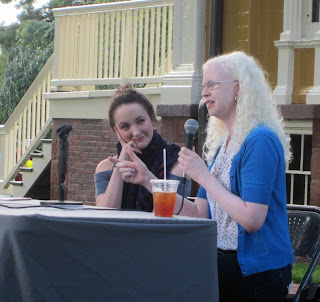 After her talk and some time for the picnickers to finish while the sun was setting to the west of West Point which can be seen in the distance, we went to the tent to find our seats and enjoy the show.  I’m not writing a full blown review.  Hamill has chosen farce as the ideal vehicle to present the work, has appropriately “killed off” Kitty who is really superfluous to a dramatized version, and has several male members playing two or more roles, including some of the female roles.  The characters are now almost caricatures.  We’re talking belly laughs at times, a riotous, imaginative adaptation, but one which left us feeling it was somewhat irreverent.  But that is merely a personal opinion, preferring a more straight forward dramatization.  Of course we have enjoyed it many times on film and only once on stage in London, so Hamill’s production was certainly different.  The acting and directing was what you would expect from experienced Shakespearean actors.  So, all in all, it was a wonderful evening. 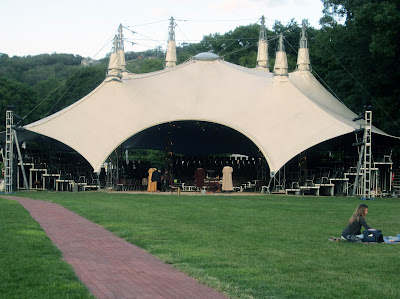 Afterwards, we set our time clock back to the 21st century and drove to our hotel on the winding dark roads.  In the morning, we were really looking forward to visiting the real star of the weekend, a tour of Boscobel itself. 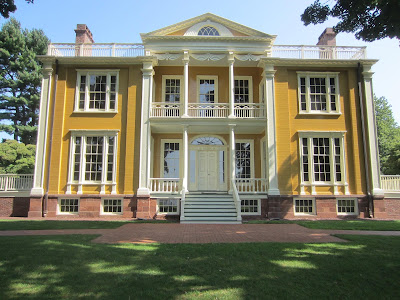 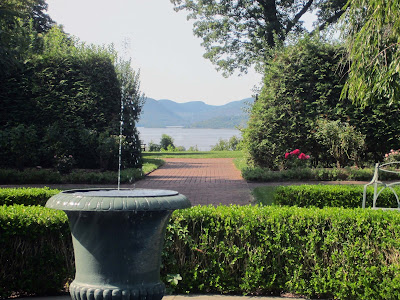 After checking out, back to the early 19th century and the magnificent, unique, beautiful Boscobel House.  This home was built in Montrose, NY in 1808 and after being scheduled for complete demolition in the mid 1950s was rescued, piece by piece, by a historical-minded group of locals, including an endowment from The Readers Digest cofounder and was painstakingly moved to its present site in Garrison, some 15 miles away, with a similar view of the Hudson.  No expense was spared over the years to reproduce with precision the way the house looked when its original owner, Morris Dyckman, built it and furnished it between 1804 and 1808, only a few years before Pride and Prejudice was first published.  From the floorings, the furniture to the wallpaper, all recreated either by hand or reproduced down to the most exacting detail.  All perfection. 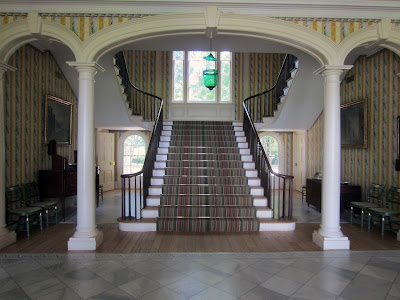 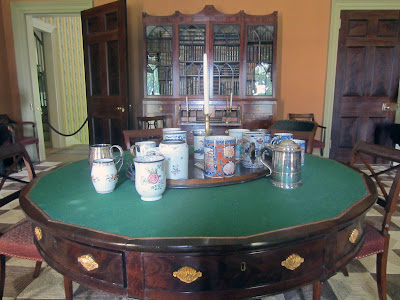 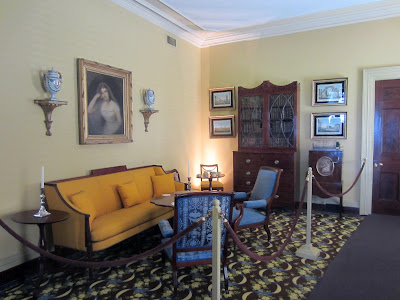 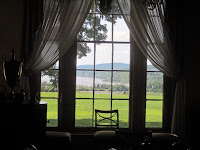 The home itself, with its views, is breathtakingly elegant, and beautifully maintained with historical exactitude.  One gets a very real sense during the small group tour of what it must have been like to live in those times, albeit as a very wealthy person, Boscobel not being your run-of-the-mill abode.  There was much ingenuity as to how natural light and ventilation are used and simple contrivances to make their lives a little easier.  Alas, no Internet or plumbing or central heating, but much reading, music, card playing, camaraderie, pleasures we of the 21st century survivors club have somewhat left behind. 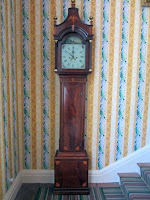 There was a astute appreciation of history, architecture and the Federal style furniture which made this home stand out in its unusual neoclassical design.  It is as memorable as our tours of Emily Dickinson’s home, Thomas Jefferson’s, The Biltmore in Asheville and many others we’ve visited over the years, maybe more so because of the meticulousness of how it’s been preserved.  Where original artifacts were not longer extant, they’ve been carefully reproduced.  Absolutely nothing has been ignored in this process.  A mere look at the 200+ year old wind up Grandfather clock, with its original mechanism and still operating, speaks volumes about the care to preserve history. 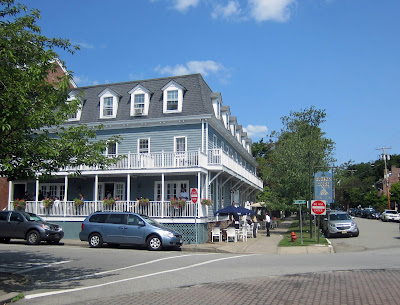 After the tour we again took in the breathtaking views of the Hudson Heights and West Point, explored the gardens and then went into nearby Cold Spring to have a late lunch at the Hudson House which has been in operation since 1832, only one year before the Collected Works of Jane Austen was first published, some 15 years after her death.  Her works have never gone out of print since.  Naturally, Hudson House is on the Hudson River so we were still well ensconced in the 19th century before dialing 2017 on our Ford time machine, climbing and gliding down the winding, hilly back roads, returning to our interim home at our boat club in Connecticut. 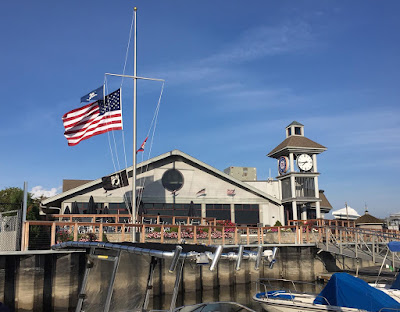