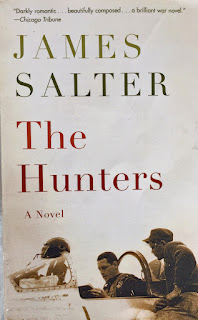 How many men start out as an F-86 pilot during the Korean War and then become a writer over the next 50 years?  James Salter wasn’t prolific, but great nonetheless.  I had already read what has been considered his best works, Light Years,  All That Is and A Sport and a Pastime

I’m generally not “into” war novels (although will never forget reading Herman Wouk’s The Winds of War and War and Remembrance, tears streaming down my face reading the concentration camp chapters), so to this point I had avoided Salter’s first novel, The Hunters.  Perhaps this is also because I had seen the movie version on Turner Classic Movies, staring my favorite film noir actor, Robert Mitchum (also with Robert Wagner and May Britt).  The novel is very different from the film, hardly bearing any resemblance, other than a story of F-86 fighter pilots during the Korean War.  Salter’s novel is so superior, but of course it’s literature, not Hollywood.  Salter must have agonized over the changes that were made to his novel for the screen version.

Cleve Connell arrives at Kimpo air base at the height of the Korean War.  There, the F-86 pilots do a dance of death with their MIG-15 enemies.  Connell learns this dance means to hunt or be hunted, kill or be killed, a path to fame or ignominy. 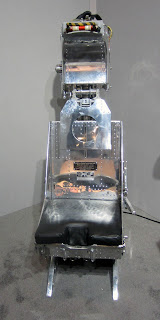 The wonder of flying, only decades after flight itself was pioneered by the Wright Brothers, is encapsulated by Salter, an experienced F-86 pilot.  This novel could not have been written without that credential or by a person indifferent to the joys of flying.  Cleve is ready for one of his early missions, congregating with the other pilots while waiting to go out to his “ship” as they referred to their F-86’s:  He was not fully at ease. It was still like being a guest at a family reunion, with all the unfamiliar references. He felt relieved when finally they rode out to their ships. Then it was intoxicating. The smooth takeoff, and the free feeling of having the world drop away. Soon after leaving the ground, they were crossing patches of stratus that lay in the valleys as heavy and white as glaciers. North for the fifth time. It was still all adventure, as exciting as love, as frightening. Cleve rejoiced in it.

Cleve fantasizes about turning his flying skills into a sport, becoming an ace (5 kills).  He romanticizes to his wingman, while being aware that it’s not necessarily the best prepared pilots who become aces:  Odd. Everything about this ought to be perfect for you and me. Here we are, by sheer accident, in the most natural of worlds, and of course that means the most artificial, because we're very civilized. We're in a child's dream and a man's heaven, living a medieval life under sanitary conditions, flying the last shreds of something irreplaceable, I don't know what, in a sport too kingly even for kings. Nothing is missing, and yet it's the men who don't understand it at all that become its heroes.

By then, though, he is already transitioning into some self doubt, even after a brief burst of confidence after his first kill.  Soon he sinks into an even larger sinkhole of remorse, and finally finding an acceptance of his self worth in the end.  He is tormented, directly or indirectly by his arch rival, Pell, a man he learns would claim unsubstantiated kills or even put his wing-man in harm’s way to get a kill….he hated Pell. He hated him in a way that allowed no other emotion. It seemed he was born to, and that he had done it from the earliest days of his life, before he ever knew him, before he even existed. Of all the absolutes, Pell was the archetype, confronting him with the unreality and diabolical force of a medieval play, the deathlike, grinning angel risen to claim the very souls of men. When he dwelt upon that, Cleve felt the cool touch of fear. There was no way out. He knew that if Pell were to win, he himself could not survive.

But these opportunities for wins frequently were the consequence of just sheer luck.  The squadron flew three or four missions a day and pilots are not assigned to all.  Some came back their noses blackened, the fuel tanks dropped, indicating a dog fight while others do not see MIGs during the entire mission.  Cleve’s pick of the litter tended to be in the latter category while Pell’s were in the former, so no wonder.

The Hunters is a well developed novel, gathering momentum to the end, becoming so compelling one can’t put the book down the deeper you get into it.  Although a war novel, it is written by a then young writer whose prose, you can tell, would lead him to greatness, not in the air, but on the page.